magazine
Birthday Bucket List of The Week: Dinner in The Sky

This 'Birthday Bucket List of the Week' will take you to a dining experience with a view. We all love to gather with friends for a family style feast at our favorite restaurants. But imagine getting together with your nearest around a dinner table with a fancy chef cooking a private dinner for your birthday celebration. You are then you are hoisted into the sky, suddenly you find yourself hovering above some of the world's most picturesque settings and famous monuments. You are eye level with soaring birds and dining amongst fluffy white clouds as you fly through the air like Peter Pan. A child's dream come true? Absolutely. 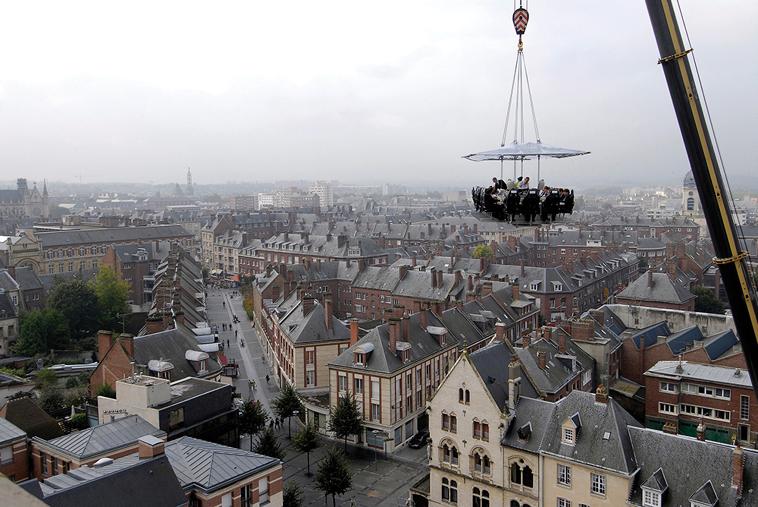 In 2006, Hakuna Matata, a communications agency specialized in gourmet food, and The Fun Group, a company who specializes in amusement park installations, came together to make this Peter Pan child’s dream come true with a flying dinner table! The first flight was affectionately called Dinner in the Sky, and it served as the unique venue for 22 young and brave European restaurant owners. Since it's first flight, Dinner in the Sky has been found floating amongst the clouds in 45 countries. 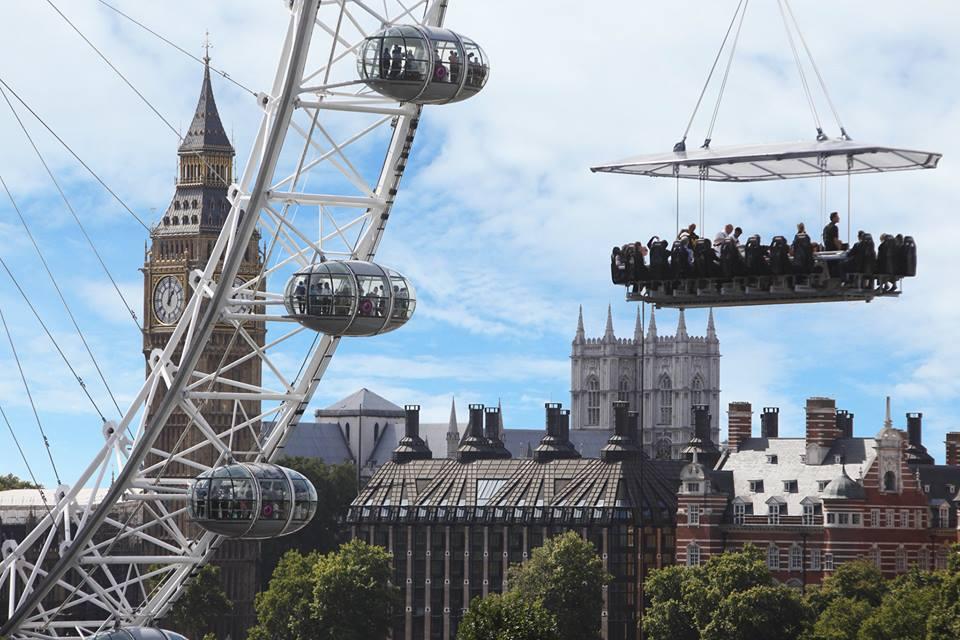 Since it's inception, the group has arranged over 5,000 events in cities across the globe! They have hosted incredible exclusive dinners like the time they produced an event in Monaco for Prince Albert with France’s most highly ‘starred’ chef, Joel Robuchon. They have also created new concepts such as a Beach Bar in the Sky, an Opera in the Sky with Lesley Garrett singing at the Tower of London, an Internet Café in the Sky for Nokia in Las Vegas and a PokerMatch in the Sky at the Grand Prix Moto of Jerez. 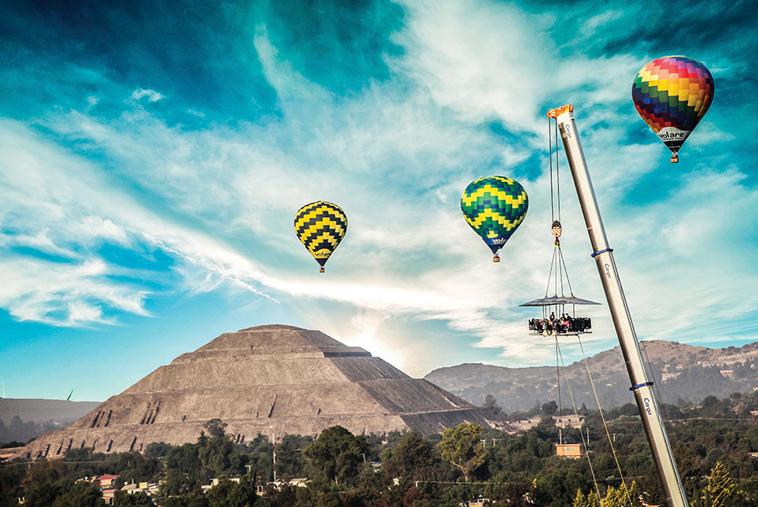 "We flew over the most magical places imaginable: the Strip of Las Vegas, the gardens of the King David Hotel, the Marina of Dubai, the hills of the Villa Borghese, the banks of the St. Lawrence River, the beach of Copacabana and Cape Town bay, to name a few… The world’s leading media showed their interest in the concept: ABC, NBC, TV Globo… the Herald Tribune, Le Monde, the Frankfurter Algemeine… People Magazine, Elle, Forbes… World renowned celebrities took their place at the dinner tables: Prince Albert of Monaco,Hiromi Izawaki, Oscar B. Goodman… The originality of the event’s concept and its effectiveness were recognized via a Globe Award in Boston, the SMB Advisor Award in Dubaï, a Trophée Heavent in Deauville…"

"This kind of success was possible thanks to the 2 golden words guiding all our activities: Exclusivity and Safety. The sky is a dream that has always fascinated human beings. Today people want to have extraordinary experiences, each dreaming of something different from his neighbour." 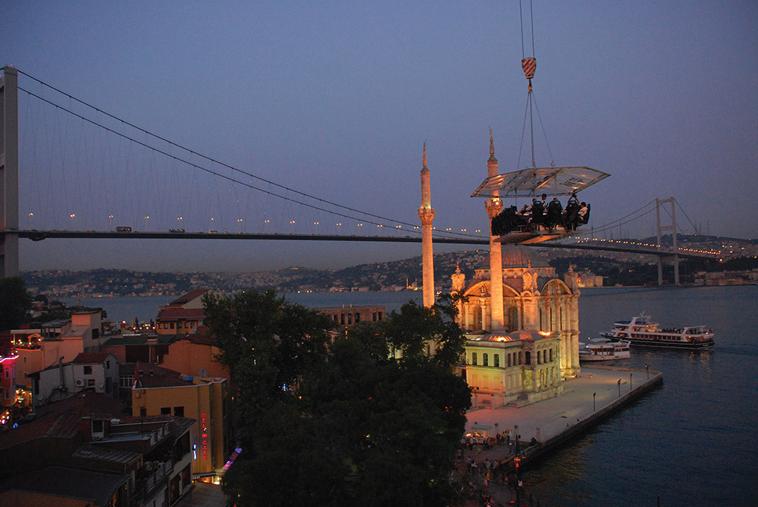 Events in The Sky

Guess what?? They also own a company called Events in the Sky, which offers wants to offer experiences like a wedding above the Grand Canyon,  a three-star dinner in the skies above the Jardins des Tuileries gardens in Paris,  a piano concert overlooking Sydney Bay or a cinema showing above the Bay of Angels in Cannes!

Envision drinking a glass of Champagne with friends while listening to the sounds of Ghanaian drummers or sipping Brandy while enjoying a fine Havana cigar. Perhaps a round of baccarat while being entertained by French Cancan dancers is your dream? Your wish is their demand. 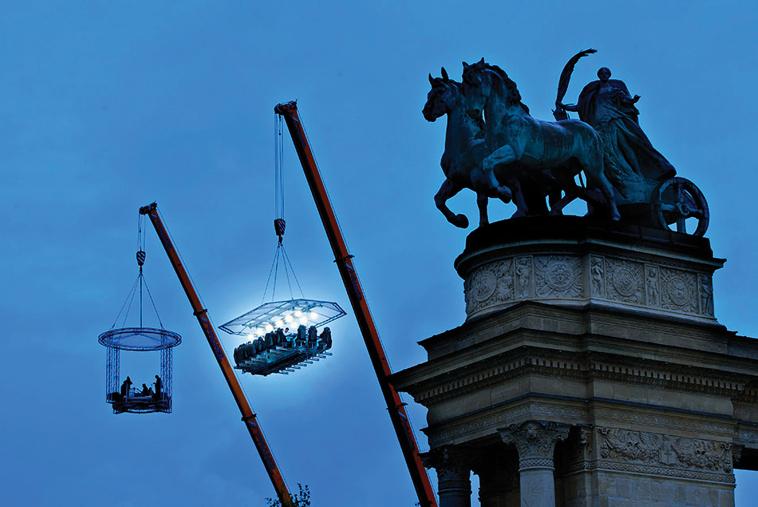 Now, Get Out And Gather!

Visit Dinner in The Sky and Events in The Sky to find out about upcoming events.

One of the upcoming dinner parties that we would love to be at? On November 1st, Dinner in The Sky Baja is hosting a wine pairing dinner over the vineyards of Valle De Gaudalupe with the company of sommelier and chef de Baron Balche.

Birthday Bucket List: Have a Candlelit BBQ on the Beach at A Luxury Resort in Vietnam!

London’s Calling, with A Geo-dome Rooftop Bar Overlooking the Thames