If you were to trace Delhi, Agra, and Jaipur on a map, you would see that these three north-west Indian cities roughly form an equilateral triangle. A haven for historical sites, including Delhi’s Red Fort, Agra’s Taj Mahal, and Jaipur’s Hawa Mahal, means there’s no shortage of cultural splendour to enjoy while journeying along this route (hence, the ‘golden’ title). However, to really make the golden triangle shine, you’ll want to add a few five star hotels into the mix. Luckily, this region has no shortage of incredible hospitality options, from cosmopolitan retreats to luxury hotels with awe-inspiring vistas that overlook the country’s most remarkable sights. For those who love their history with a side of high-quality hotels, read on for your complete guide to the Golden Triangle’s most remarkable properties. 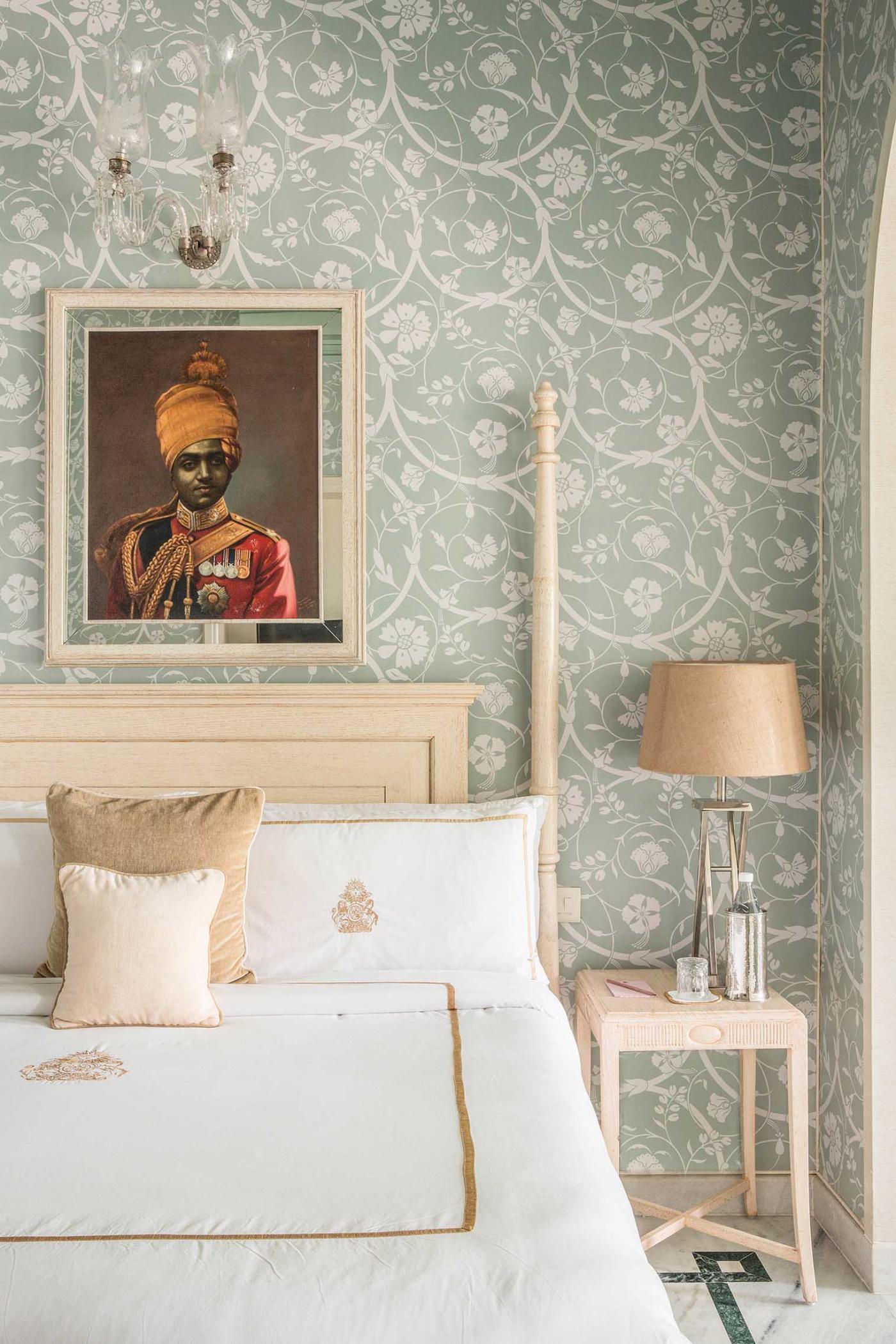 Within New Delhi you’ll find The Oberoi, which recently reopened after a 21-month long refurbishment that cost over $100 million. Reflecting the spirit of the city, the interiors blend a contemporary and traditional aesthetic. Take for example the metal screen at the glossy hotel’s entrance, which is composed of flexible hexagons in shades of deep orange, white and ultramarine, which pay tribute to the sacred Indian concept of hospitality known as ‘atithi’ which in Sanskrit means ‘one who is without an arrival date.’ While in town, be sure to spend time exploring Old Delhi as well, where you’ll find hectic bazaars filled with street vendors flipping and frying delicious North Indian cuisine and cheeky monkeys roaming free across loose electrical wires overhead. (Doubles from $390). 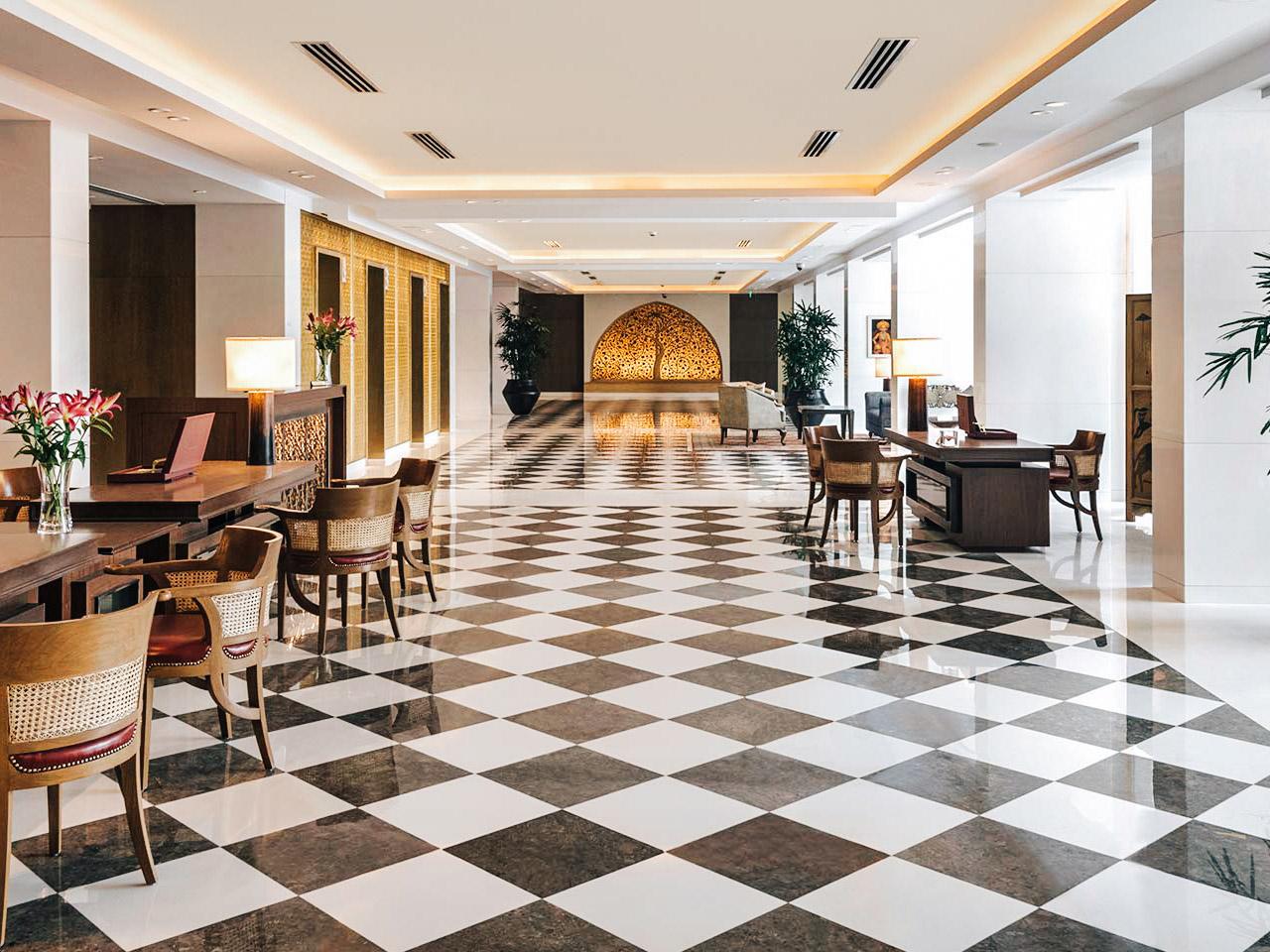 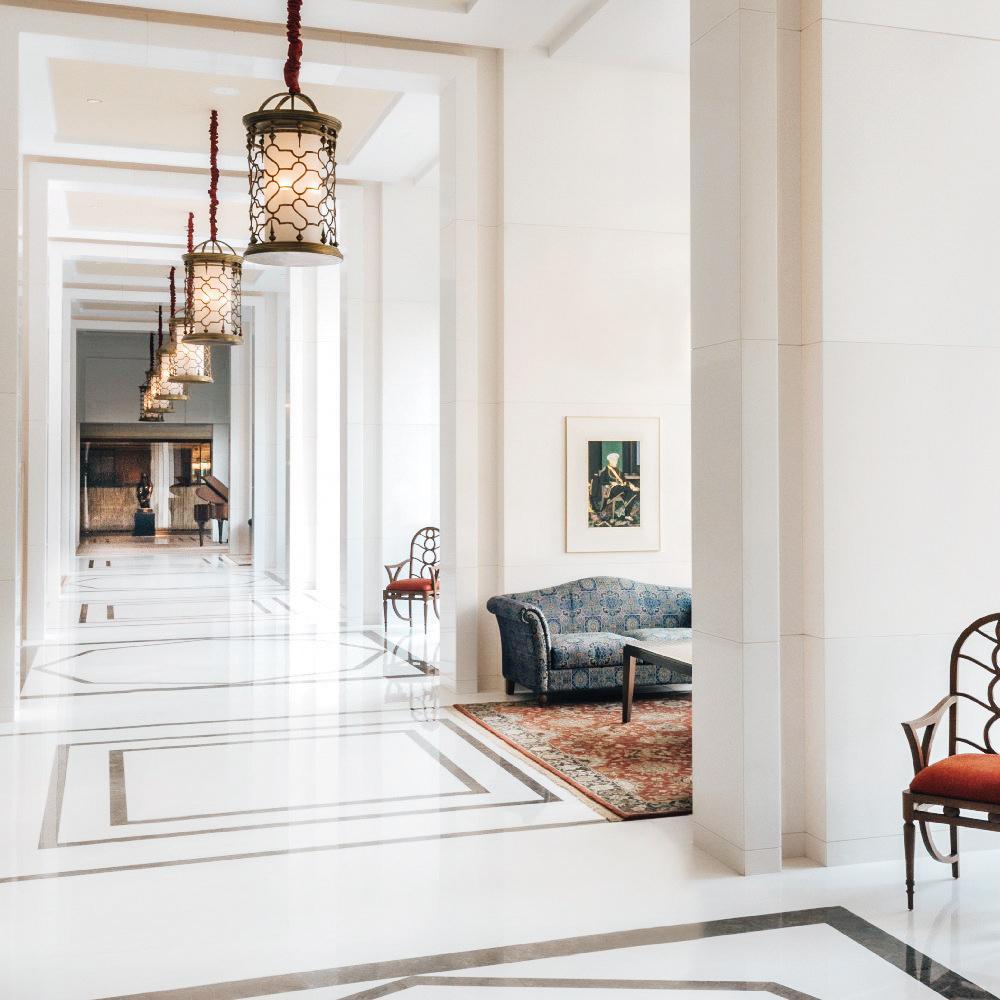 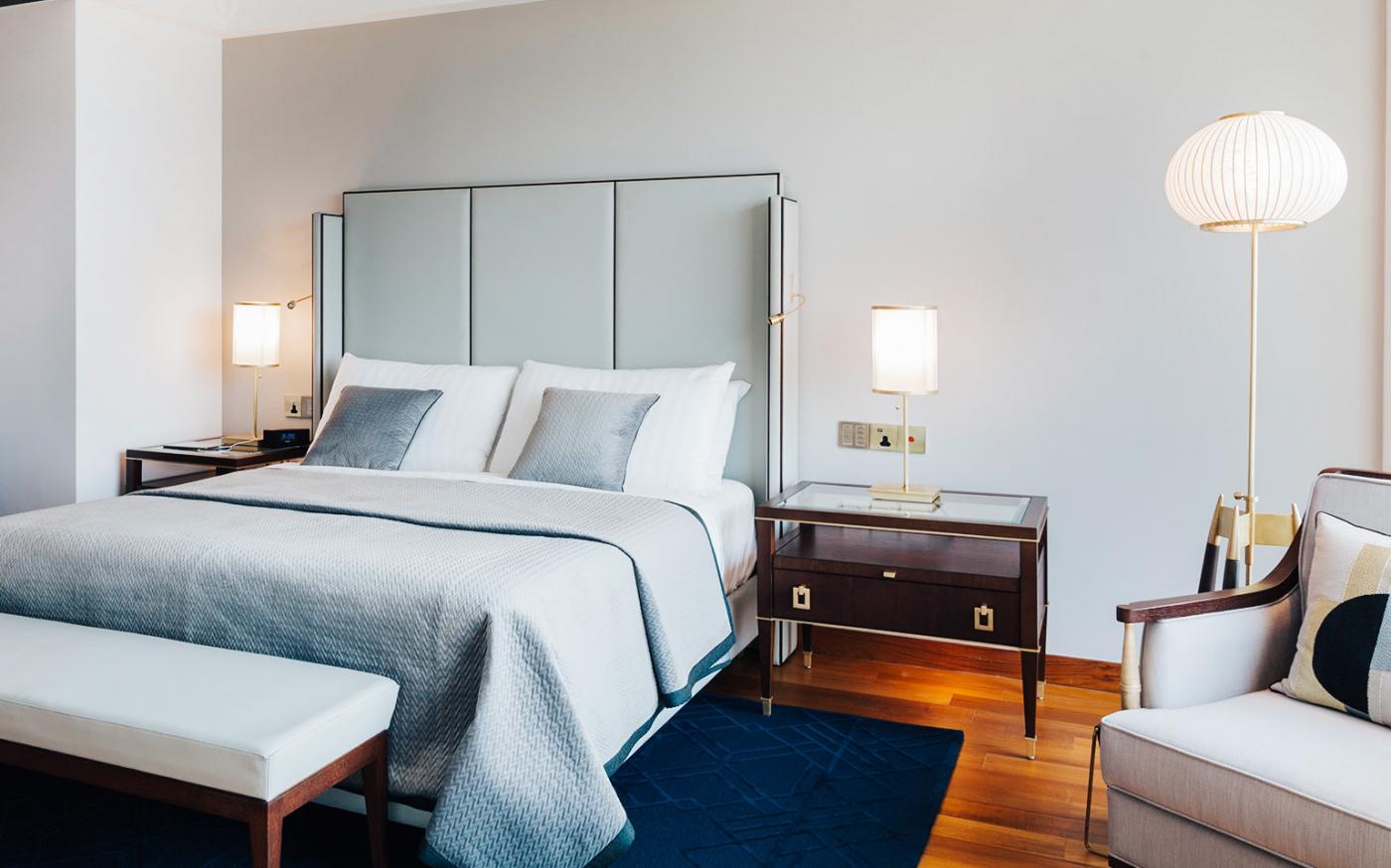 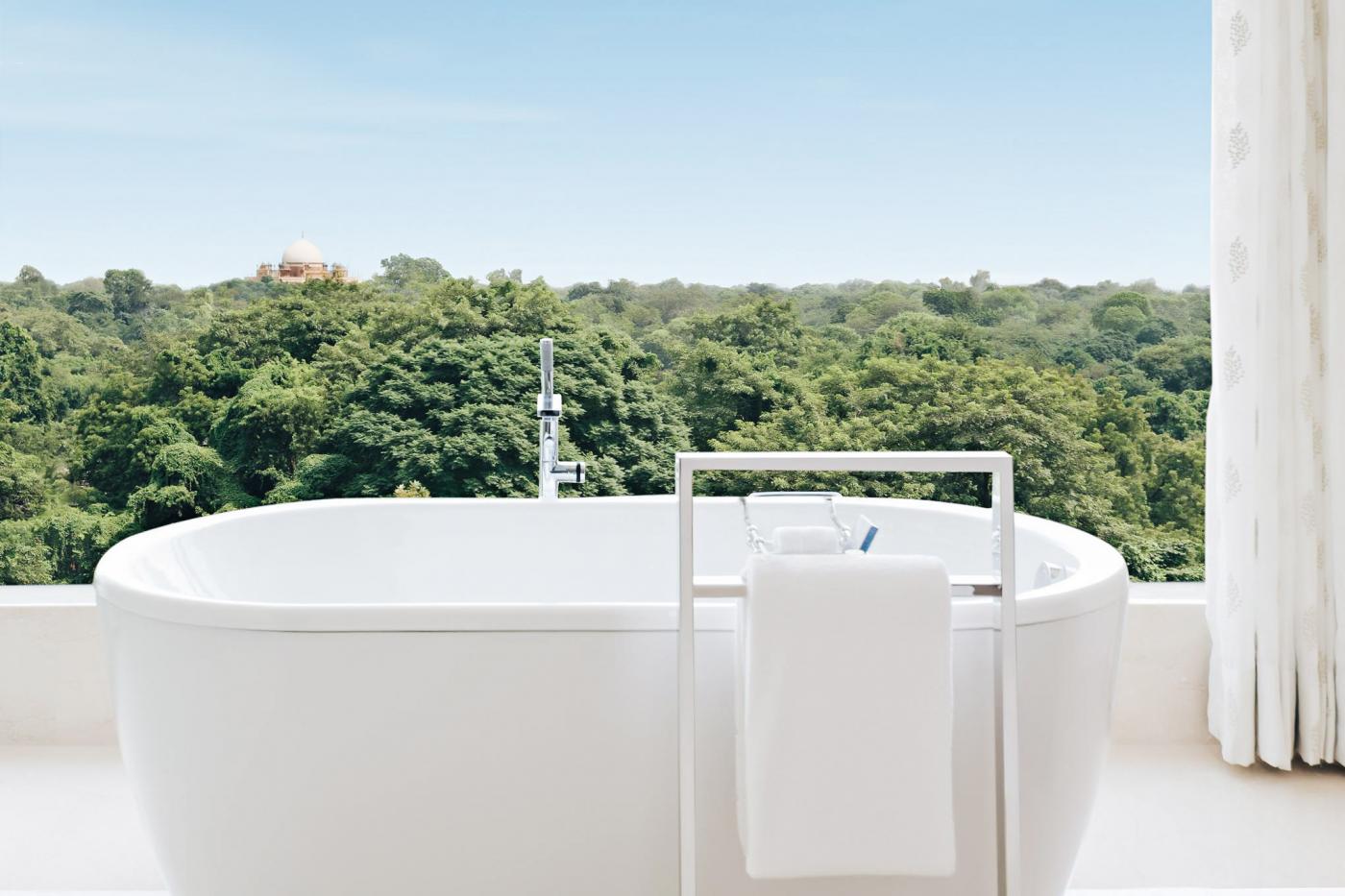 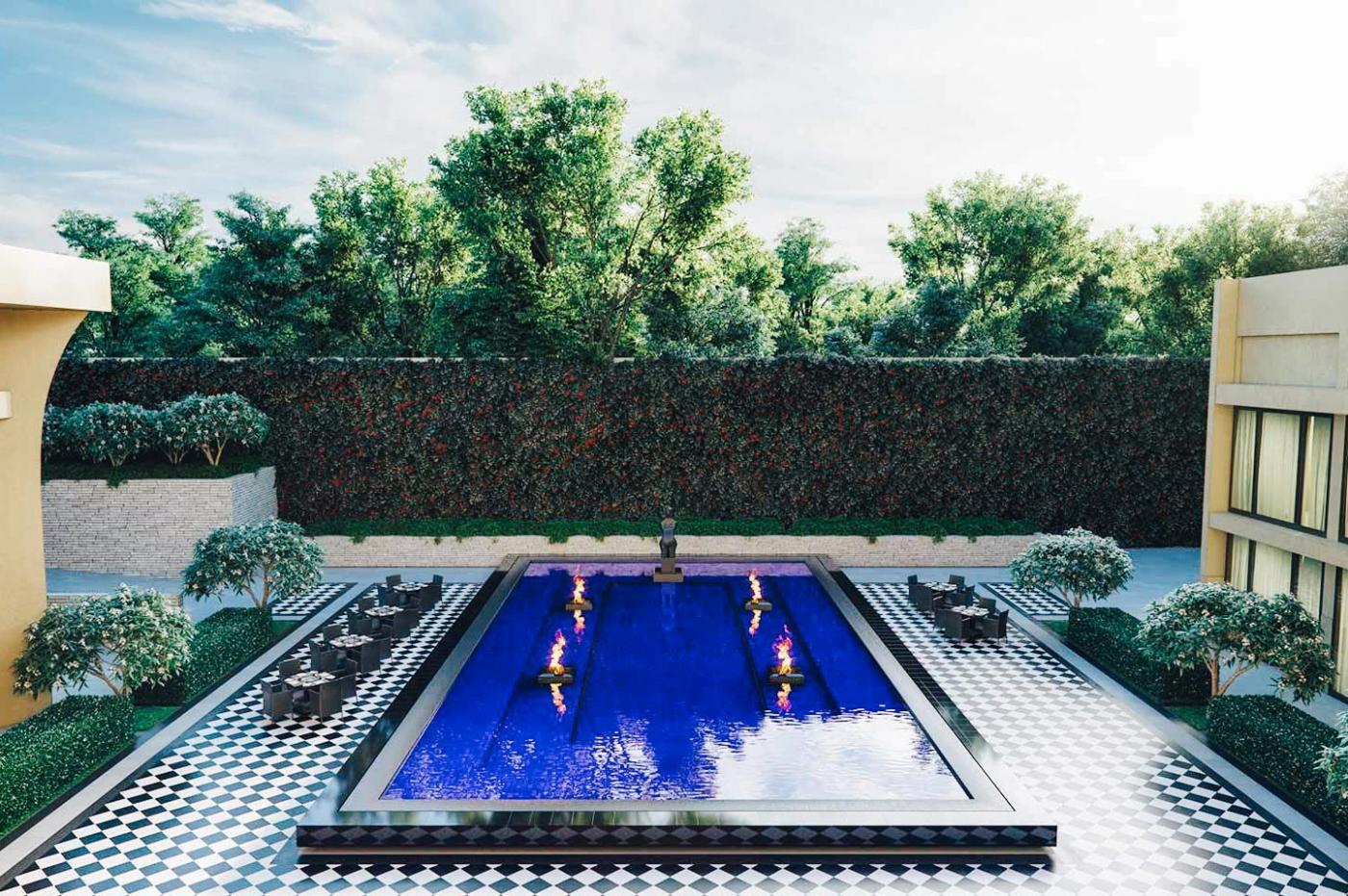 Agra is home of the wondrous Taj Mahal, one of the most brilliant manifestation of the Mughal dynasty’s design aesthetic. Enjoy views of the glistening white marble and minarets from Oberoi Amarvilas, where a view of the Taj Mahal is available from every guest room. The lake-size swimming pool is just as majestic, as are the terraced lawns, fountains, and reflection pools. What’s more, Amarvilas is only 600 meters from the wondrous Taj, with the hotel offering a golf cart service to drop you off at the footsteps of the seventh wonder of the world come sunrise and sunset. (Doubles from $772). 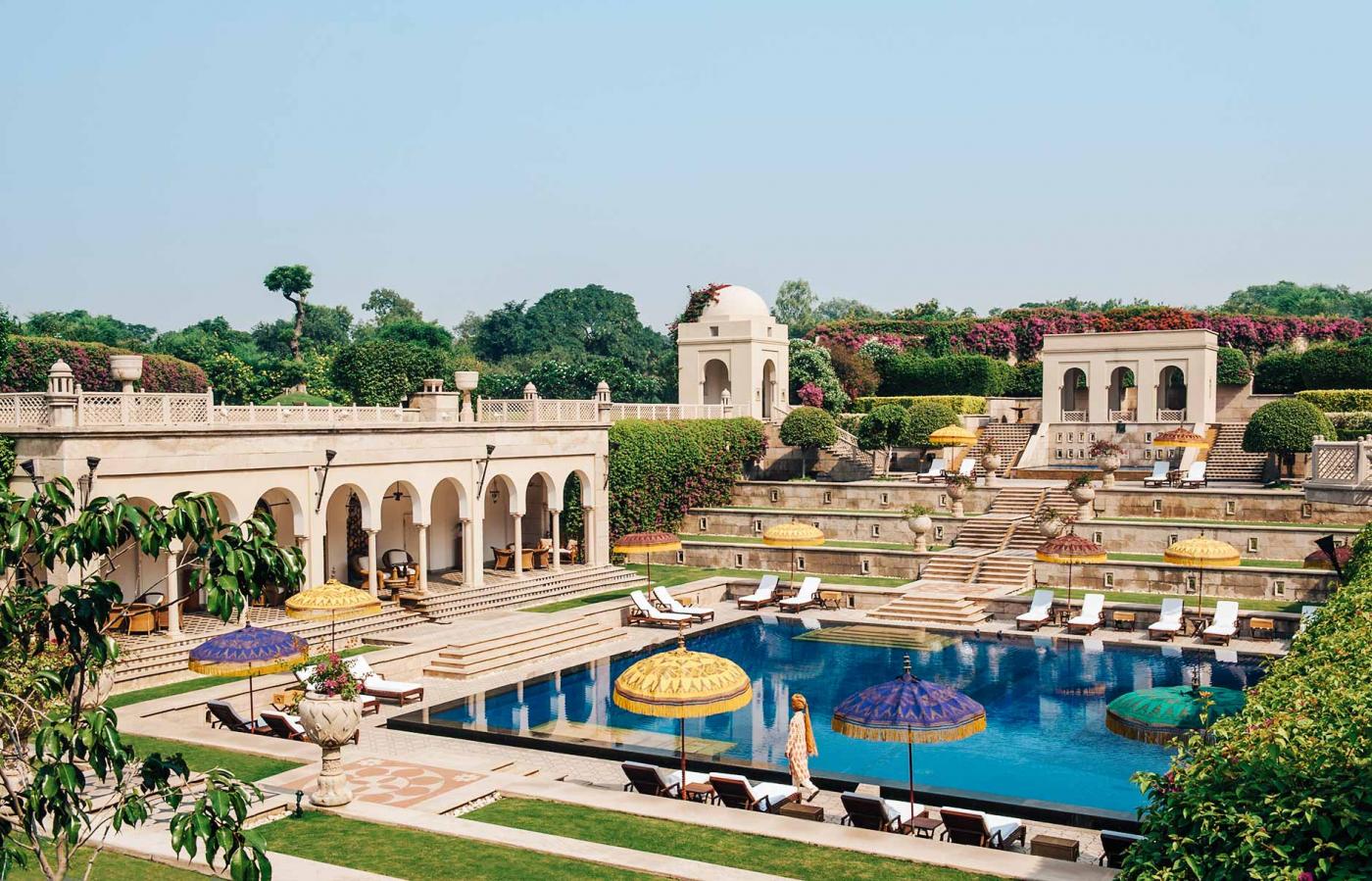 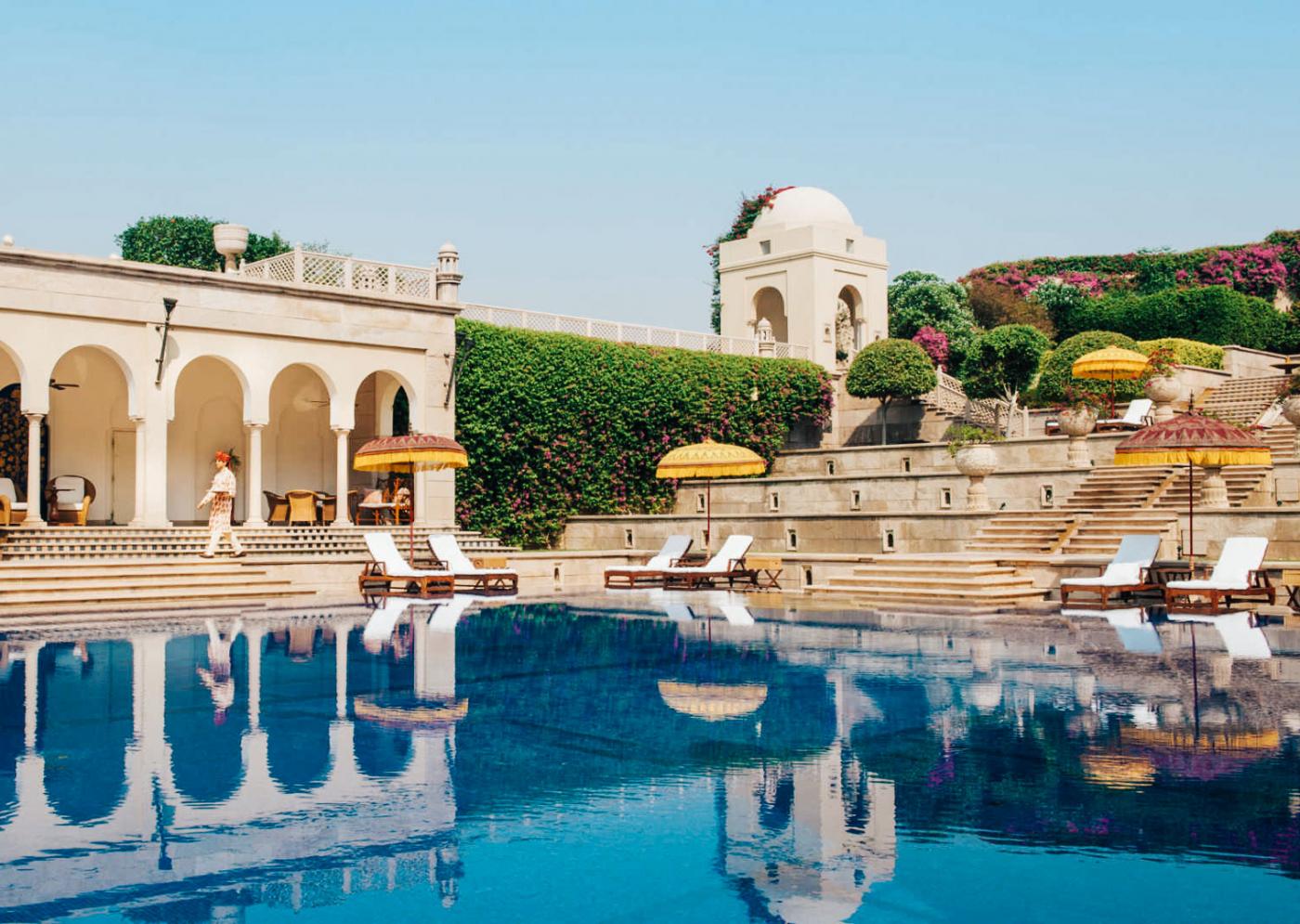 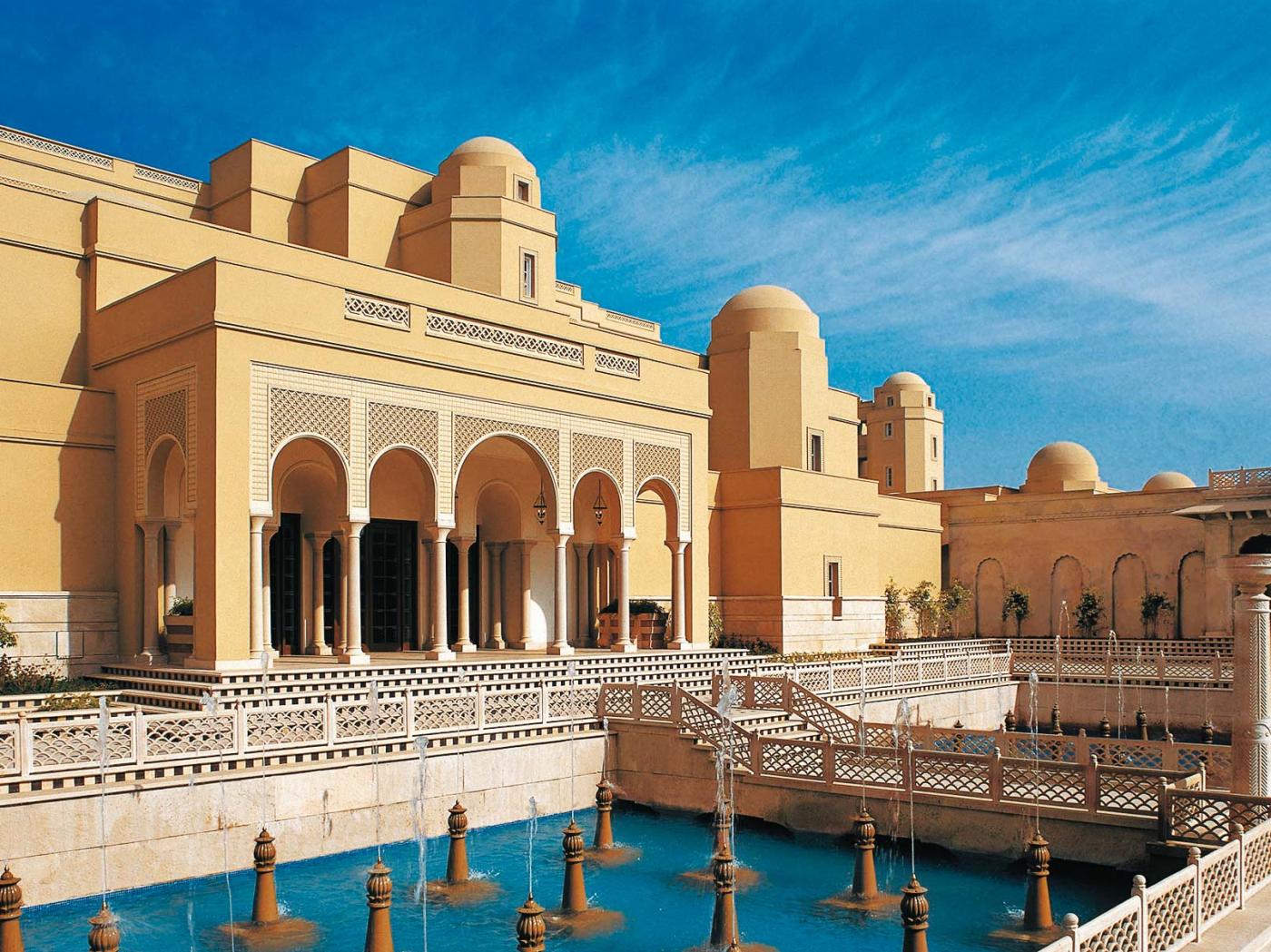 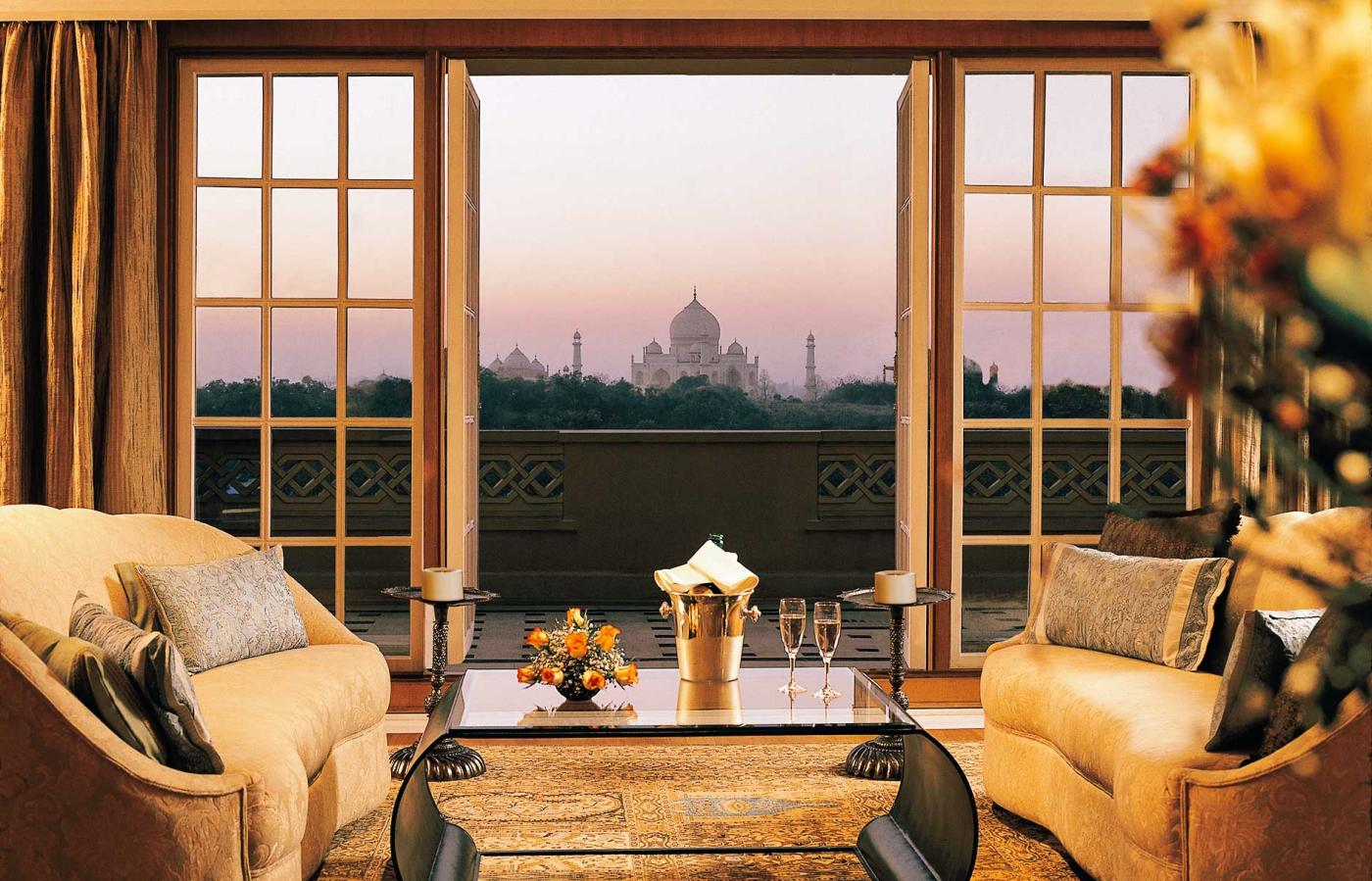 Built in 1729 for the ruling family of Jaipur, this pink palace is one of the most beautiful destinations in all of the Pink City. For many years it served as the British Residency, before becoming the private residence of the beloved His Highness Maharaja Sawai Man Singh II of Jaipur – the celebrated and dashing ‘Jai’ – and his wife Maharani Gayatri Devi. Over the decades, the palace has hosted legendary guests such as Her Majesty Queen Elizabeth II, as well as international celebrities including Jackie Kennedy. After reopening in 2015 after a three year remodel, this historic palace is as luxe as ever with exquisitely colorful interiors that pay tribute to the city of Jaipur while perfectly appealing to the design-savvy jetsetter. (Doubles from $330). 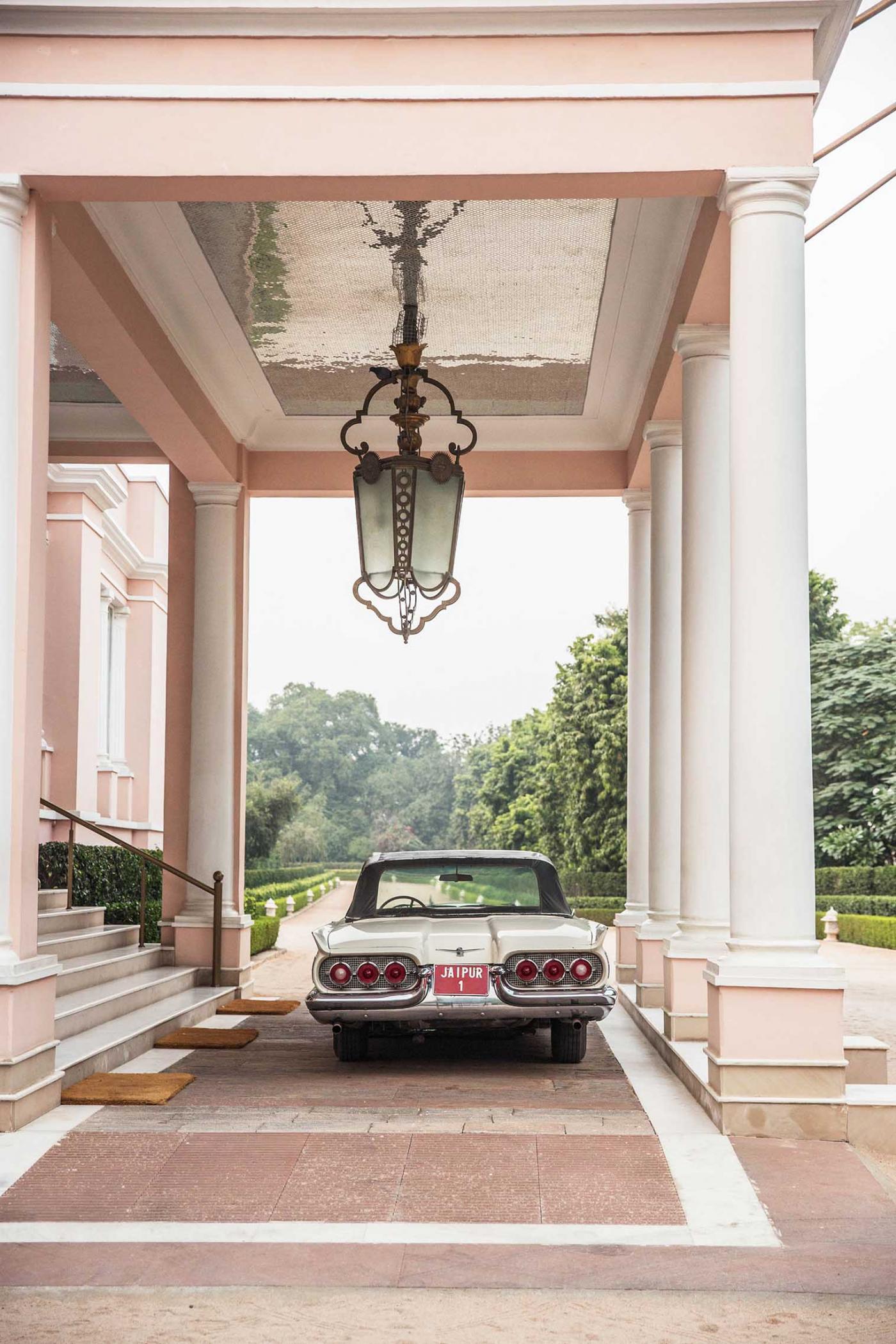 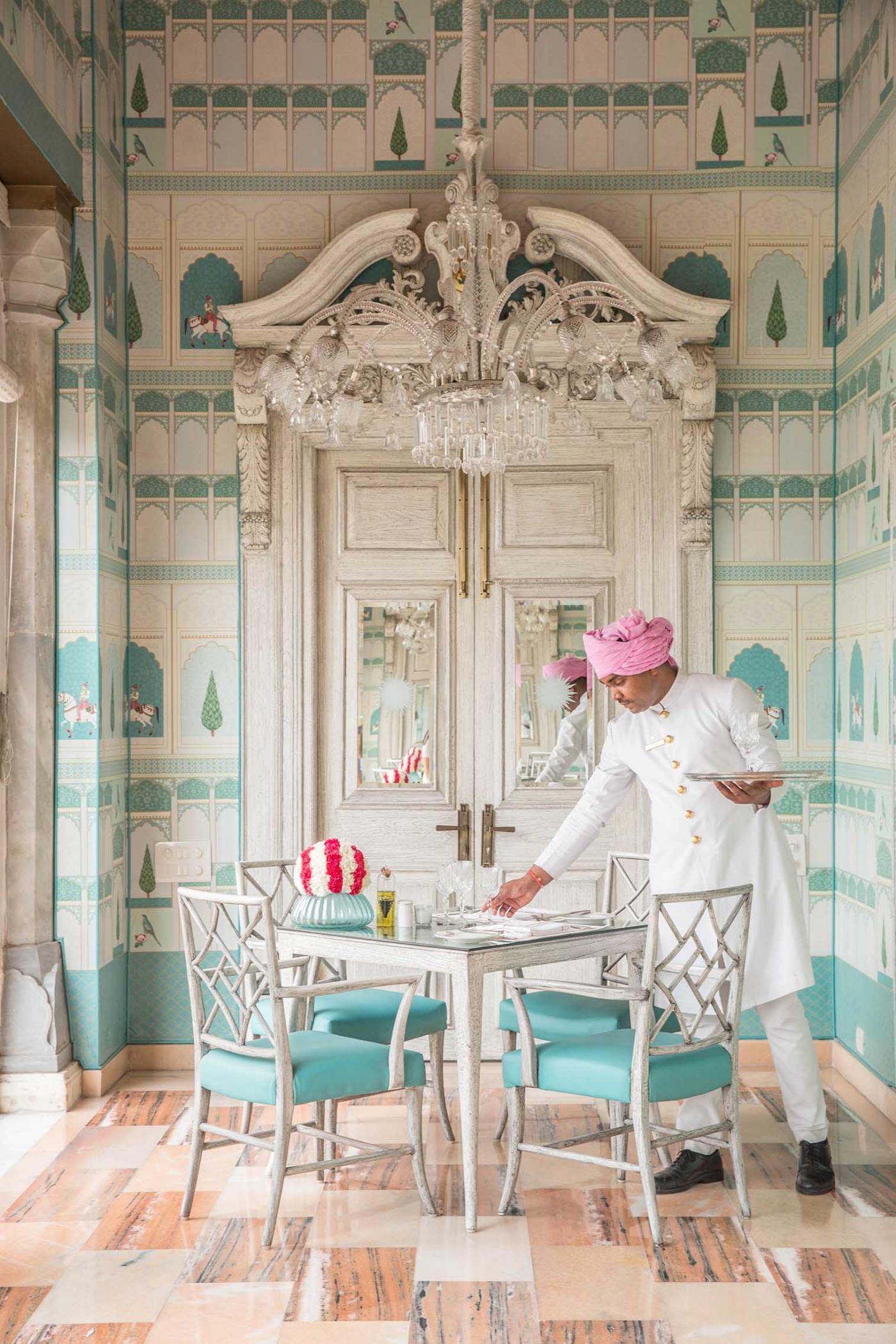 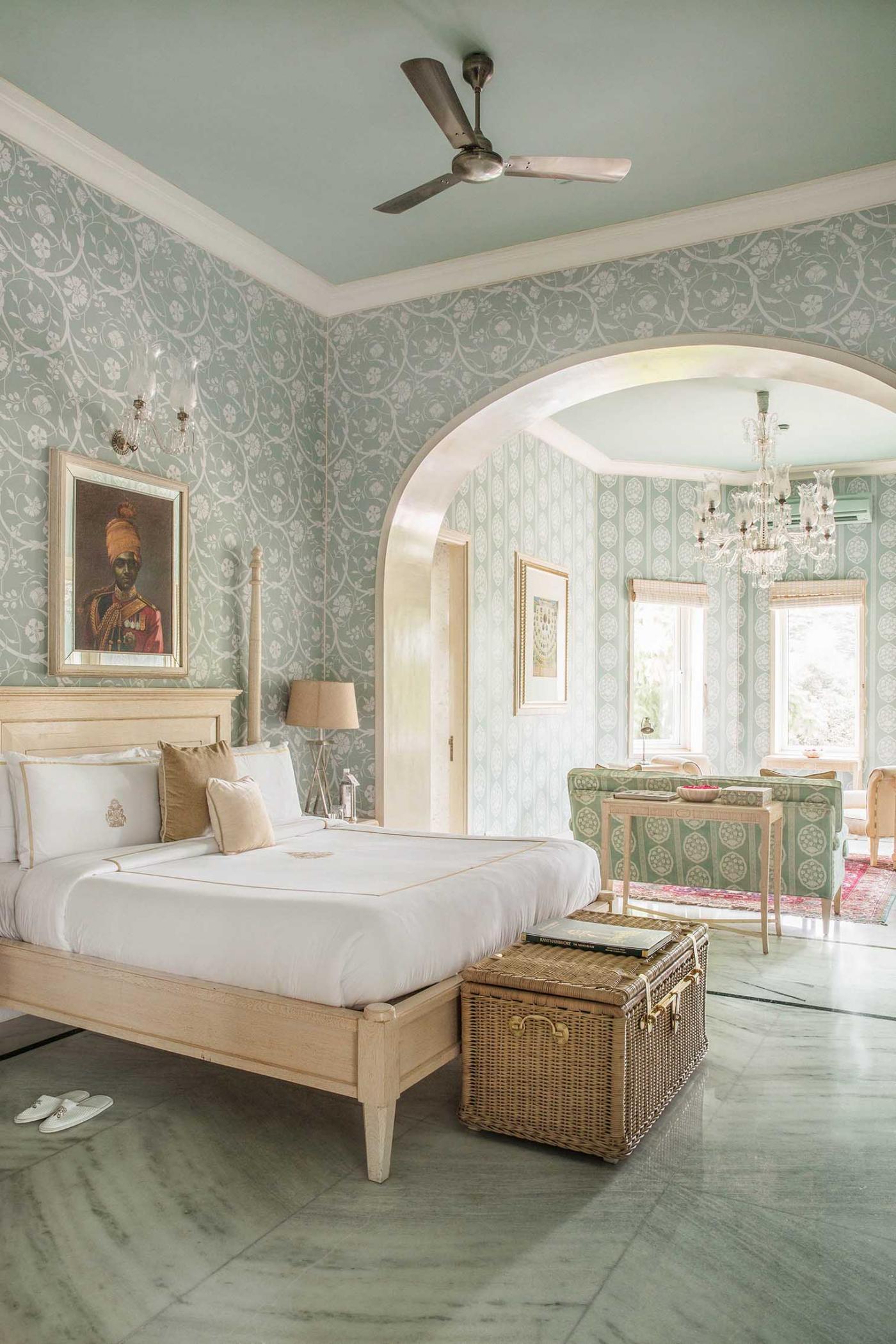 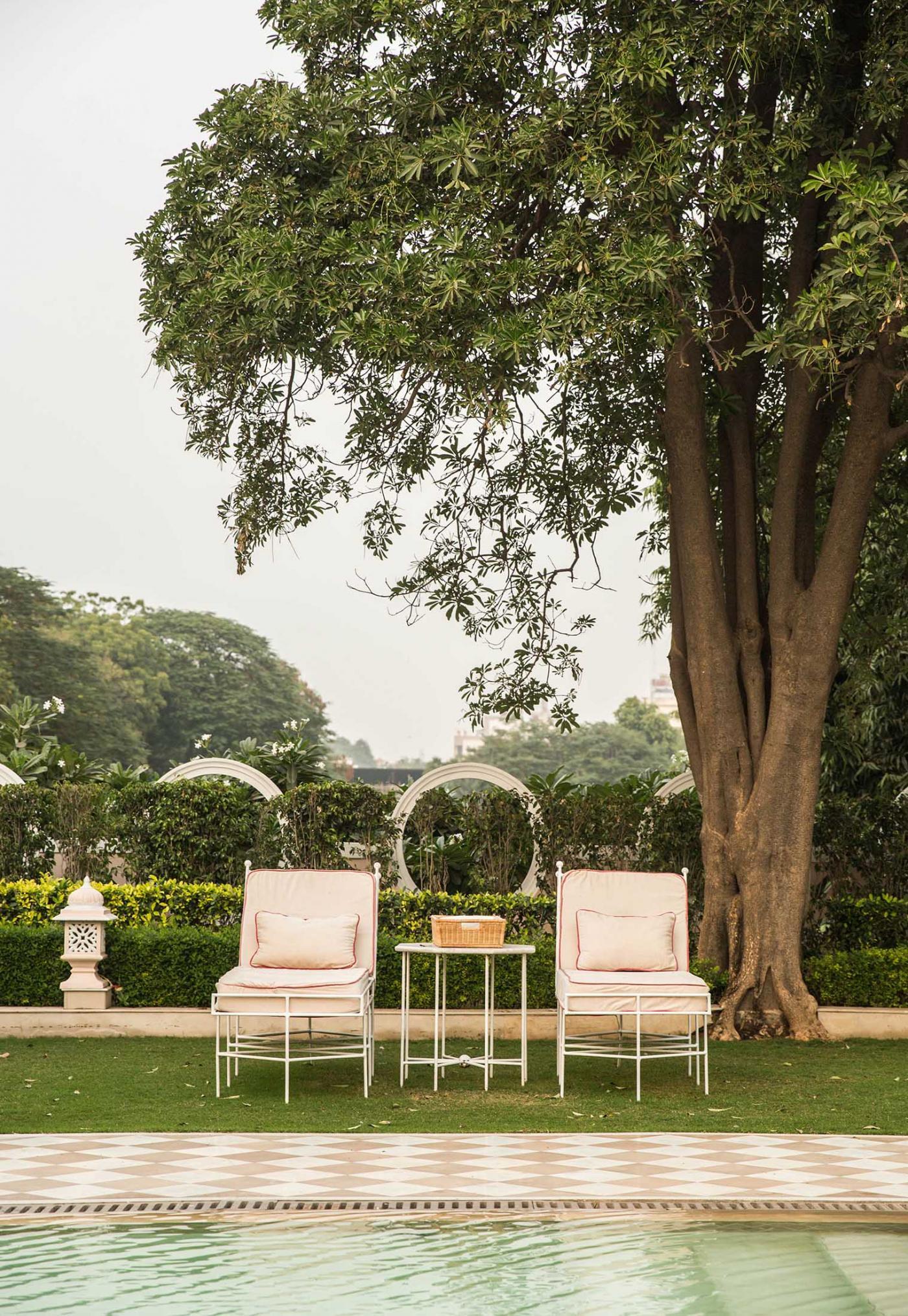 
Inspired by India? Check out​ The Restorative 15 Day Itinerary For Your Spiritual Journey Through India →

Solange’s Music Video Was Filmed At This Rad Architecture Spot

The 15 Coolest Pool Floats for Your Summer Shindigs