book venue space
unlock to view pricing
Send messages & view rates of your favorite venues in one spot.
magazine
History Lesson: How a 1970's A-Frame Transformed into the Most Beautiful Bohemian Beach House... Ever

Nothing good ever comes easy. It's a simple fact hard work pays off and without it, you miss that glorious sense of accomplishment oft copied but never really duplicated.  It takes a special person indeed to see potential in what others overlook.  The sparkling turquoise beauty you see below wasn't always as shiny and polished as it is now, at least not when Tiffany Caliva-Talledo a graphic and motion designer living in Ventura County, CA purchased it. She runs a small motion design company called FarmHand Studios and was looking for a diamond in the rough to renovate.

Her story of this beautiful, little beach house's discovery and subsequent transformation is an inspiration not only to us design & gathering gurus, but maybe it's a lovely lesson for all of us to dig a little deeper, look a little closer and take a second glance at something (or even someone?) we would normally pass right by.  As for it's current state, we'd say this beach house is picture-perfect for a bohemian beach bachelorette party, gorgeous girls getaway or sweet weekend escape. It's almost booked through 2016 so get to gathering! 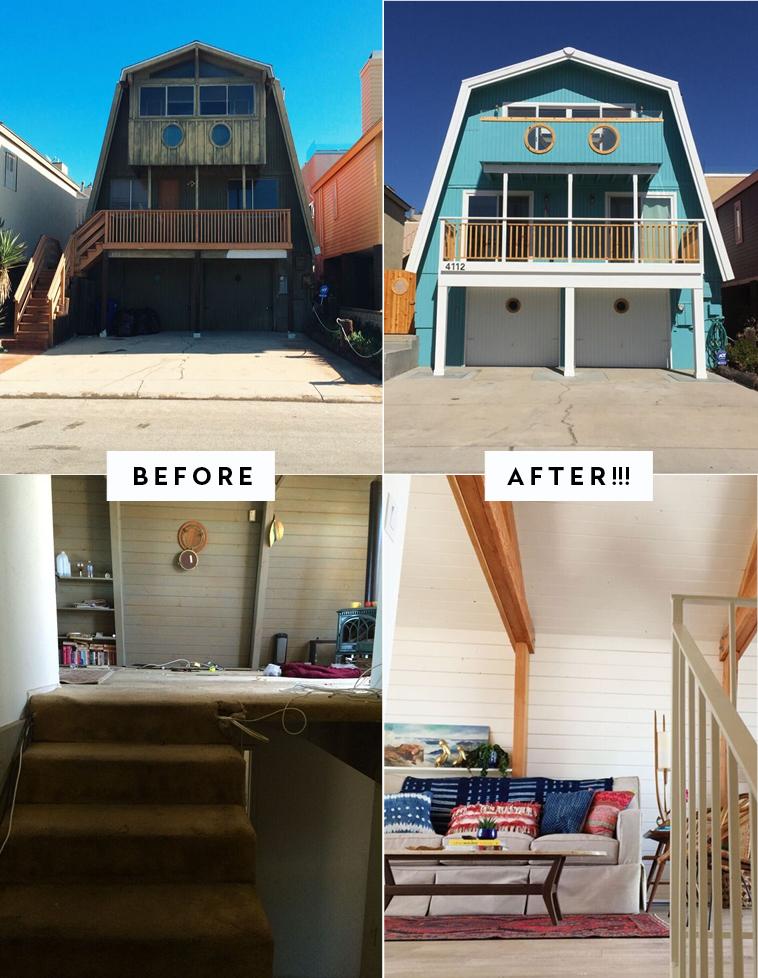 Hollywood By The Sea

The Beach Lodge is a 3 bedroom, 2 bath home located in Hollywood Beach, a mile long strip of white sand nestled between Malibu and Santa Barbara, California. In the 1920s, the desert-like landscape attracted motion picture productions, using the dunes to star alongside Rudolph Valentino and Douglas Fairbanks in movies such as “The Sheik” and “Bound in Morocco.” Legendary stars like Charlie Chaplin and Greta Garbo were drawn to vacation there, and Clark Gable and Rudolph Valentino even bought homes right on the sand. Soon, other Angelenos followed suit, and the area truly became Hollywood by the sea. Today, the community provides a private feel with easy access to the sand and very little foot traffic of non-locals.

From Eyesore to Extraordinary

The Beach Lodge is a 1971 modified a-frame house, built by a man with a love for ships, hence the upside-down boat design. It was the eyesore of the neighborhood, the house that everyone deemed a teardown. However dilapidated it looked in the pictures, we were drawn to “just checking it out” in person, if anything, just to support our friend (the listing agent). The house was so filthy and dark...just so completely abused throughout the years, but it had great bones. More importantly, it felt like it was meant for us.

So regardless of the fact that we weren’t even in the market for a house, there was no question about it, we had to have it!

The first step to bringing it back to life was addressing all the DIY problems it had accumulated, especially a couple of structural issues. After that, it was all about bringing in the light. The rooftop enclosure on the front balcony was torn off to better reveal unobstructed view of the Pacific Ocean and some of the Channel Islands. Sliding glass doors were installed throughout the house to let in all the natural light, ocean breeze, and sound of the waves. 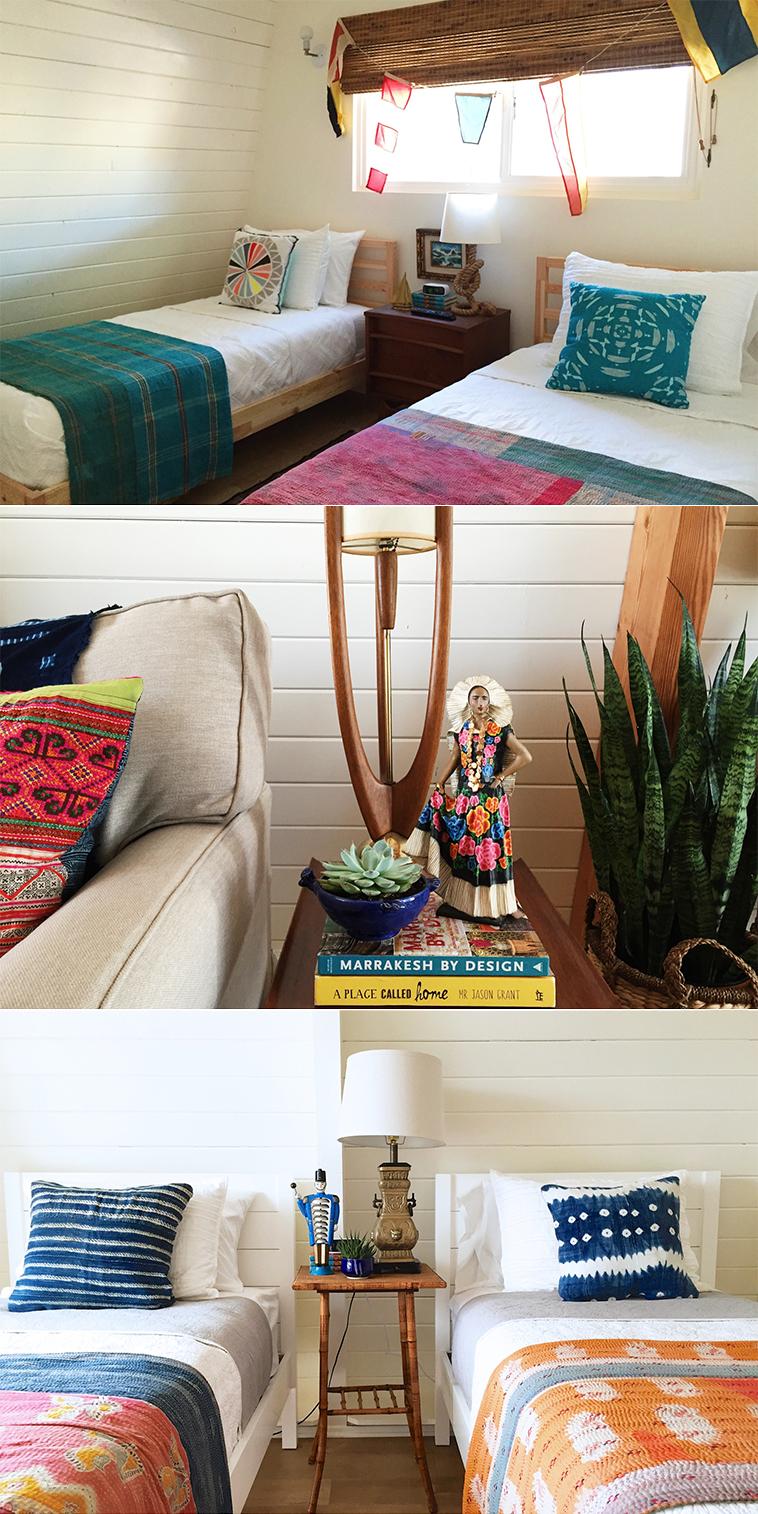 The entire house, however, was painted a sickly green that sucked up any light that came in. It was such a contradiction of the location of the house being steps away from the beach. So, I decided to paint all the interior wood in a semigloss white, to allow for the light to reflect on the surfaces and capture as much brightness as possible. The beams on the upper floor were so amazing but unnoticed by most people, so they were stripped down and given a clear finish to allow them to stand out against all the white surfaces.

Unstained finishes of different wood varieties continued to be the complimentary touches to the all white ceiling and walls. Lines and details were kept simple to allow for the surface textures to really come through and to most of all, not compete with the ocean view and the unique structure of the house. 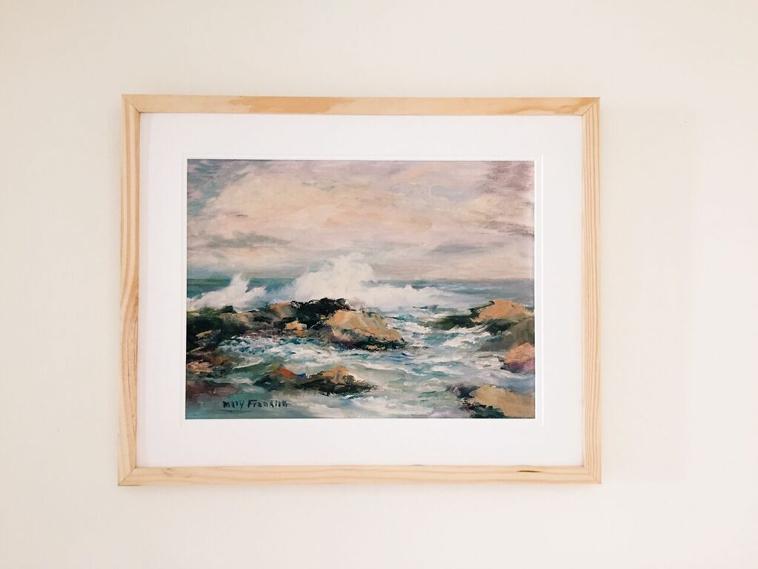 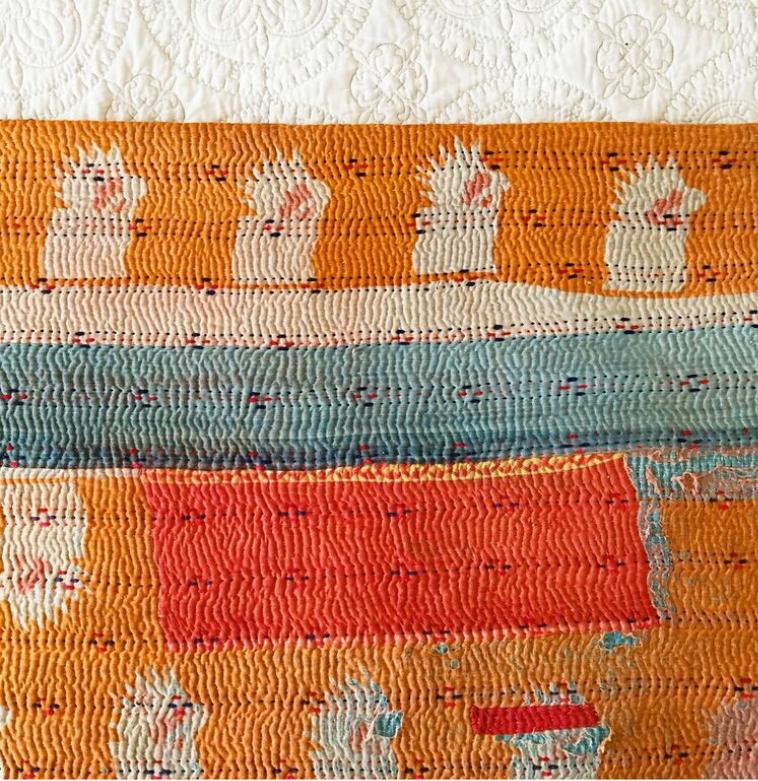 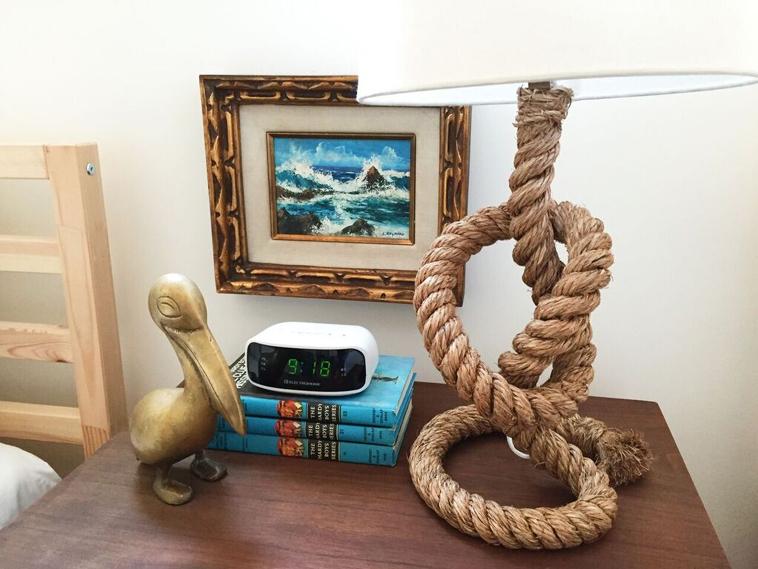 I originally considered going with an all white beach-y look, but my love of color wouldn’t allow for it. Luckily, the white walls ended up being the perfect backdrop for the touches of color I brought in. I didn’t want the house to get too theme-y/kitschy, so small nautical decorative touches were carefully curated. As far as a design style, I’ve always been drawn to the colors and textures of more global, eclectic pieces like kantha quilts, but at the same time, have always loved the clean and beautiful lines of mid century pieces. The obvious decision thus, was to mix the two styles and hope for a happy accident to take place.

Many of the furnishings, as well as decorative accessories, are vintage and were purchased from flea markets and antique stores in the LA and Ventura county. We wanted these to add history to the house and a sense of comfort to the home. The items that are new provide modern amenities and share the simple, clean aesthetics found in mid century designs and were bought at stores like West Elm, Crate and Barrel, Ikea, and online stores specializing in modern designs. 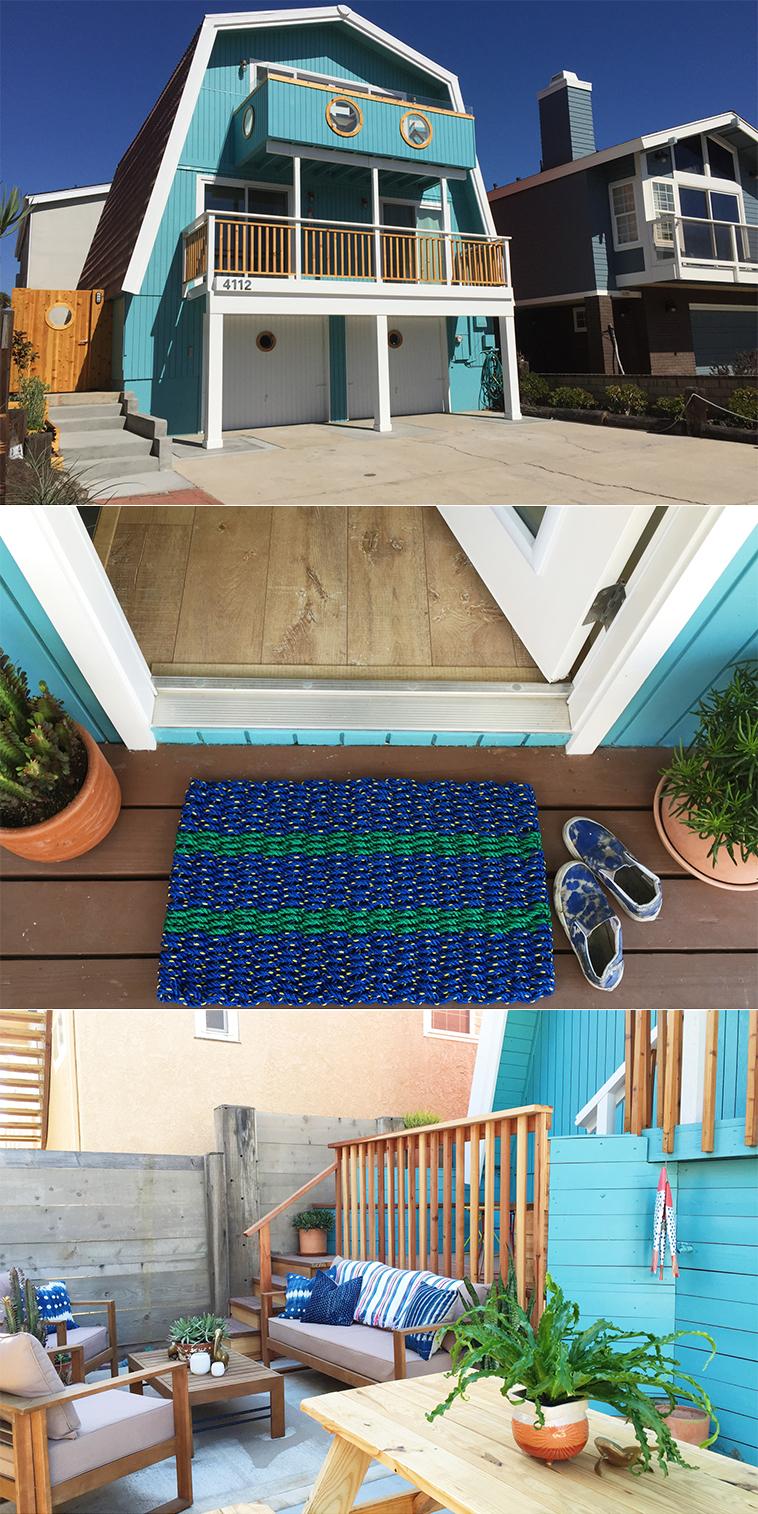 The Beach Lodge is now fully transformed, getting the “Hollywood Celebrity” attention from people passing by. From the outside, the cool blue exterior paint creates an immediate welcoming effect to incoming guests. We created multiple areas outdoors for people to sit and relax, either to enjoy moments of solitude or the company of friends and family.

Inside, we created rooms that we hope feel equally inviting, where you feel instantly at ease and lose all sense of time. The open floor plan of the living area of the house is conducive to social gatherings, and ups the ante with ocean and island views from all areas of the space. 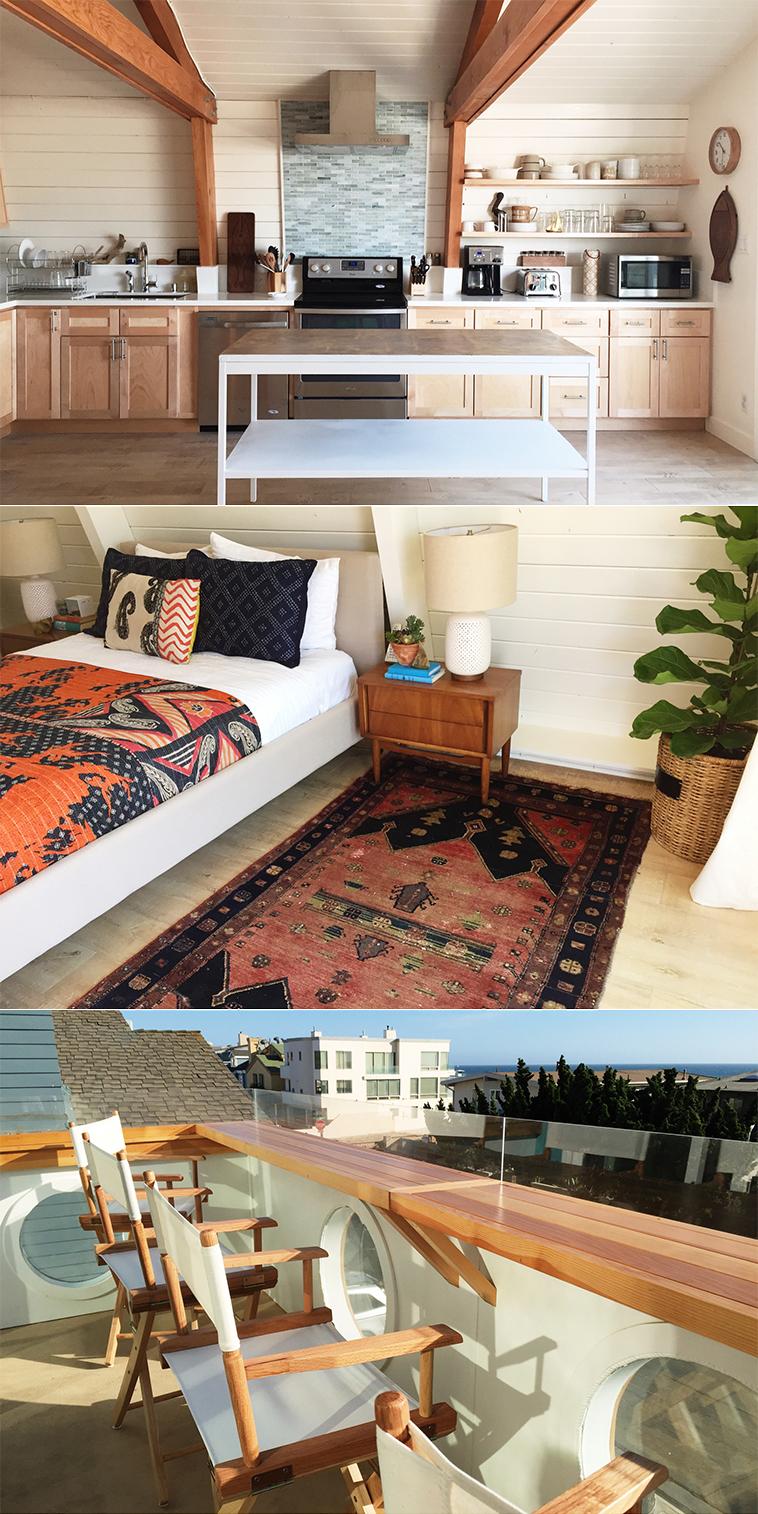 The upstairs also has 2 large balconies on the front and back of the house to add more living space. The sleeping quarters are designed for relaxation, with the 2 (of the total 3) front facing bedrooms providing peek-a-boo water views from their shared balcony, and the ocean breeze lulling you to a peaceful state of mind.

Wherever you are throughout the house though, whether it be indoors or out, the sound of the waves is unwavering in the background...a constant reminder that there’s no agenda here other than to just relax and enjoy the surroundings.

Originally, the main goal for The Beach Lodge was to create a home where our kids could go for a day without missing their phones and electronics. We wanted to give them the kind of childhood that we grew up with, where outdoor activities like riding our bikes and skateboarding ruled our day; when playing board games and hanging out with the family weren’t thought of as torture. 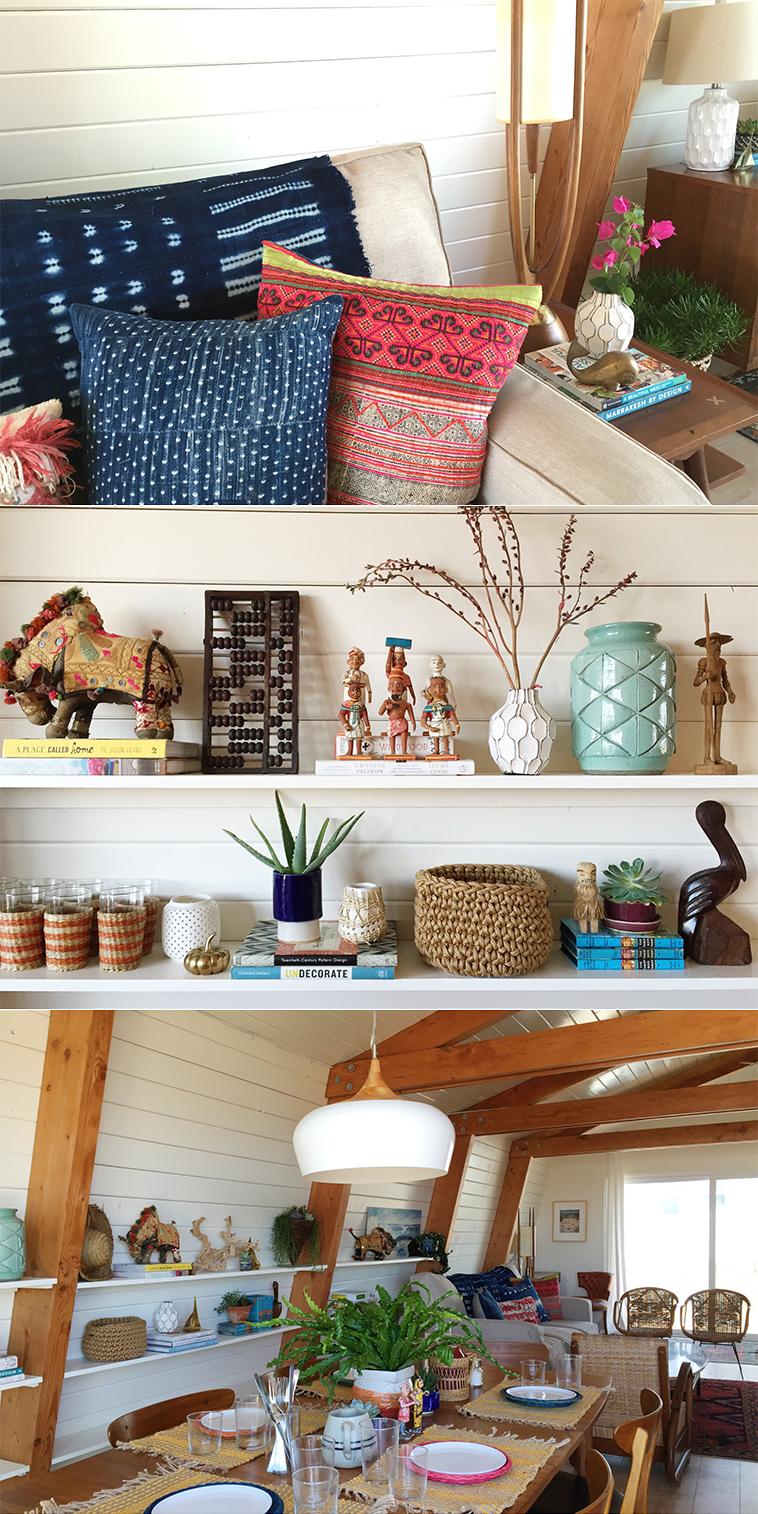 Not only did we accomplish that goal for ourselves, but for our guests as well. The Beach Lodge has proven to not only be great for family get-togethers, but also perfect for small birthday gatherings, reunions with friends, and even photo shoots that want a relaxed beach-y or bohemian vibe. 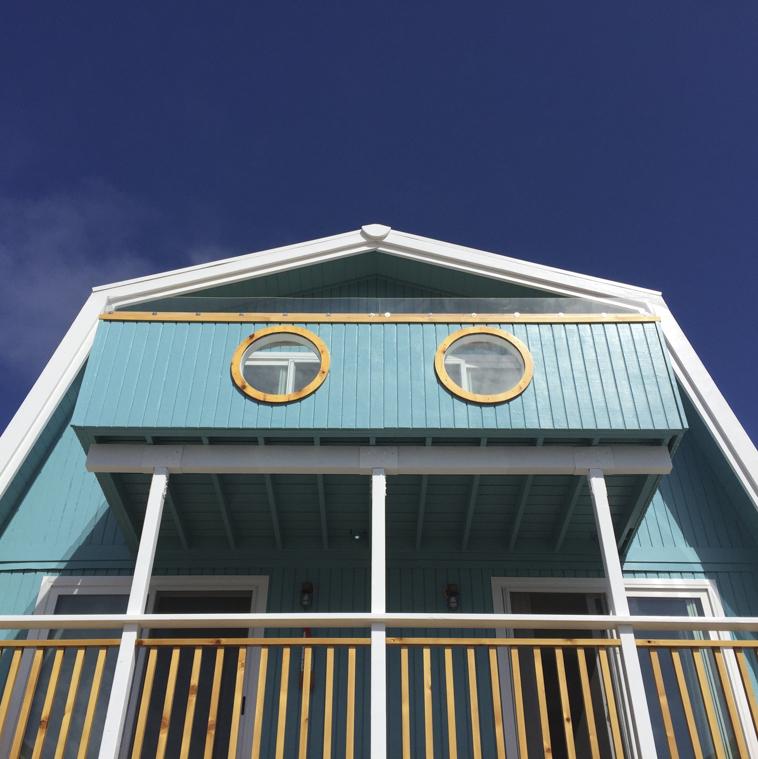 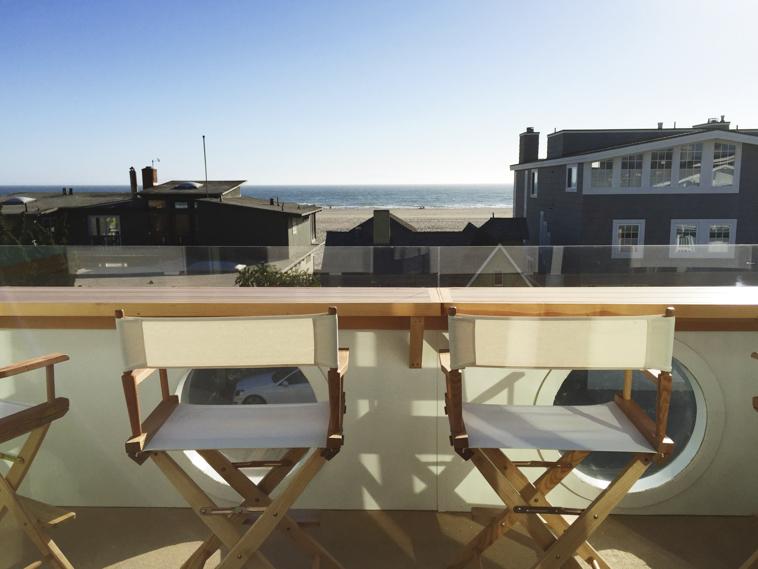 Basically, The Beach Lodge fits any event that calls for a place to gather together and spend a memorable day by the ocean. BOOK HERE!