Many (maybe countless) things come to mind when you think of New York City, but the beach is probably not one of them. Well, that’s about to change. Coming in 2022 – we know, sounds far off but hey, 2020 is in four months – Manhattan will have its first beach. That’s right, a sandy, waterfront stretch of land on the Gansevoort Peninsula. We’re not saying the water will exactly be swimmable, but lounging, picnicking, beach volleyball, and long sunset walks are all highly suggested.

The beach may be the star of the show, but it’s actually just one part of the soon-to-be 5.5 acre addition to the Hudson River Park that will also be home to green spaces and urban park areas. Currently, the Hudson River Park has more than 550 acres of waterfront land and estuarine sanctuary on Manhattan’s west side.

Beyond getting a new lease on life, the peninsula also claims some of the best views Manhattan has to offer. Essentially, it will be free to the public with unobstructed city sights. Sign. Us. Up. Construction is set to begin in 2020 and until it officially starts to take form, we’ll be imagining the warm weather possibilities of this prime piece of real estate in the Meatpacking District. 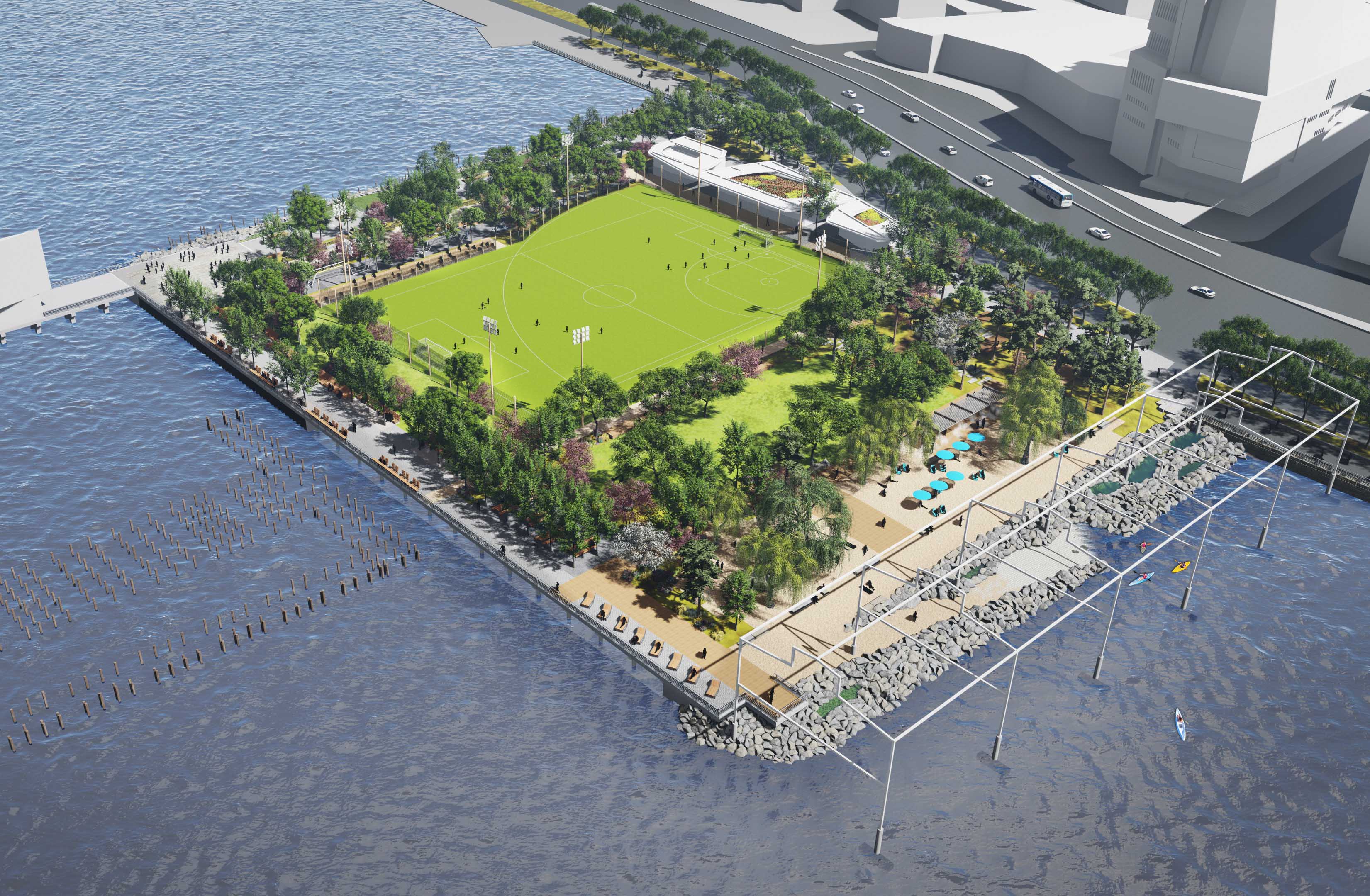 This new sweep of Hudson River Park will live on the Gansevoort Peninsula – the last remaining block of Thirteenth Street. The once bustling street ran all the way to 23rd and later served as a parking lot for NYC’s Sanitation Department. The peninsula was cleared out in 2018 in preparation for this project. The land is especially valuable because it sits on solid ground as opposed to a pier like much of the surrounding river-front property, meaning it’s the perfect place to plant some green for future generations. 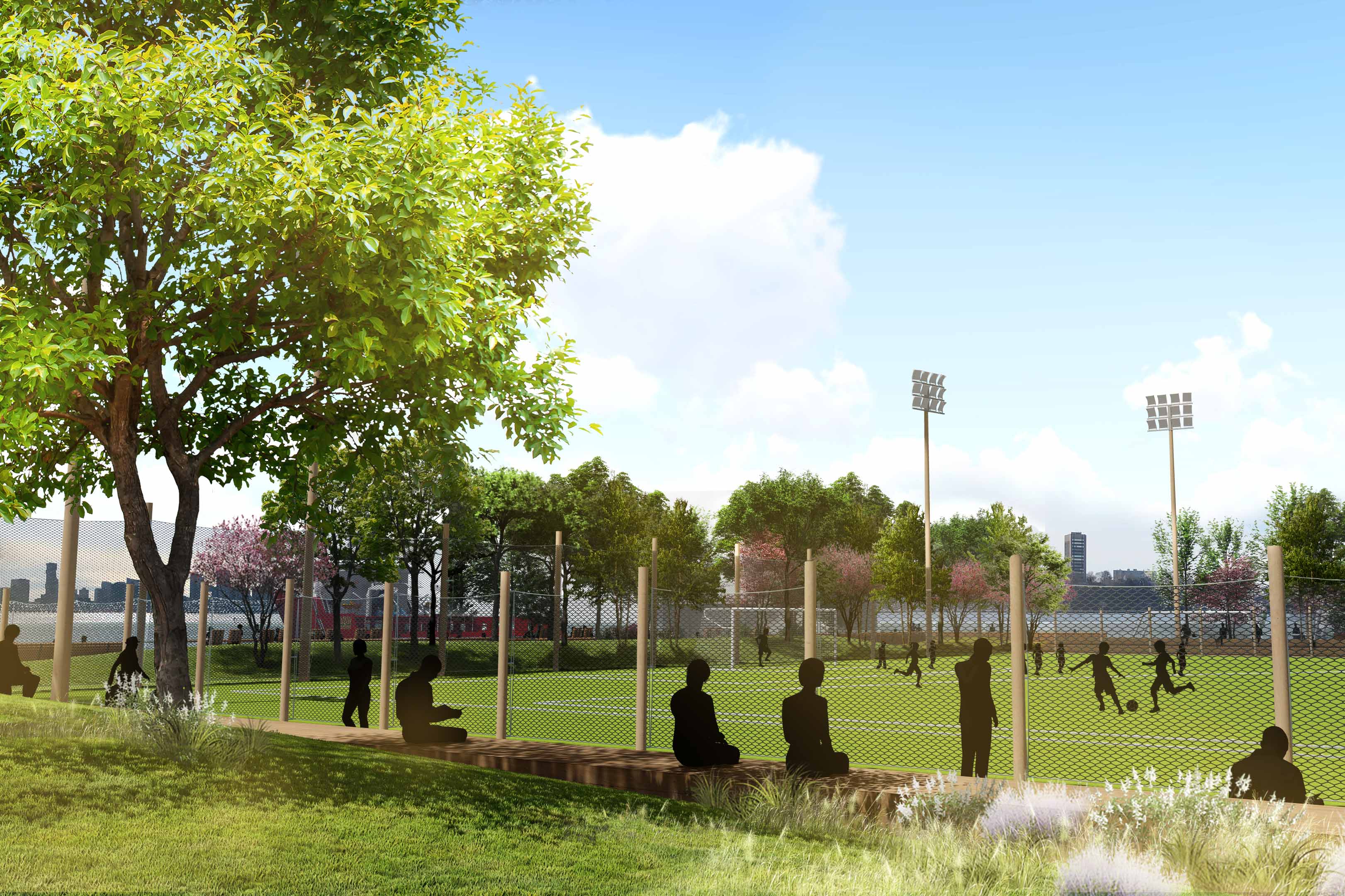 The Hudson River Park Trust elected James Corner Field Operations, a design, planning, and architecture firm, to lead the project – you may know them for their work on Domino Park and the High Line, so you know it’s going to be good. Curious about their (very detailed) plans? You can view them here.

Beyond the beach and abundant green space, the park will be home to a public art installation called “Day’s End,” a homage to Gordon Matta-Clark’s 1975 artwork on the peninsula that was ultimately destroyed in 1979. According to Hudson River Park Trust President & CEO Madelyn Wils, “We think Day’s End is an inspiring idea that celebrates the history of the Hudson River waterfront.” The art installation will be donated by the Whitney Museum of American Art. 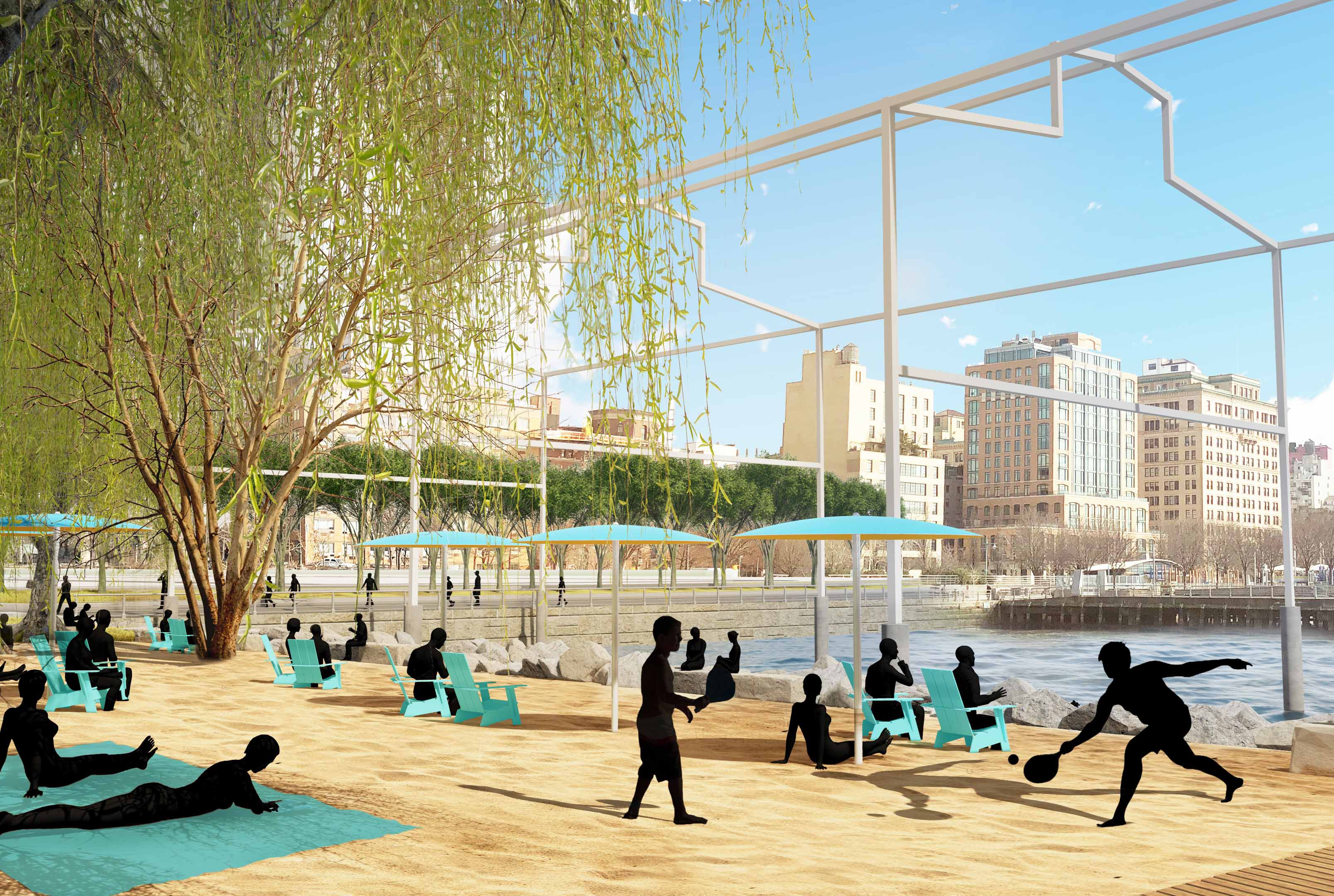 A pillar of James Corner Field Operations plan is to enhance this already vibrant neighborhood in Meatpacking District. They have been working alongside locals and surveying residents to make sure everyone’s interests are represented in the park. Just outside of the former parking lot lies a wealth of shopping, dining, and nightlife as well as the aforementioned Whitney Museum that sits just across the street from the future public space. 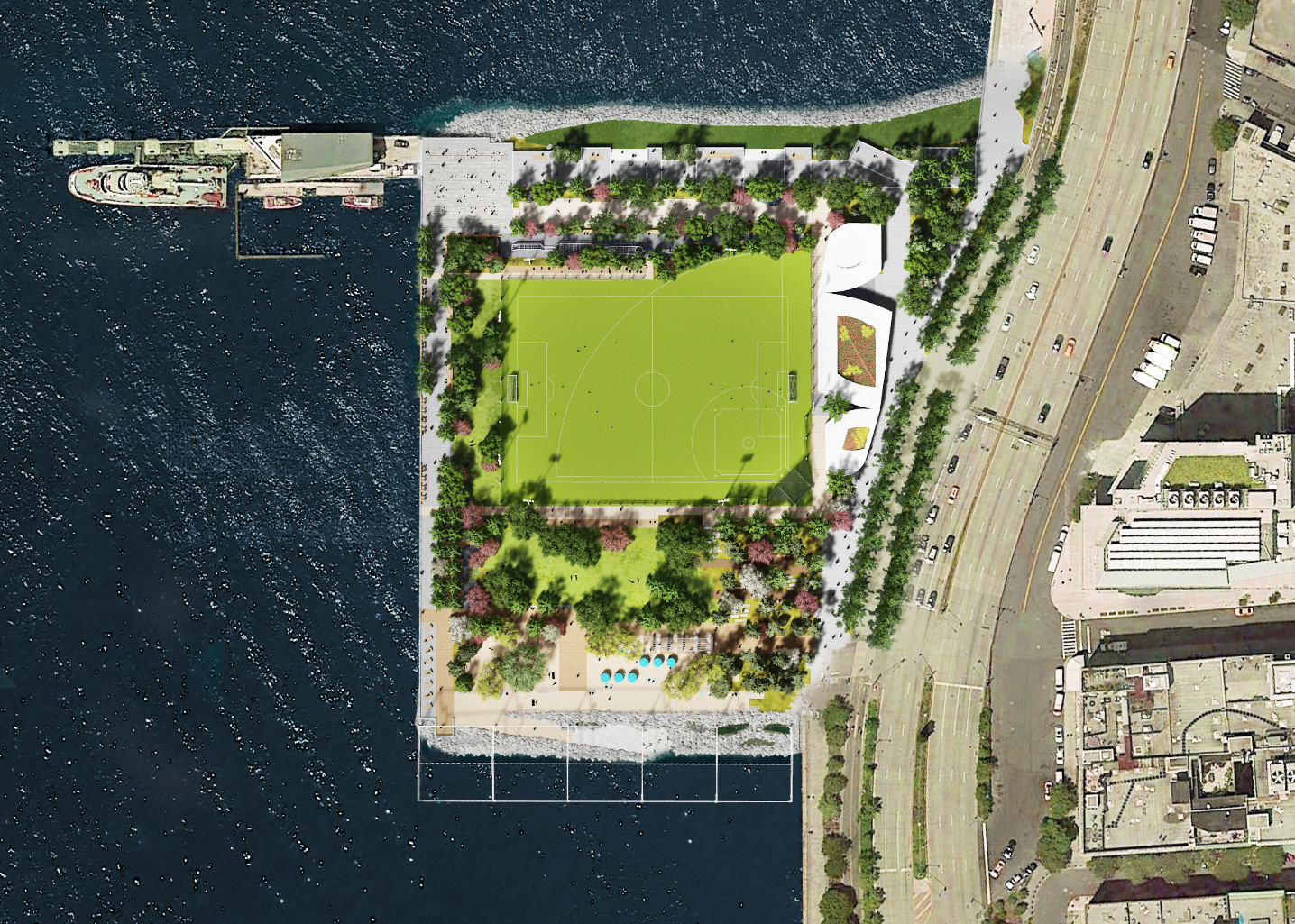 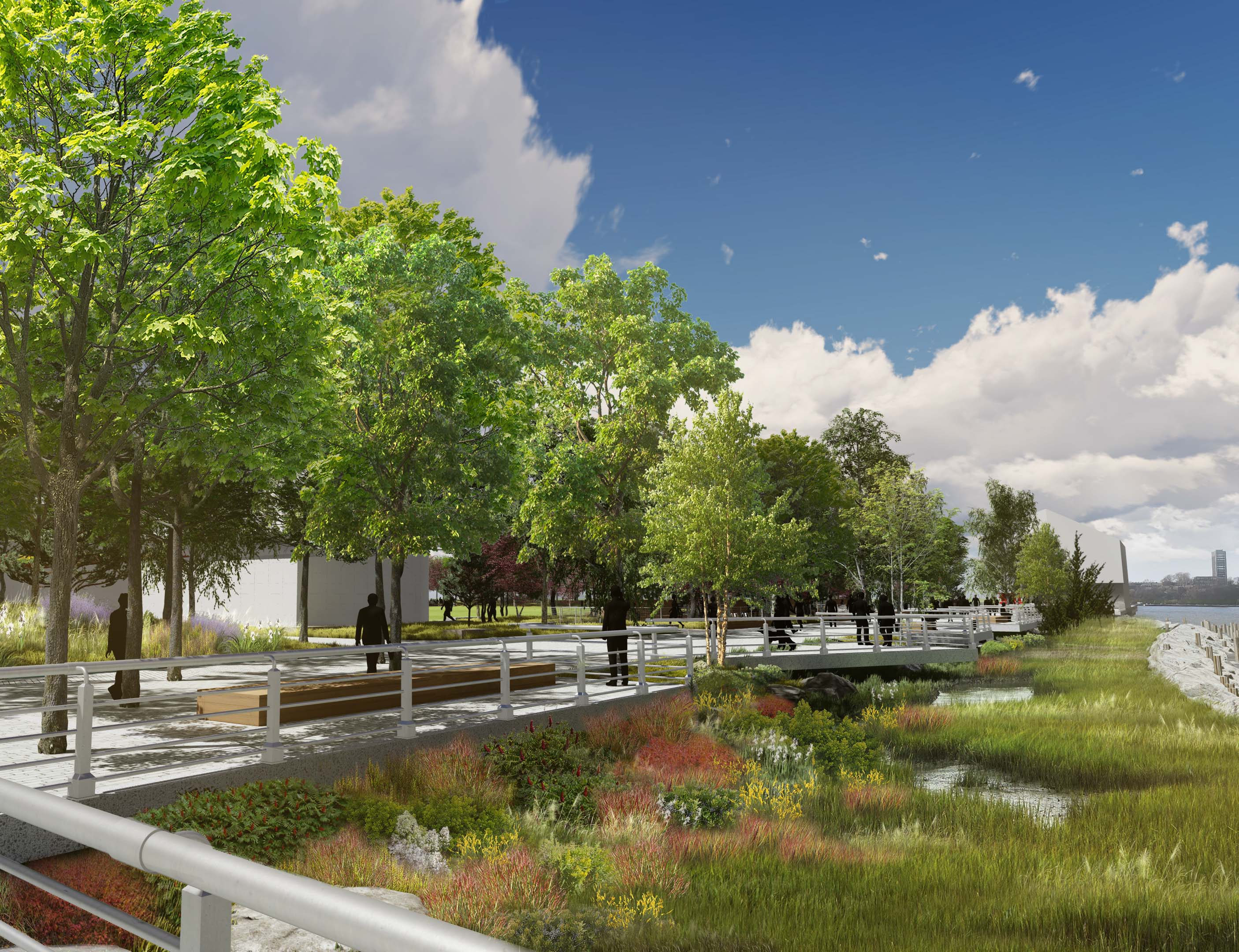 Head to Mykonos' Hottest Hotel for Your Next Birthday Bash

How to Build the Perfect Charcuterie Board

This Scottsdale Spa Let's You Create Your Own Aromatherapy Experience

A Blindfold, A Shaman, And A Beautiful Couple Are The Recipe For This Gorgeous Guatemalan Wedding