magazine | Travel | Trending Topics
May The 4th Be With You: Everything You Need To Know About George Lucas's Museum Of Narrative Art

After months of trying to get Lucas's master plans for his Narrative Art Museum approved in San Francisco (Treasure Island) and Chicago, the team decided to relocate and revise their plans to fit the requirements of Exposition Park in Los Angeles, California. Just South of USC and neighboring the Los Angeles Memorial Coliseum. The exhibition is reported to be the most architecturally innovative structure the park has seen to date with designs from no other than Chinese architect, Ma Yansong. Yansong is known for founding, MAD Architects and was the mastermind behind the eclectically modern Absolute Towers, The Ordos Museum, Harbin Opera House, Conrad Hotel and the Sheraton Huzhou Hot Spring Resort, just to name a few.

The current blueprints resemble exactly what you would imagine from George Lucas, a futuristic space-ship. However, these renderings are unlike the Star Wars fighters we've seen in his Academy Award winning movies. Taking over two parking lots on Vermont Avenue, the permanent installation will not just be a Star Wars gallery full of R2D2 robot replicas. Lucas envisions the museum to house Hollywood memorabilia as well as figurative art by Norman Rockwell and many more. 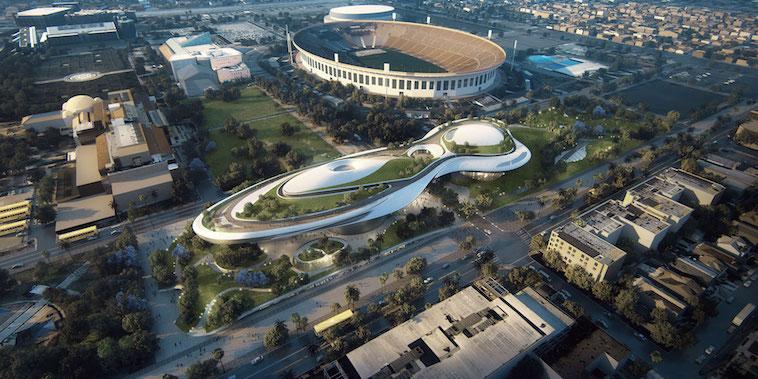 5 Things You Need To Know About the Lucas Museum of Narrative Art:

- It is scheduled to open in 2021.
- With Yansong inspiration primarily drawn from nature, this museum will be floating above the park and will also house multiple areas to lounge on the grass on the roof of the museum.
- The museum’s website says to think about the collection in three themes: The history of narrative art, the art of cinema, and digital art.
- Yes, the design of the Millennium Falcon will be featured along side artists and Hollywood cinema such as: The 20,000 Leagues Under the Sea (1954), Zaha Hadid Madrid’s Civil Courts of Justice, David Hockney’s The Arrival of Spring in Woldgate and more.
- Is it actually a bigger deal then we all think? YES! Think of how many people will be drawn to the LA area due to this major tribute to not only the Star Wars brand but fans will also have another stop to cross off their list. Disney's Star Wars World is scheduled to open 2019.

Fall into Flavor: Why You Must Order a Winter in Monaco at This Camp Inspired Restaurant

Why Your Next Group Outing Should Include Stunts