book venue space
unlock to view pricing
Send messages & view rates of your favorite venues in one spot.
magazine | Gatherings | Dinner Parties
We Drove 560 Miles and Threw a Dinner Party Under the Stars

“Everyone, it’s time,” rang out as twenty of us, some strangers and some friends, chose our desired pillow or pouf to sit on at a table in the middle of the desert. Dressed in tones of the earth, we paused, placed our glasses down and took in the golden hour happening around us. As the sun set, murmurs of “This is absolutely magical,” and “I’ve never seen anything like this,” went around while charcuterie and wine was passed down the massive table scattered with flickering candles, clay vessels filled with foraged branches, and simple yet beautiful place settings.

Here, the twenty of us sat in an ancient desert surrounded by old friends and new ones for the opening of the newest glamping experience by Under Canvas while sharing a meal lovingly provided our hosts. The majority of us traveled from the beach towns of San Diego to the majestic land of the Grand Canyon and thanks to the creative eye of Pow Wow Design Studio, we were gathering around a beautiful mirage of a table.

Melissa of Pow Wow Design Studio loaded up her airstream trailer with rugs, pillows, poufs, butterfly chairs, candles, pottery, serve ware and glass ware to haul up to the Grand Canyon for our gathering under the stars. Allowing the natural surroundings to do most of the talking, Melissa pulled an inspired collection filled with whites, neutrals, texture and warmth to compliment the brush and red dirt of the camp.

To fill the clay vessels adorning the table, we opted against cut flowers and instead chose to use fallen branches and tumbleweeds from the surrounding environment. Inside tip: be careful to not destroy or hurt the environment by only foraging plants that have already fallen off or detached from the ground.

As the group sat in preparation of the feast ahead of us, the table looked as if it had been there all along, effortlessly blending in to the land. We remained in awe as the sun slipped away and the candles illuminated the magical, twinkling scene under the stars. 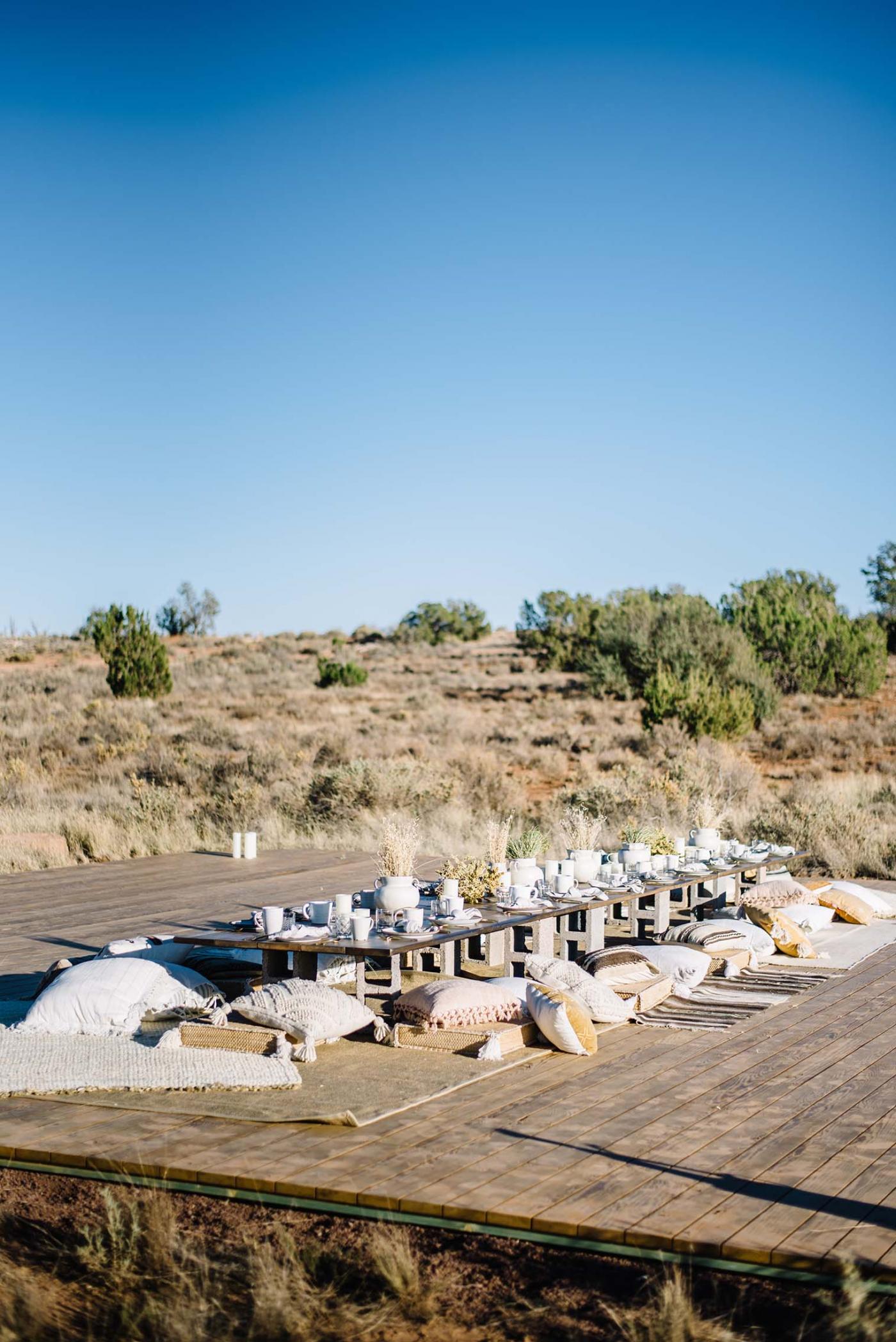 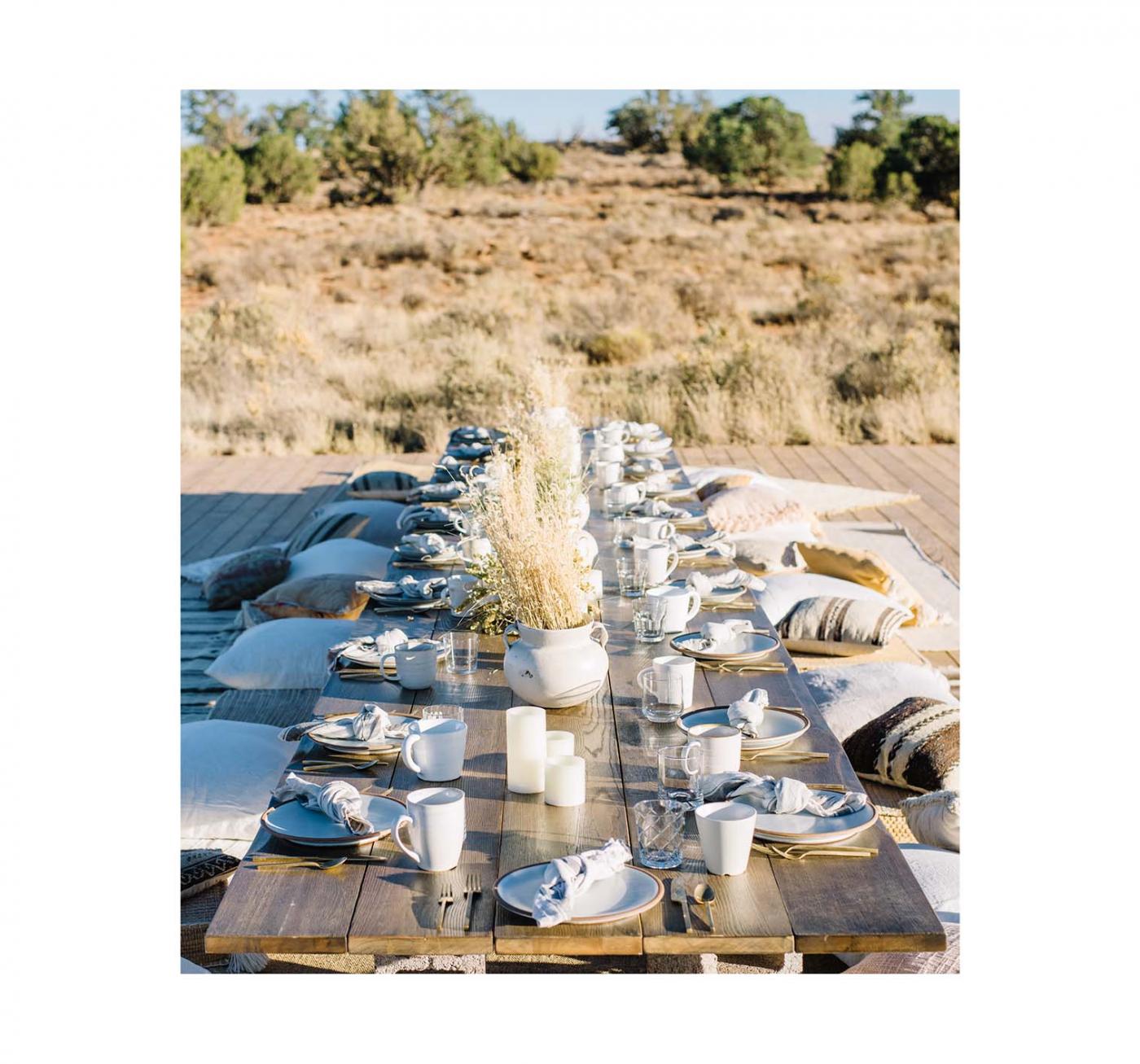 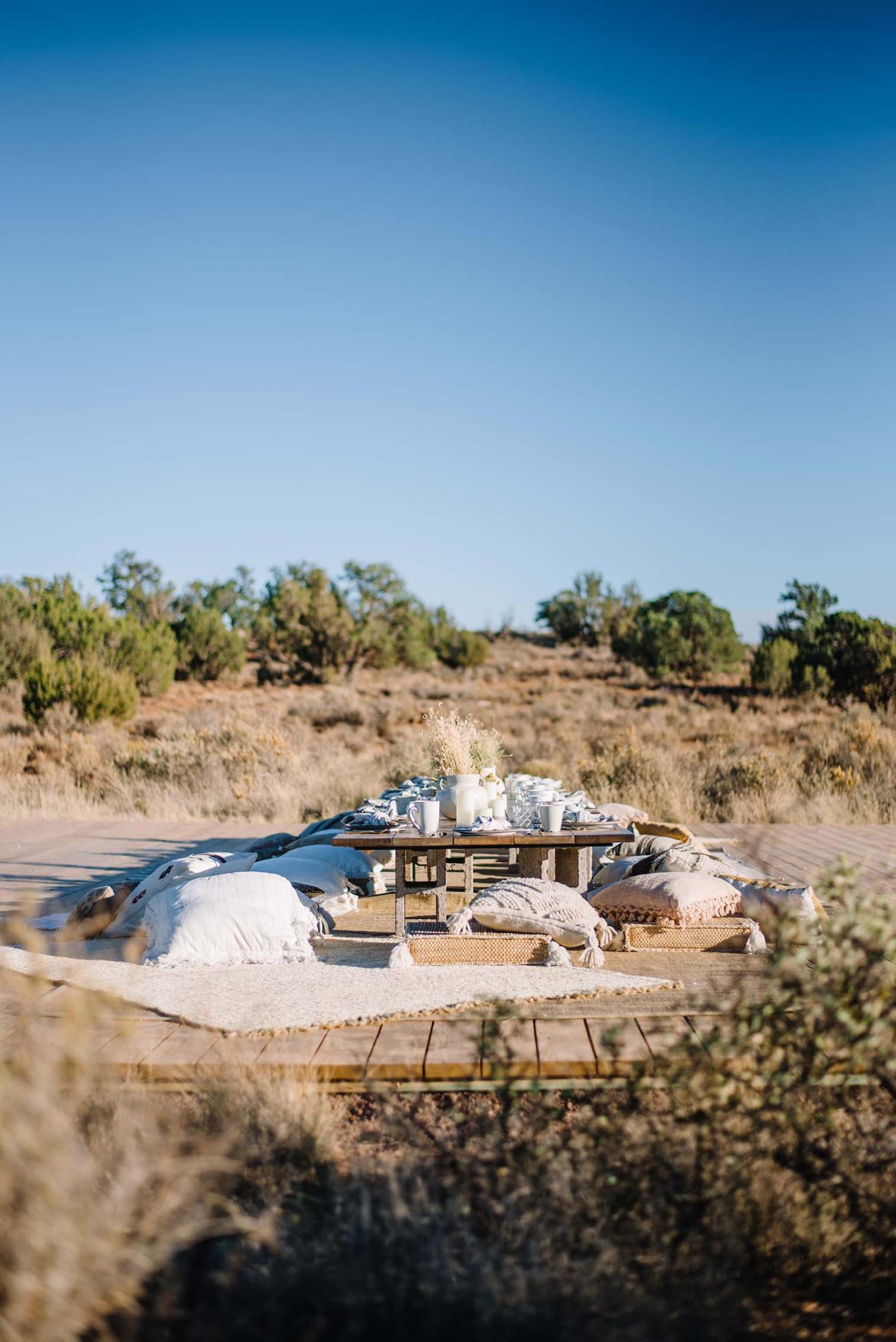 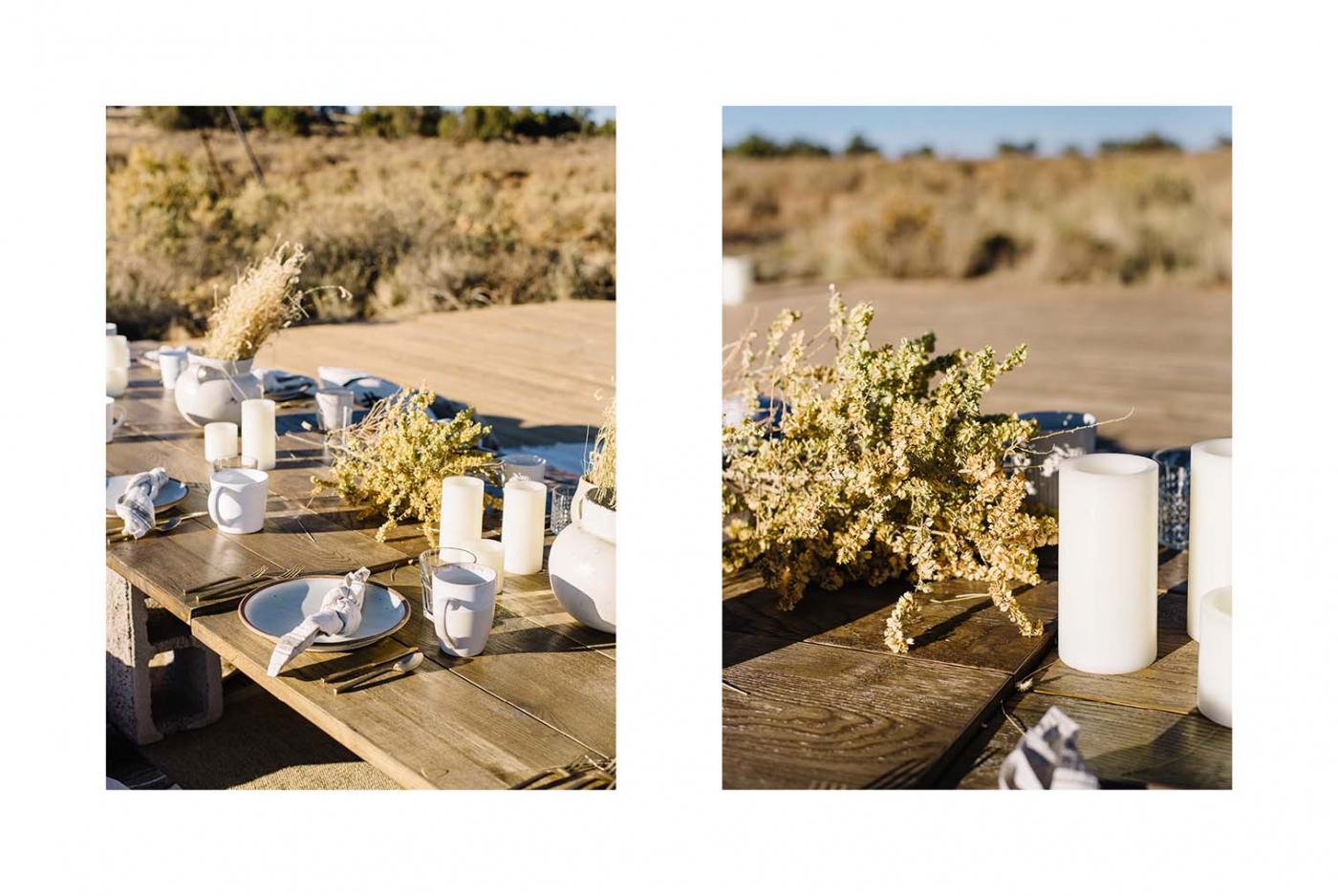 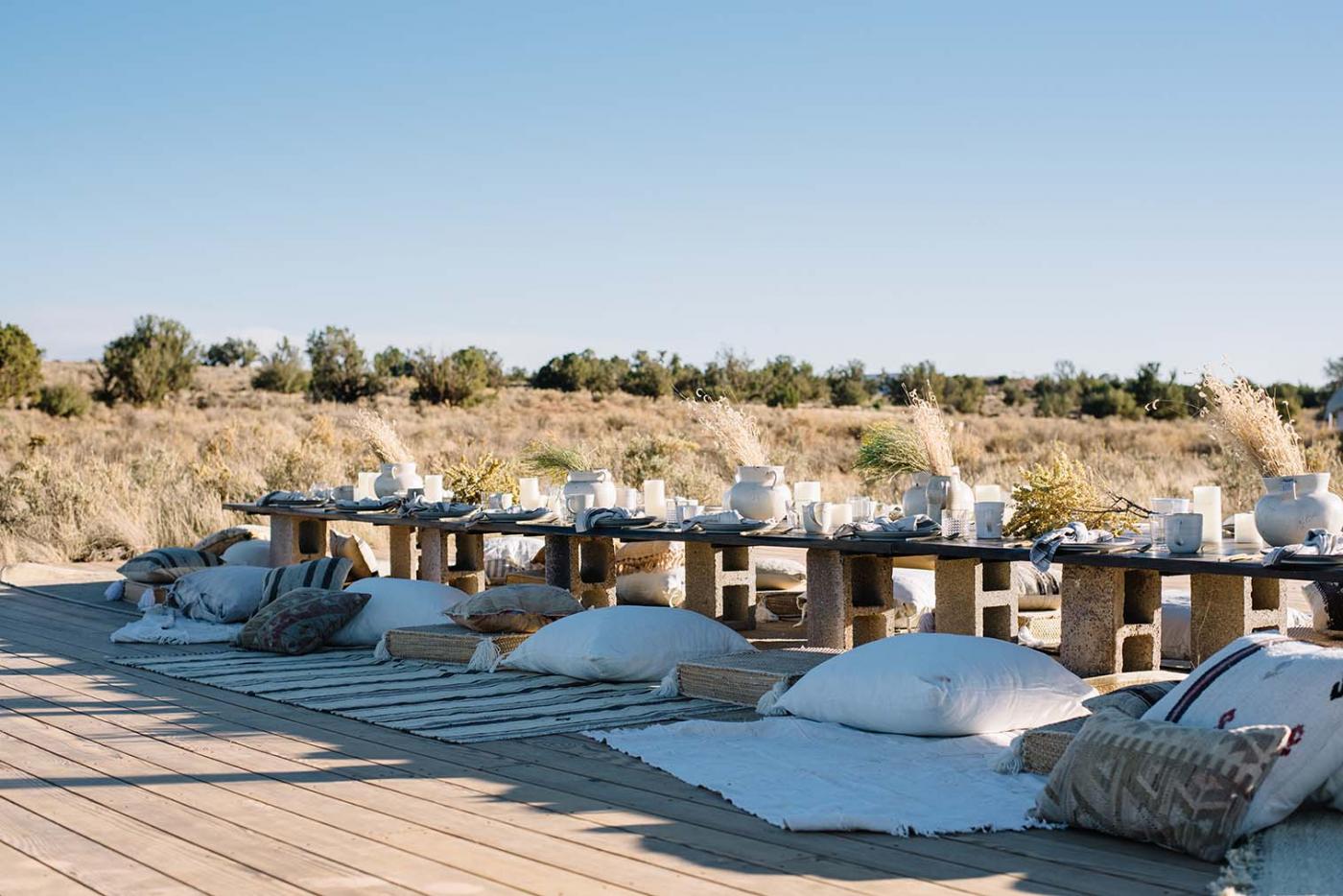 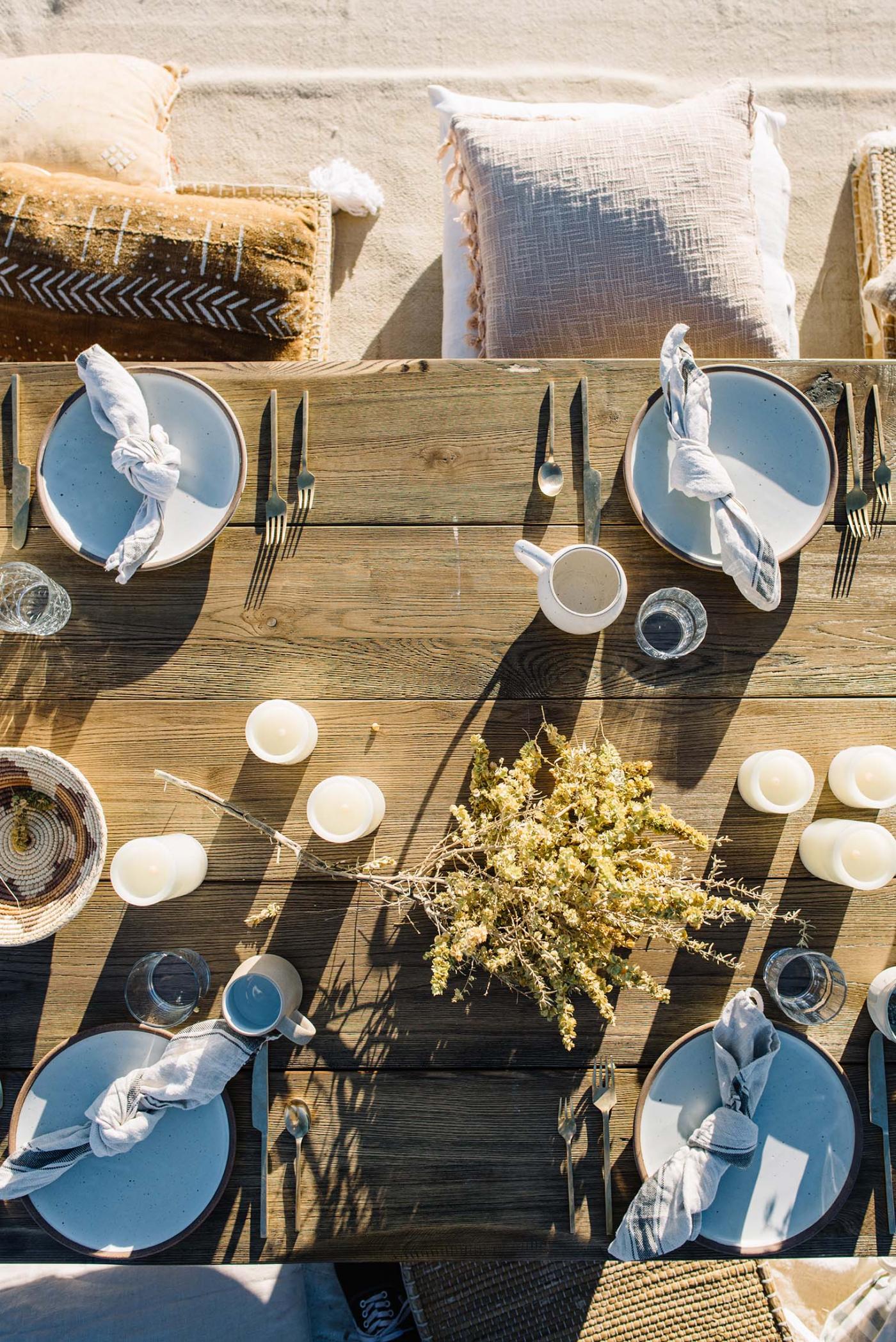 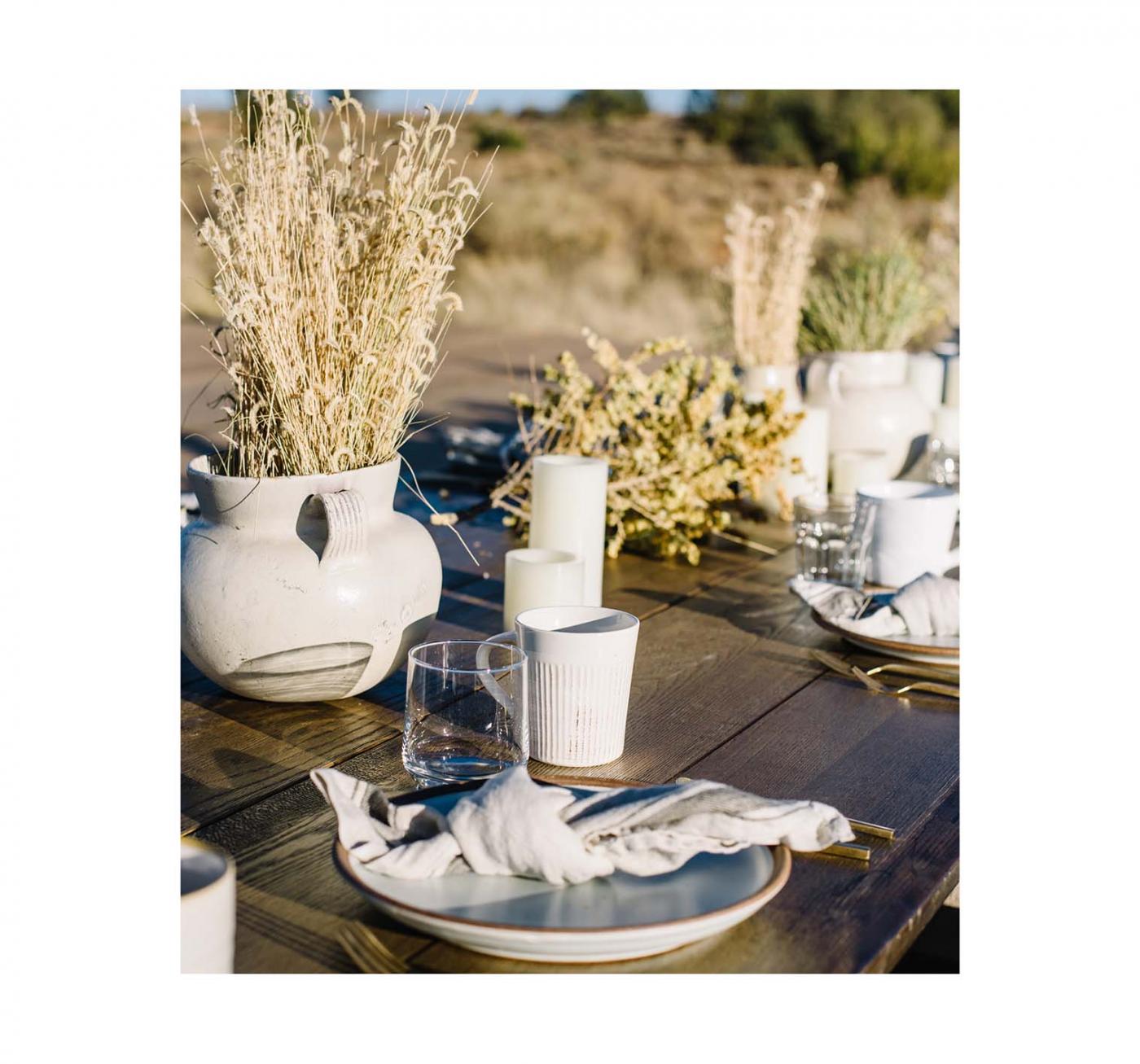 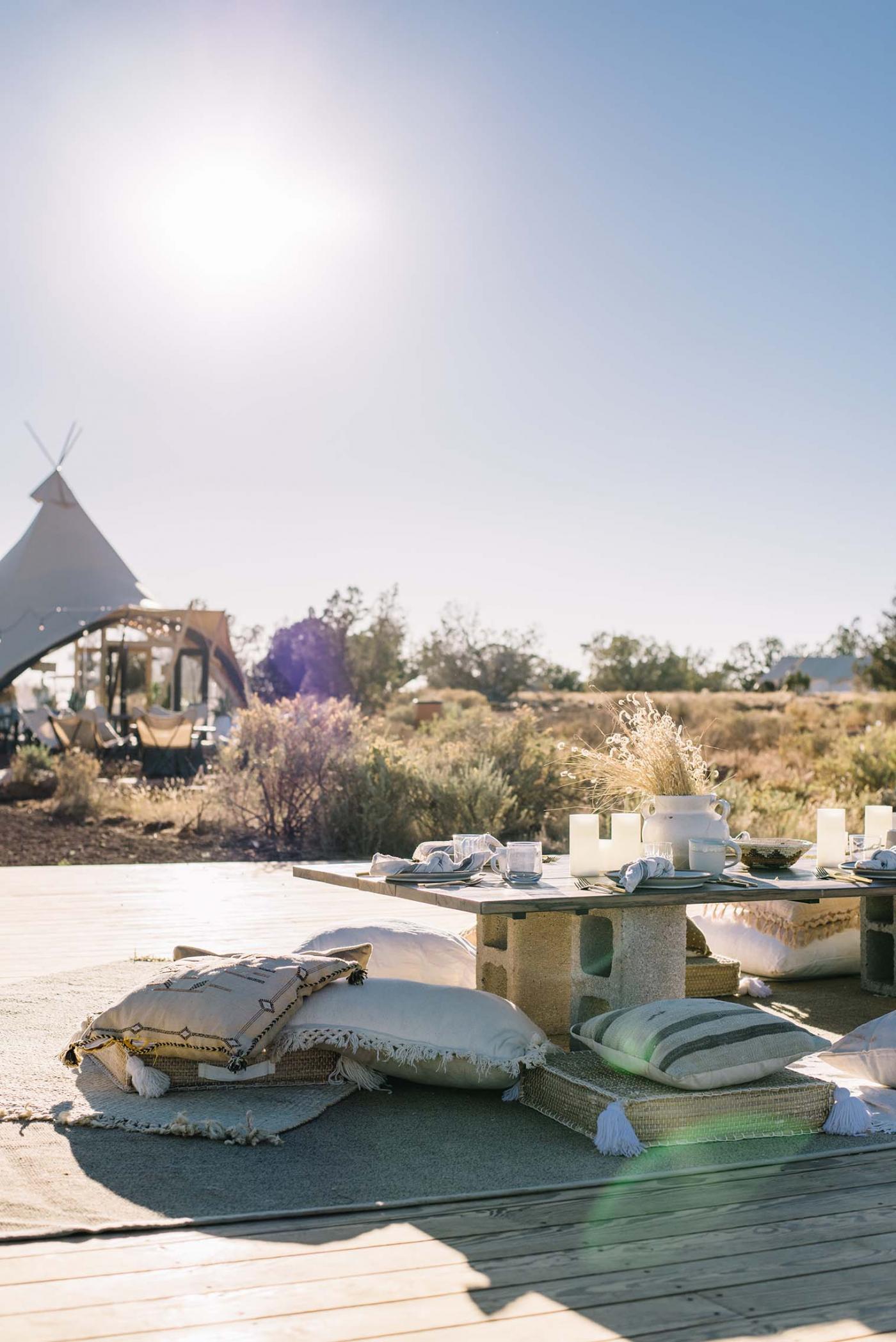 The meal was truly a collaborative effort and the perfect introduction to melding the entire group together. The Venue Report and Mint Studio teams crafted a charcuterie board composed of meats, cheeses and seasonal vegetables from the local market (everyone’s favorite: the honey chevre). While initial drinks were poured, the board made its way down the table for everyone to nibble on. Every dinner guest contributed their favorite spirit and wine to create quite the communal cornucopia of beverages: clean crafted wine, bourbon, organic hard kombucha by Juneshine and tequila. The Under Canvas team graciously created a fall seasonal salad along with family style fajitas of either chicken, steak or veggies. Everyone’s efforts brought the group together, fostered conversations and allowed for plenty of mingling. 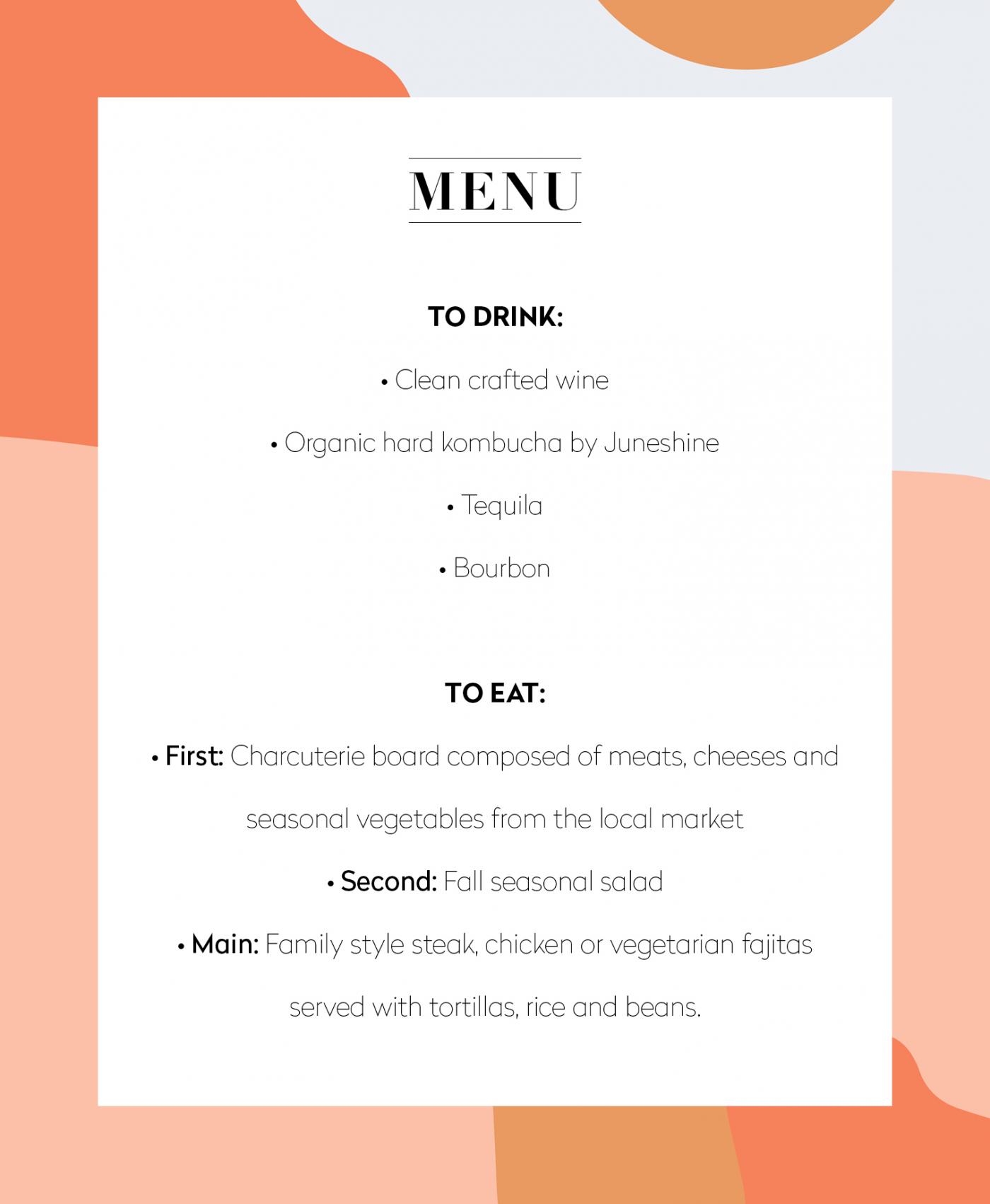 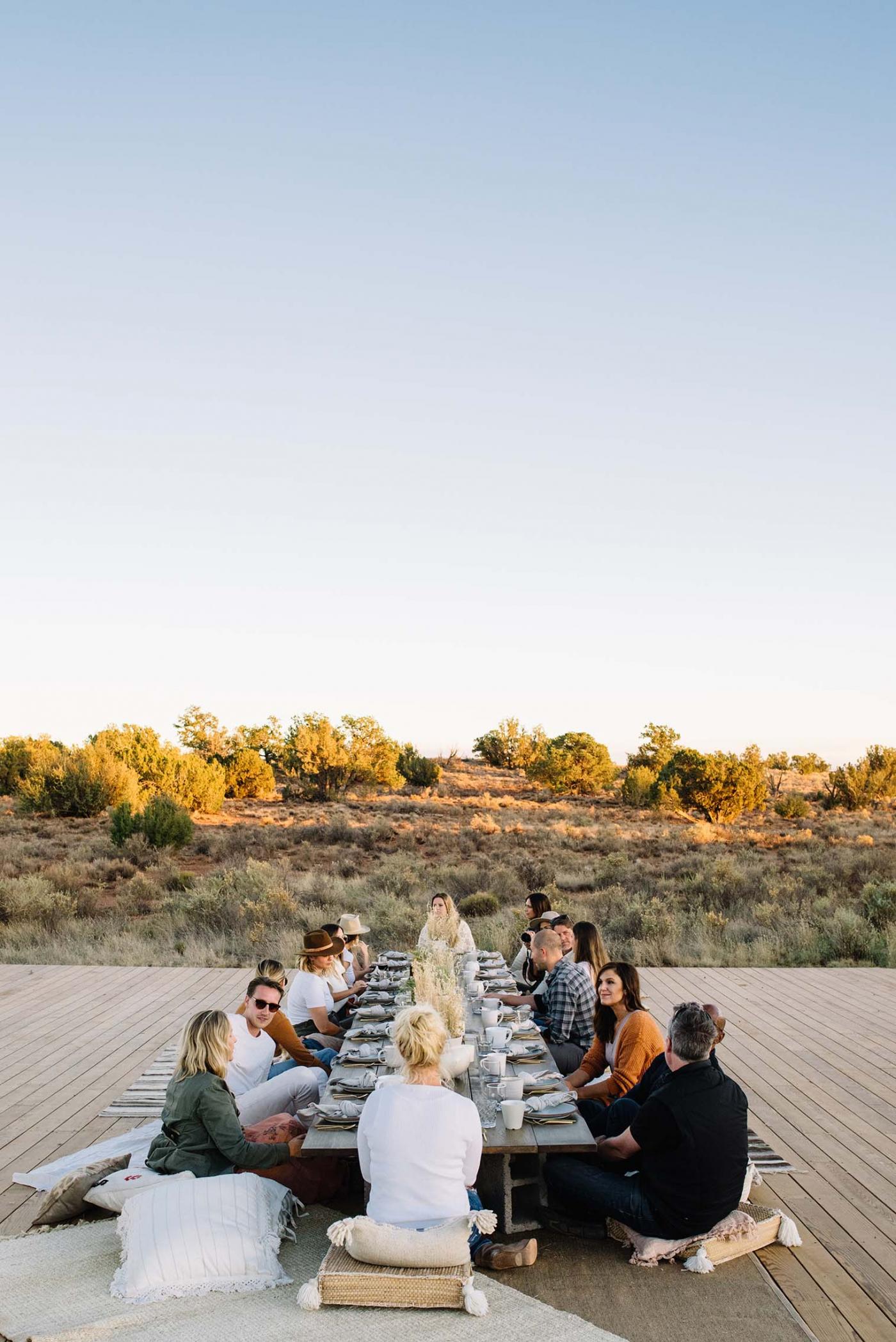 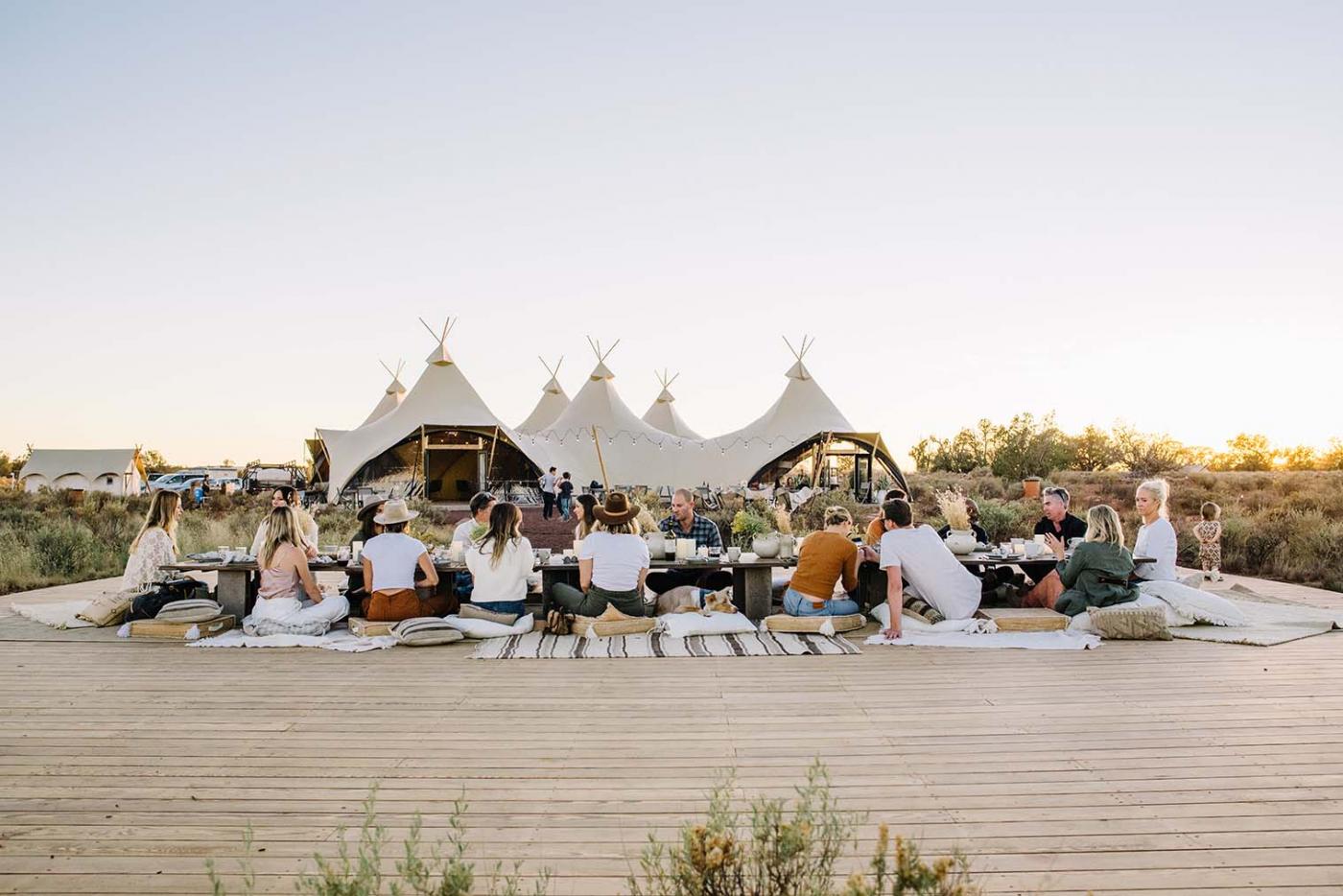 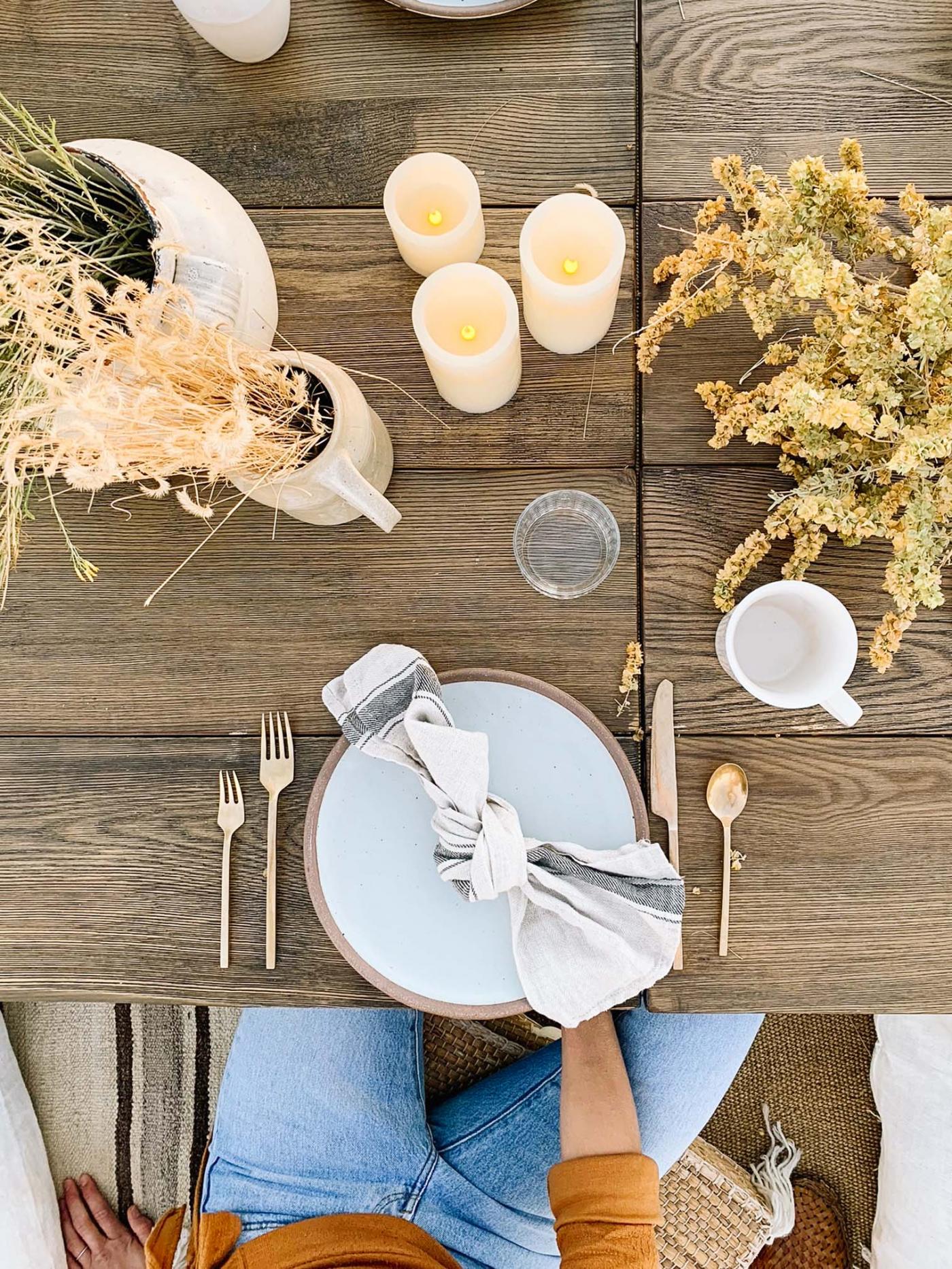 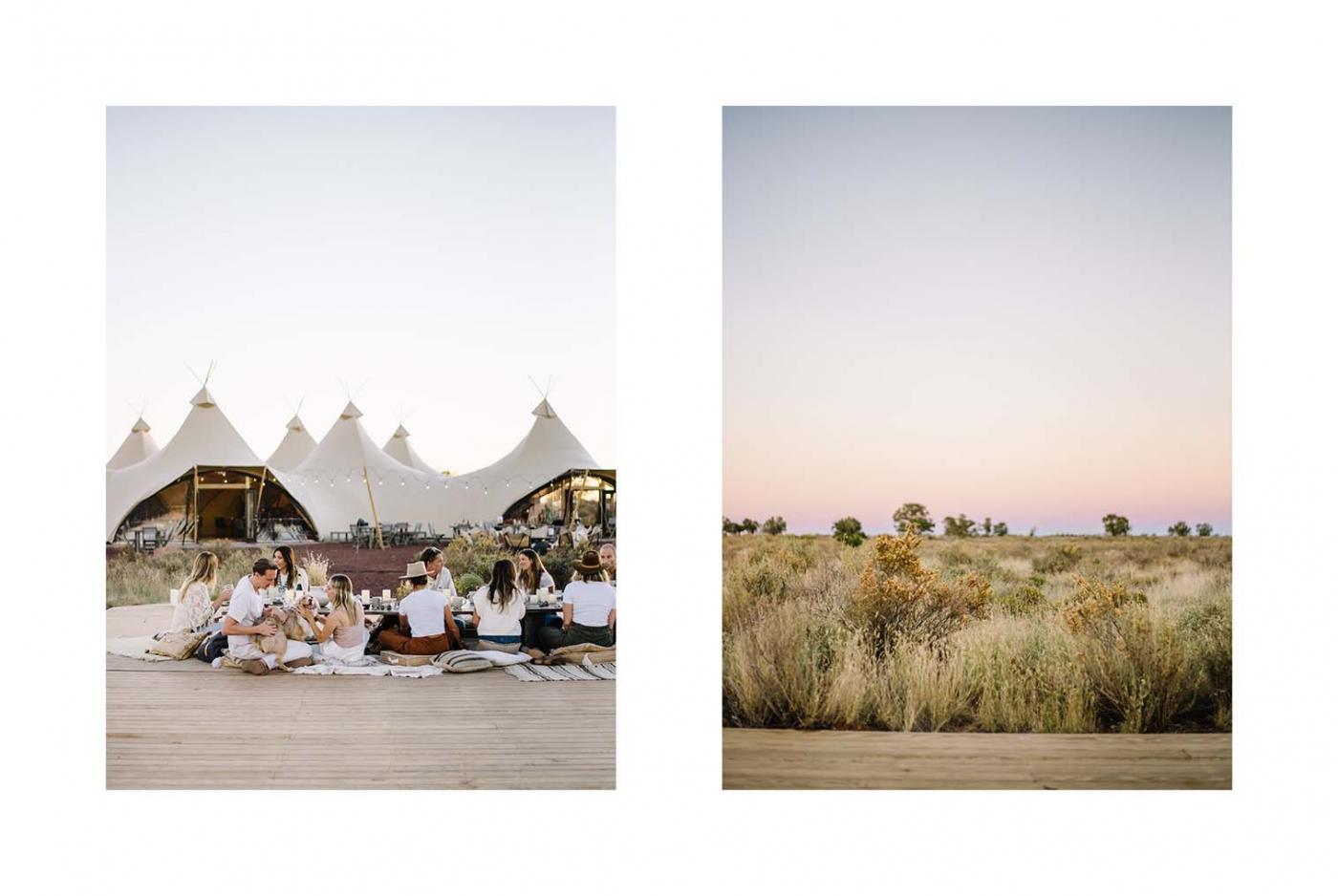 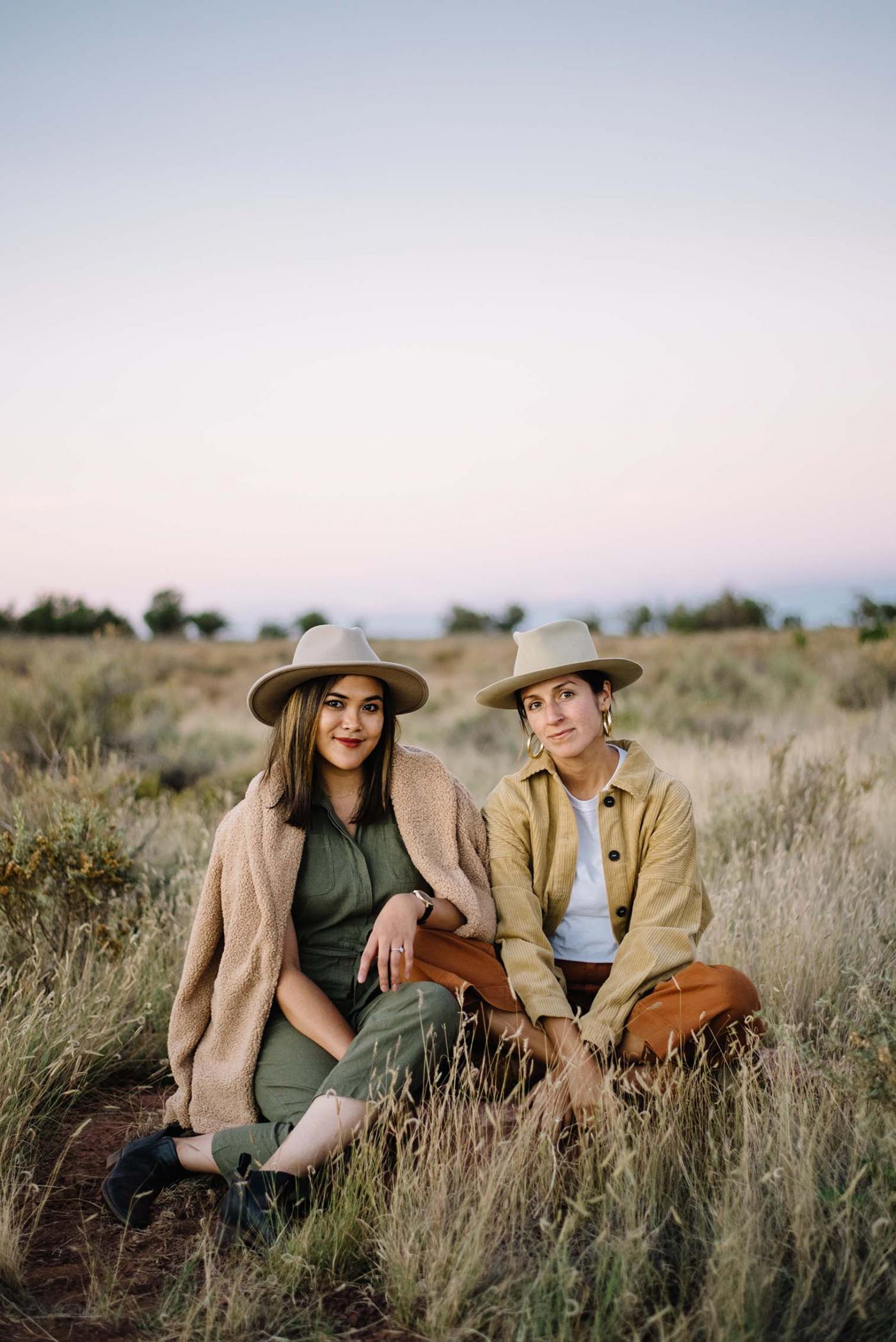 As we sat, noshed and drank amongst the beauty surrounding us, we noted that this gathering was special for several reasons. First, the Grand Canyon has existed for millions of years and we were quite literally breaking bread on sacred ground – the connection to the earth was not only palpable but humbling. Next, a group of strangers met in the desert to create shared experiences with the common goal of respecting and immersing ourselves in nature. Lastly, we were creating many “firsts” at Under Canvas Grand Canyon from the first dinner party to the first aerial yoga show to the first group of people gathering to create memories. It was also a time of firsts for many attendees who had not experienced the Grand Canyon before. 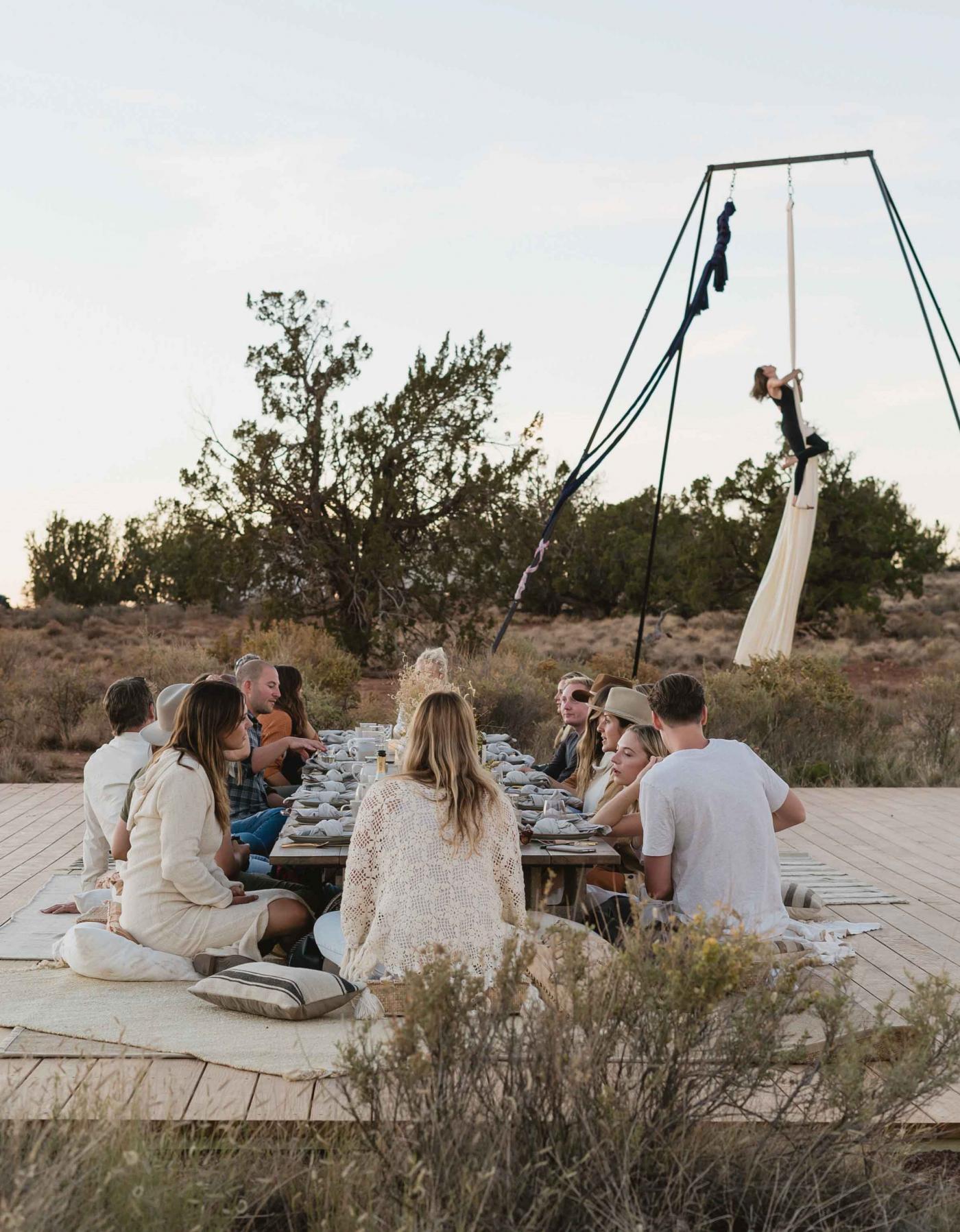 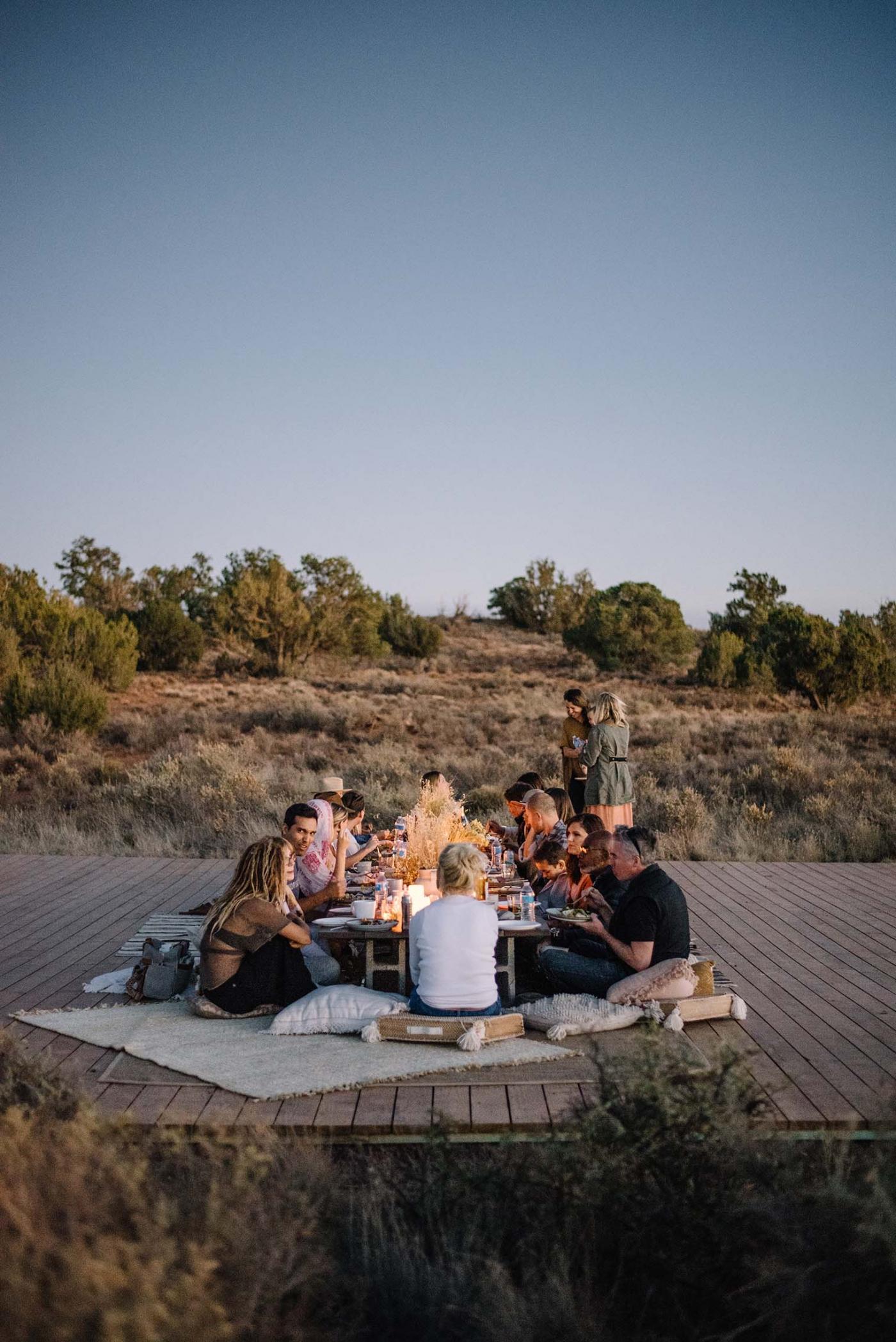 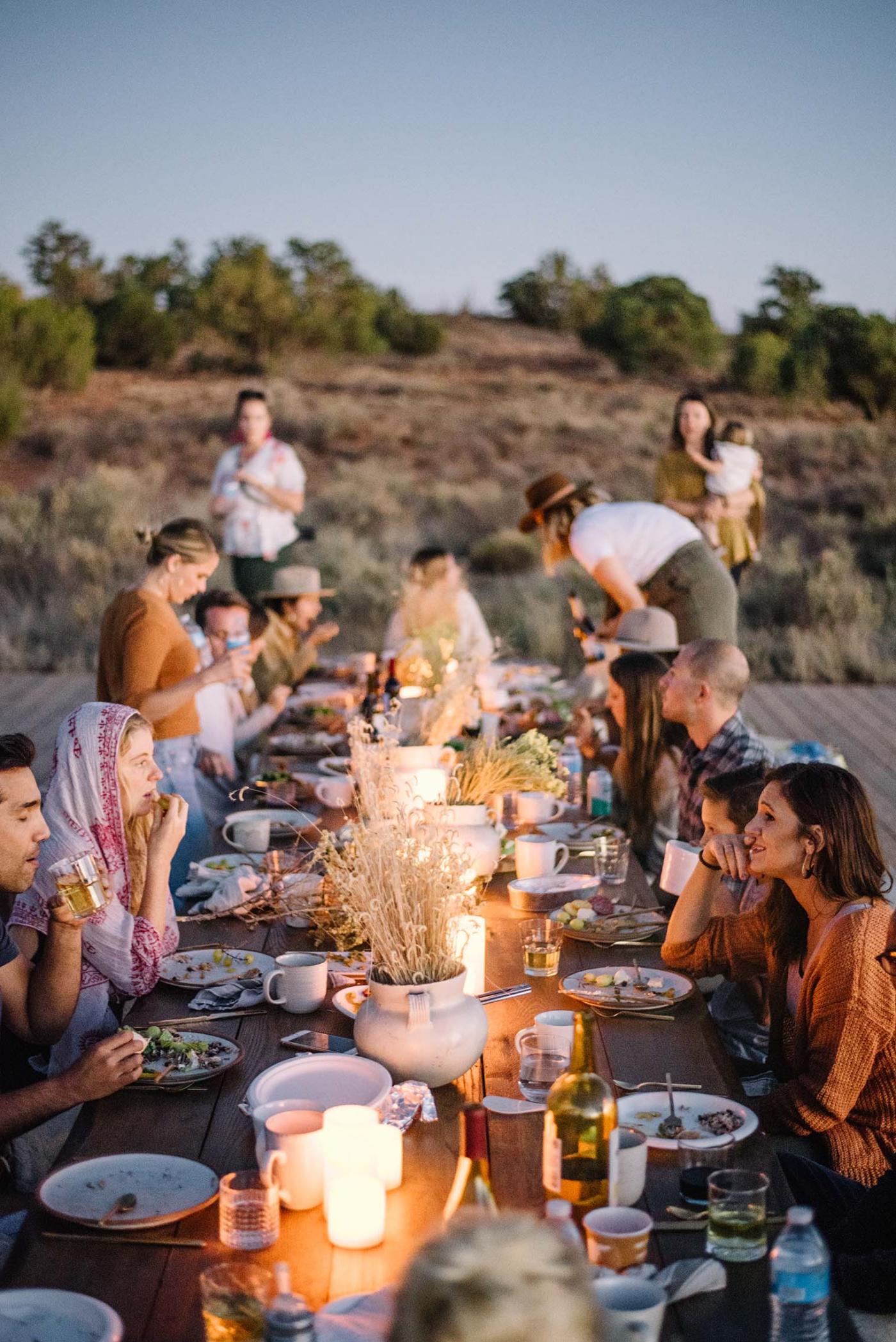 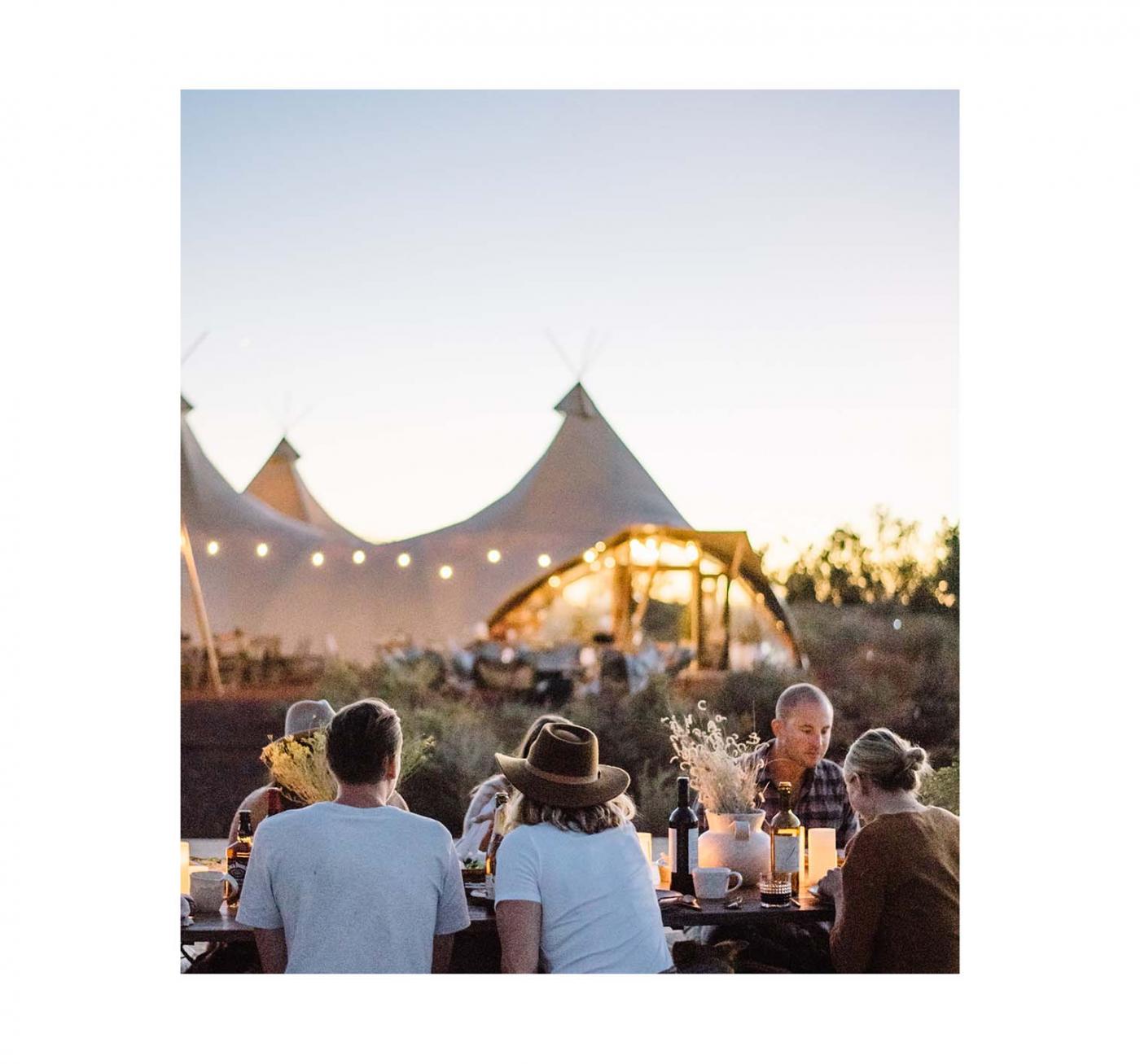 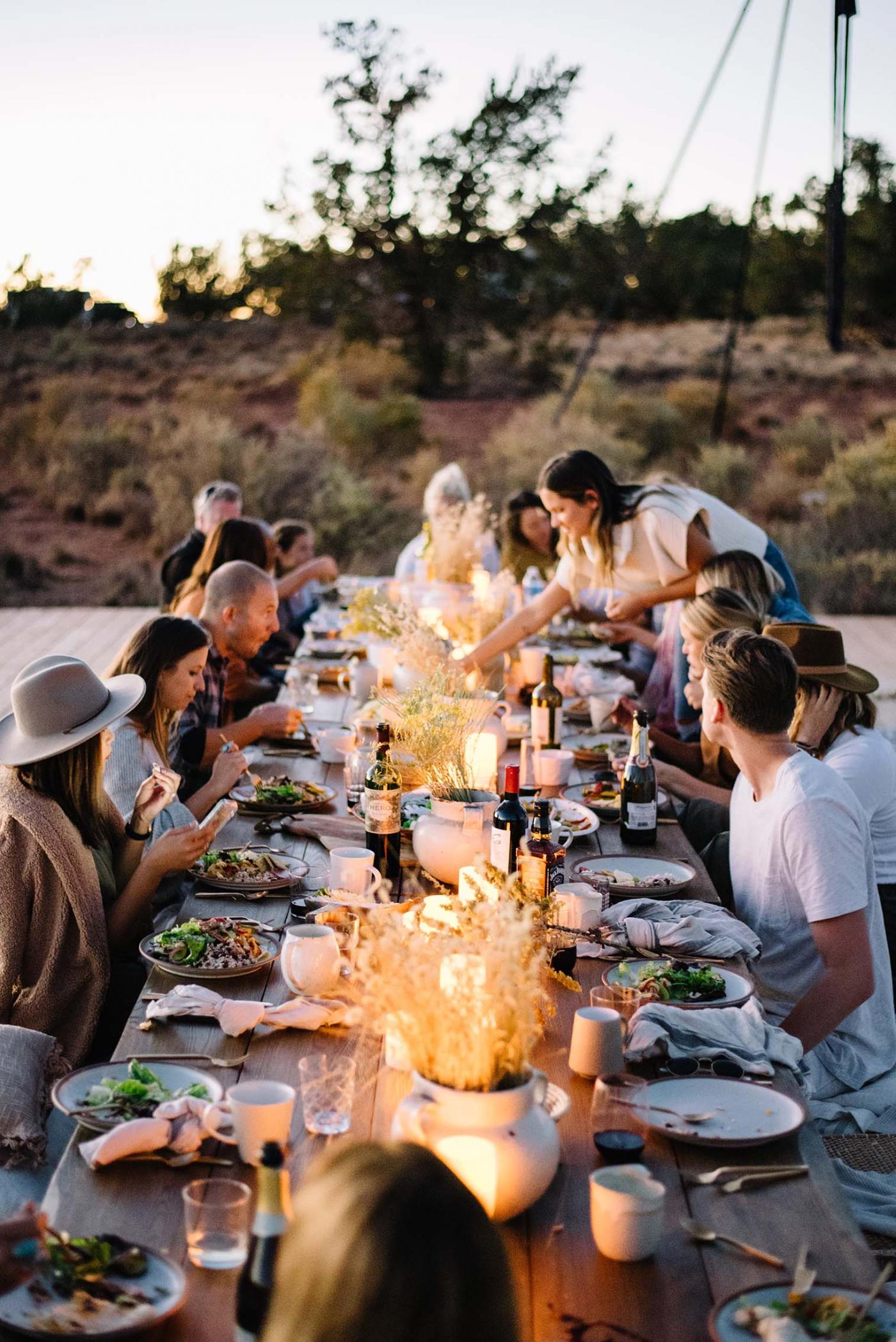 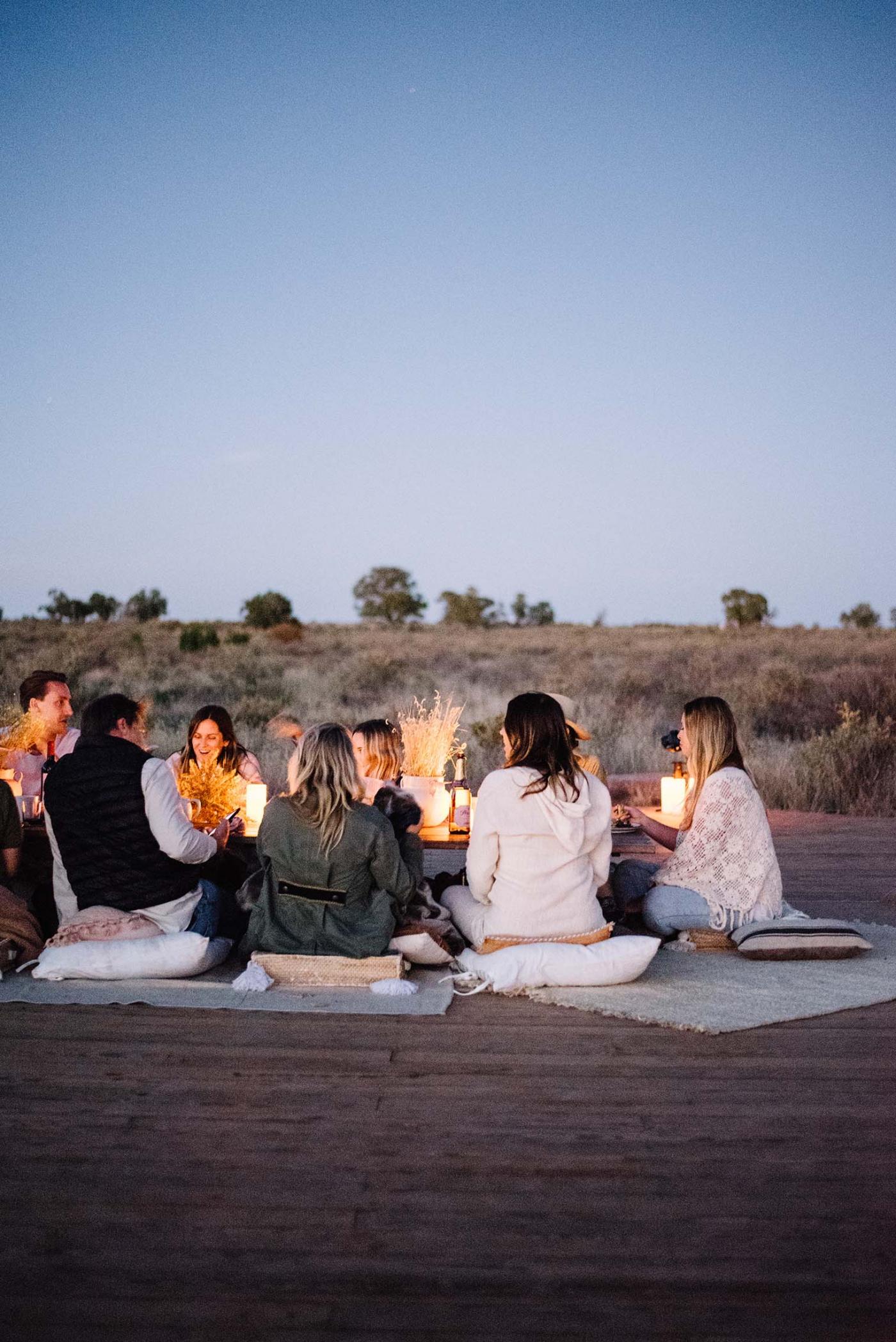 As the sky faded to black and the moon rose over the desert, we gazed at the candle lit, smiling faces around us that were no longer strangers but friends. More wine and spirits were poured as we reveled in our new connections: Dr. Leah of Tribe Medicine and her husband, Matt, Leila and her crew from her yoga studio and restaurant – Trilogy Sanctuary, Jamie of Mint Studio and her family, Stephanie and Dustin of Bailey Made, Melissa and Corbin of Pow Wow, the Under Canvas staff and, of course, The Venue Report team. The clarity of the night sky, connection to the earth and one another, and bountiful drinks and food proved, this is why we get out and gather. 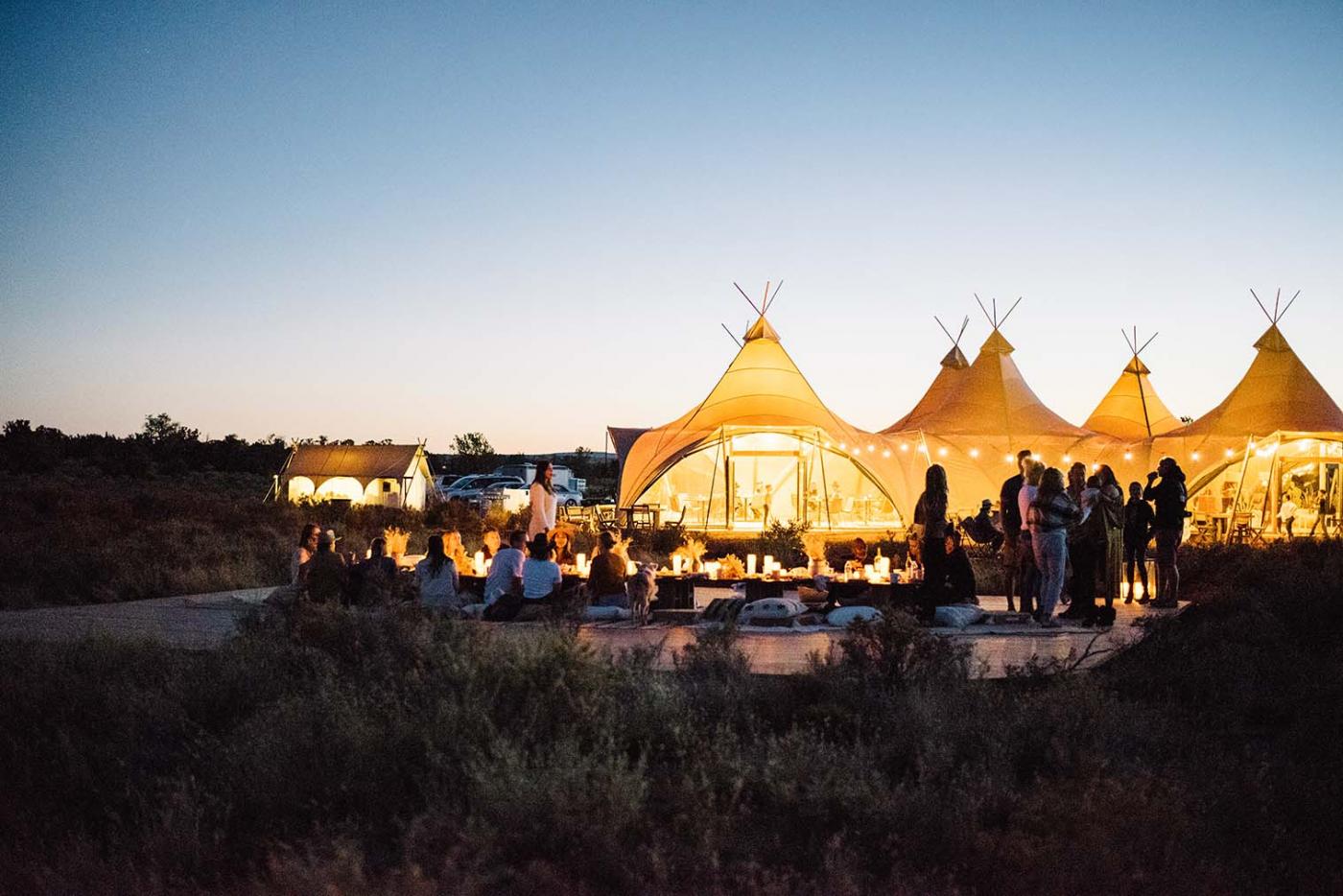 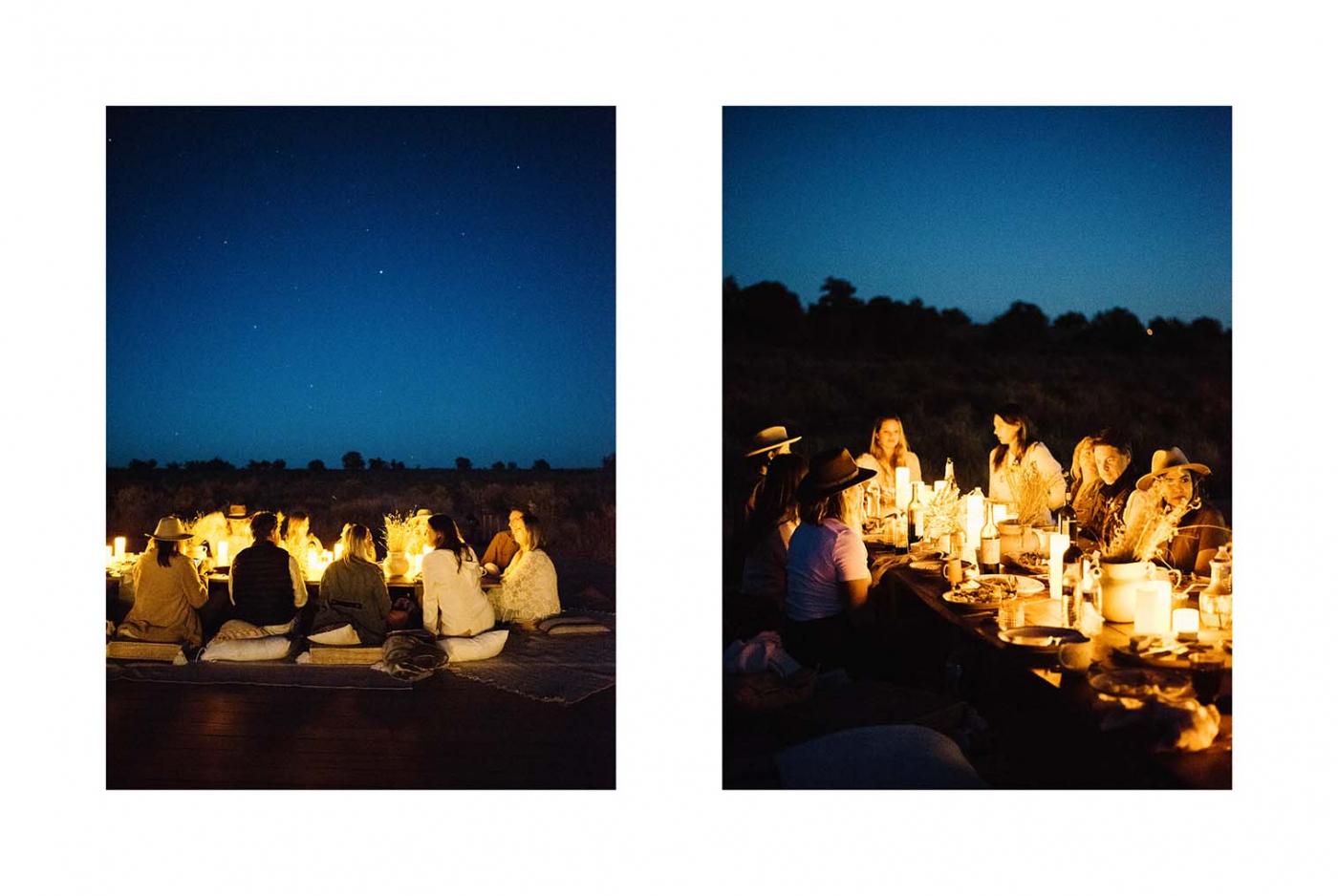 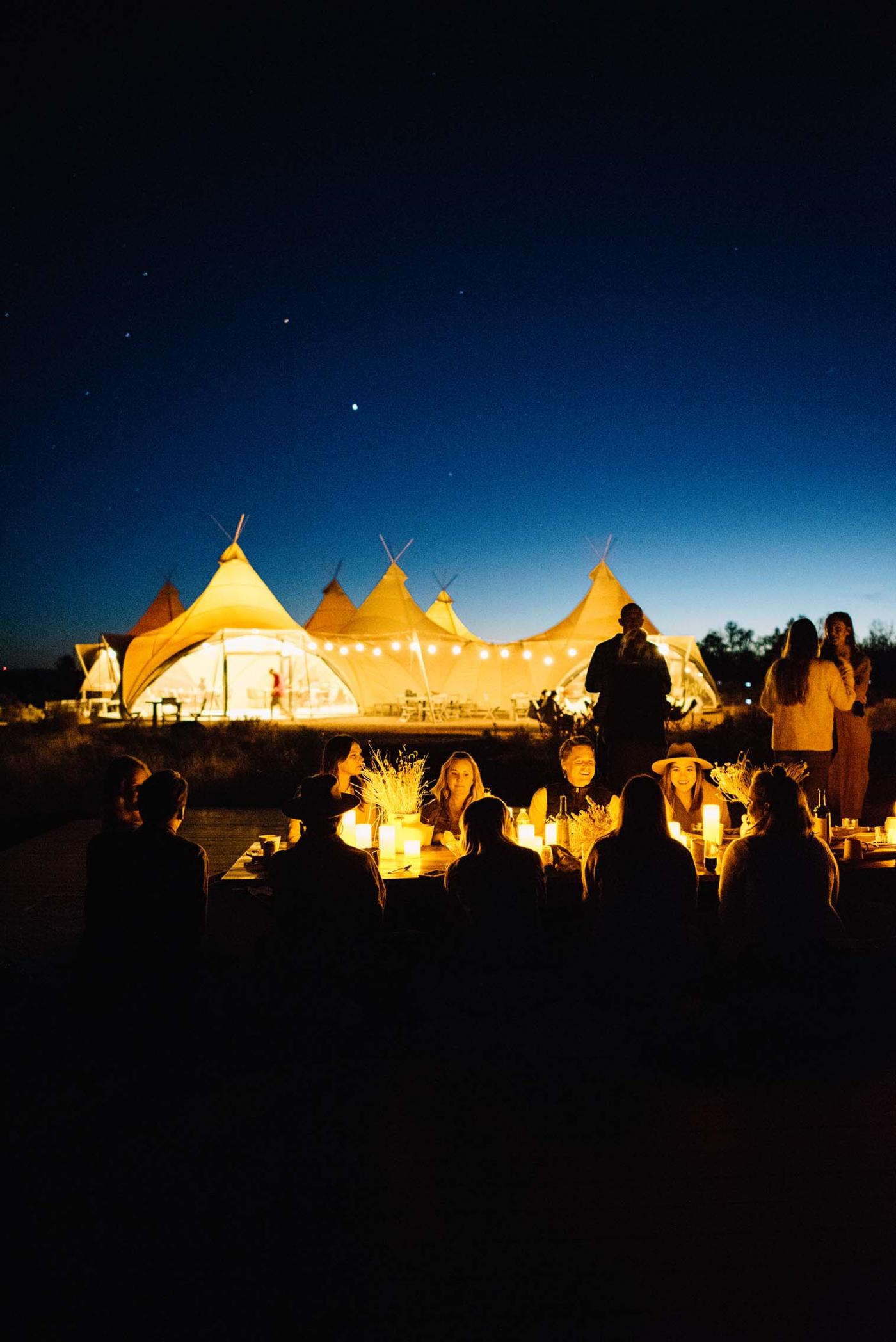 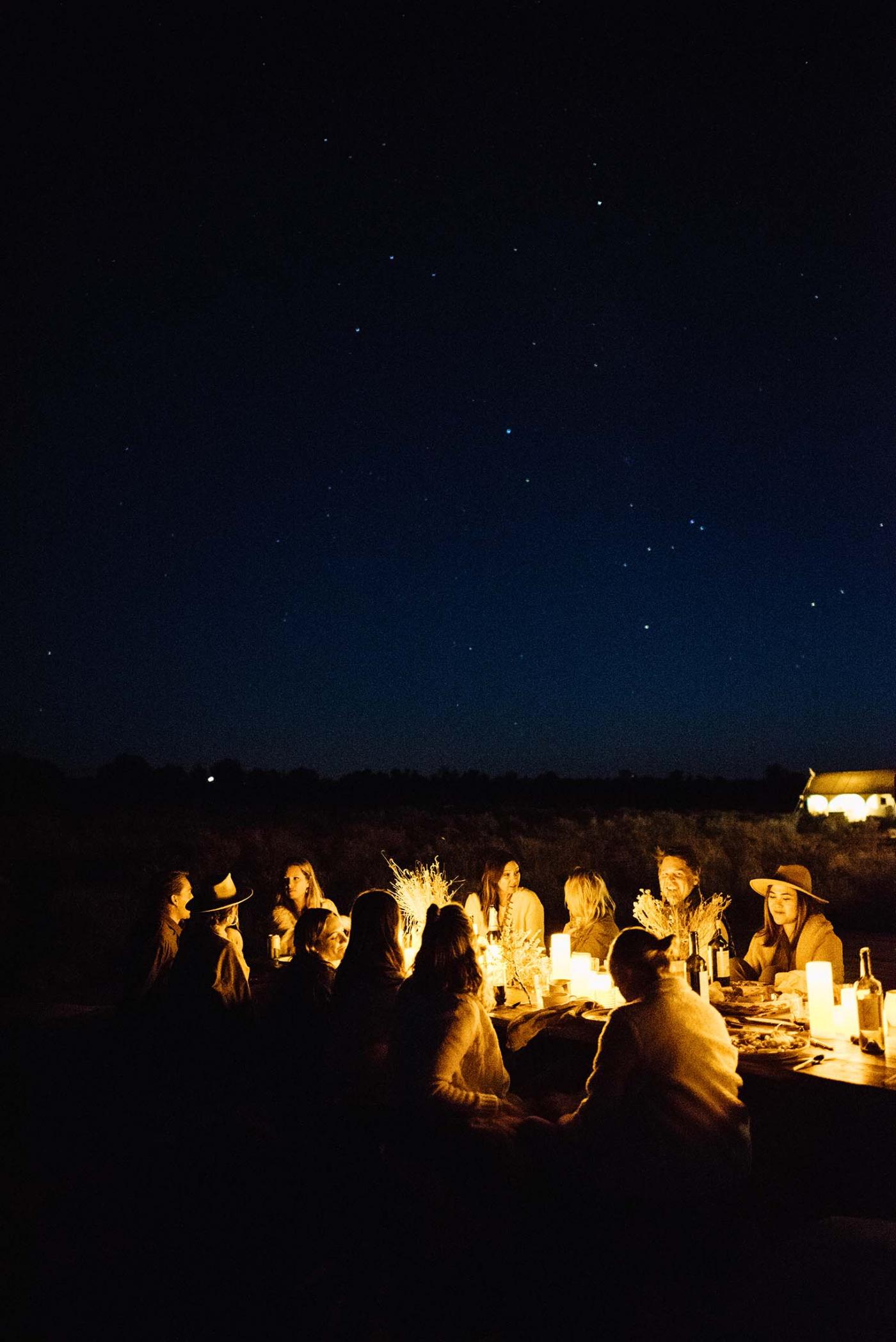 A Group of Stylists Went On An Adventure In The Sweeping Hills of Val d'Orcia, Tuscany

A Blush Pink Waterfront Wedding At Cap Rocat In Spain