What happens when you gather friends and strangers over a stunning live wood edge table for an unforgettable dinner party? We were invited to Lazy Bear, San Francisco’s finest outdoor-inspired restaurant, to meet the team that brings the vision to life and experience the party for ourselves. Lazy Bear is know as one of the best communal dining experiences in the nation, which we immersed ourselves in, but what you may not know is that you can also rent this venue exclusively. 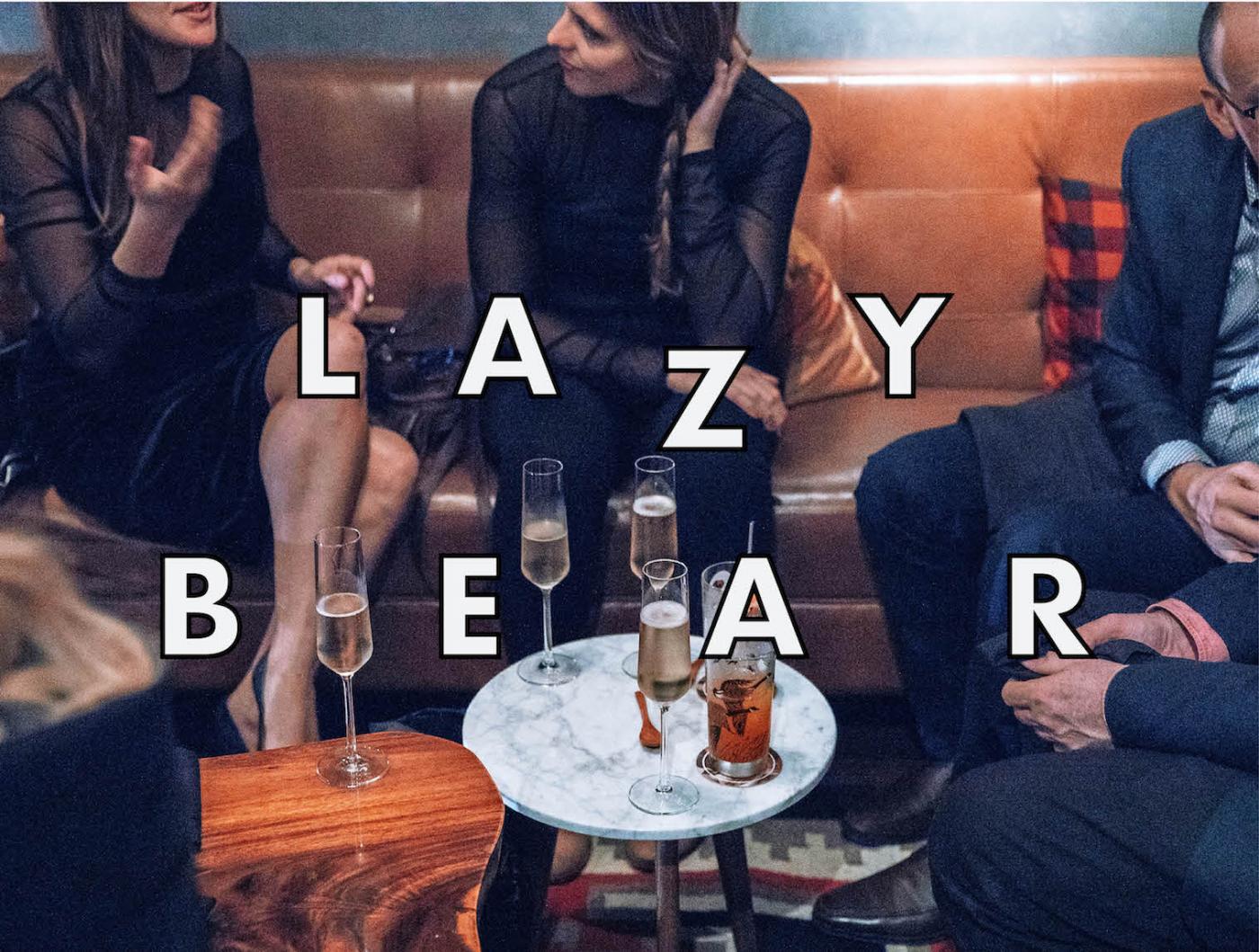 The moment you walk through the door, Lazy Bear feels different than a typical fine dining establishment. From the retro-camp tchotchkes lining the walls, to the national park mural in the dining room, to the foraging of wild goods, nostalgia for experiences and flavors of the outdoors is a unifying thread across every element of this gathering. 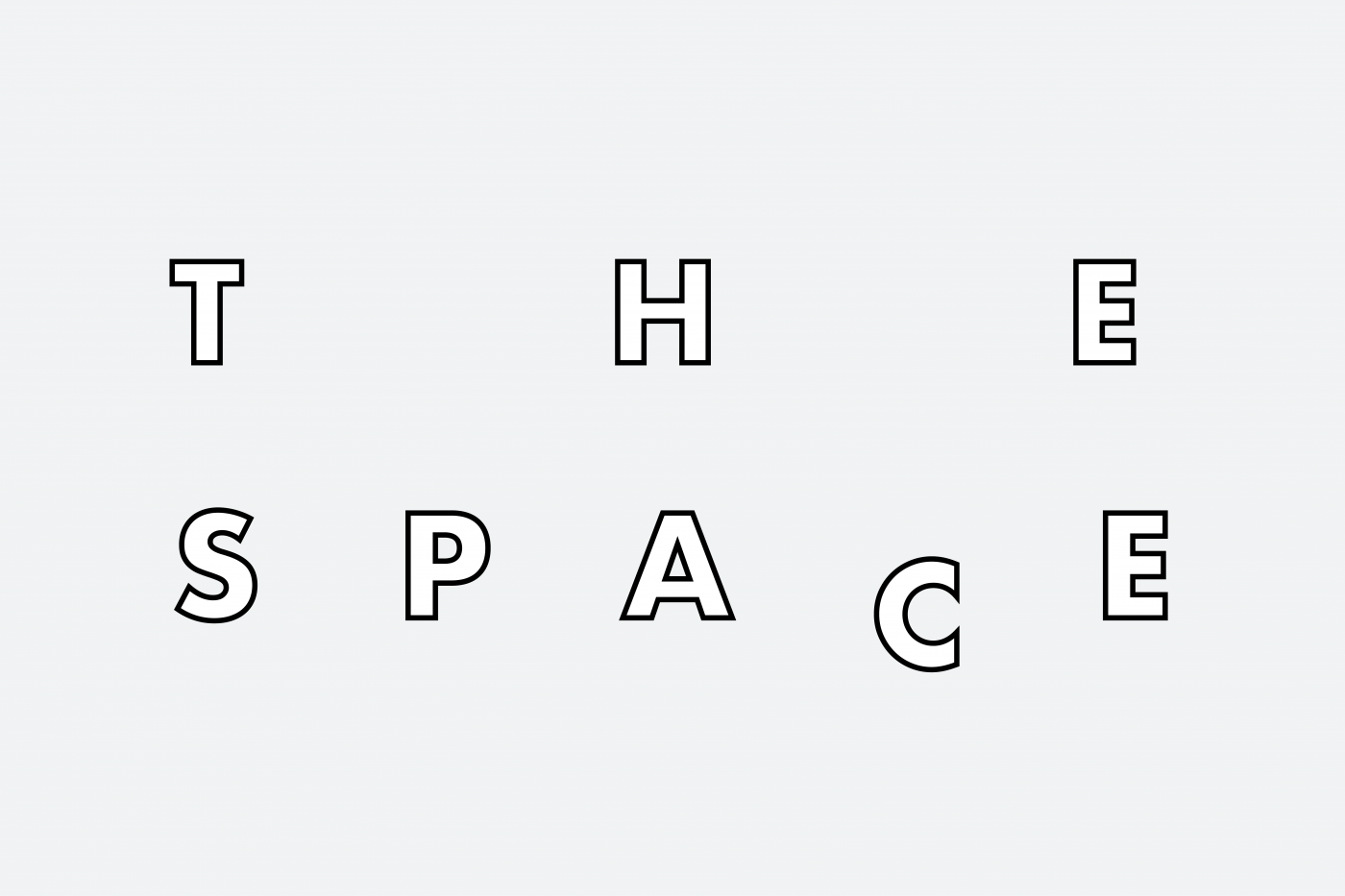 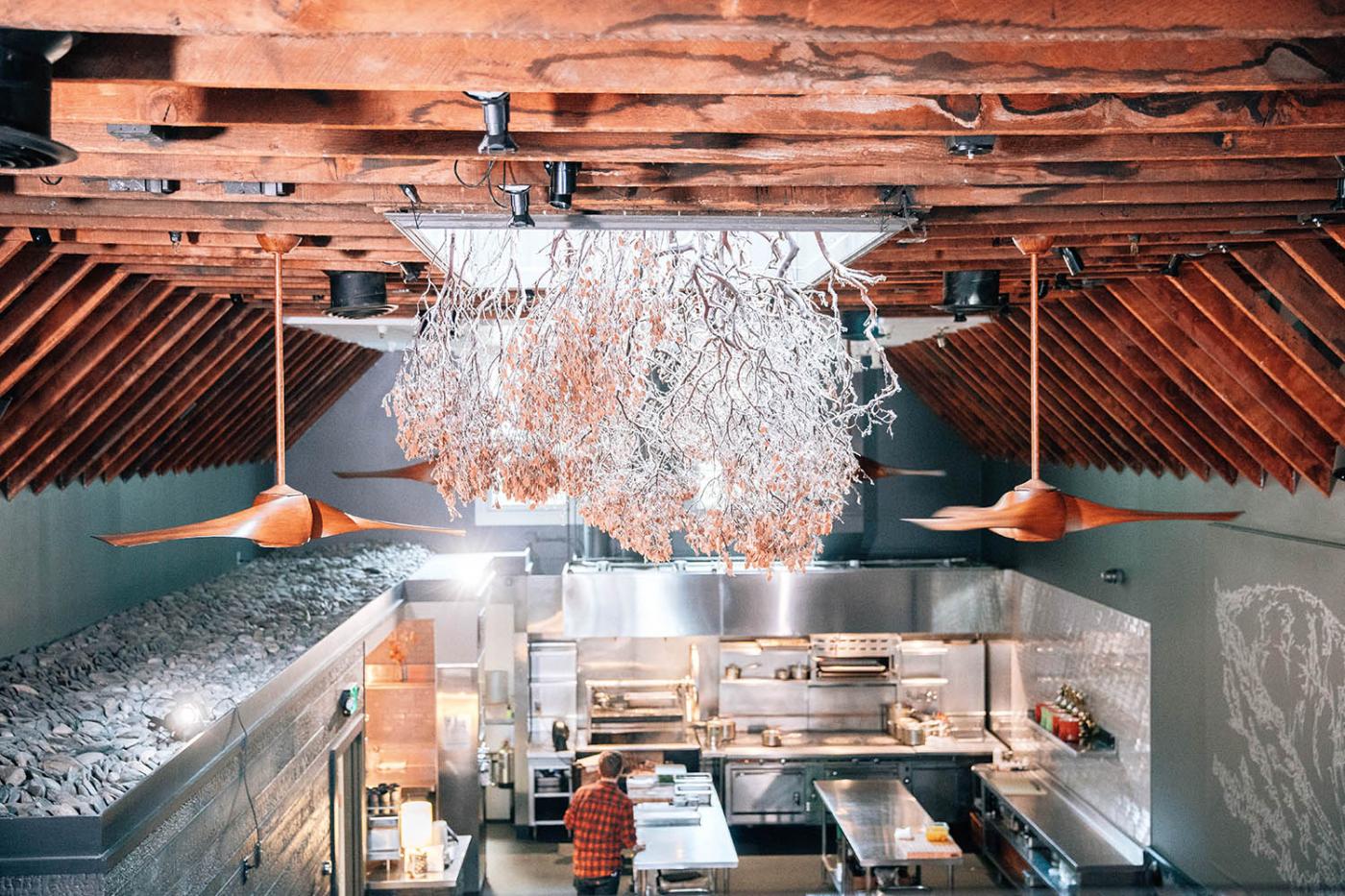 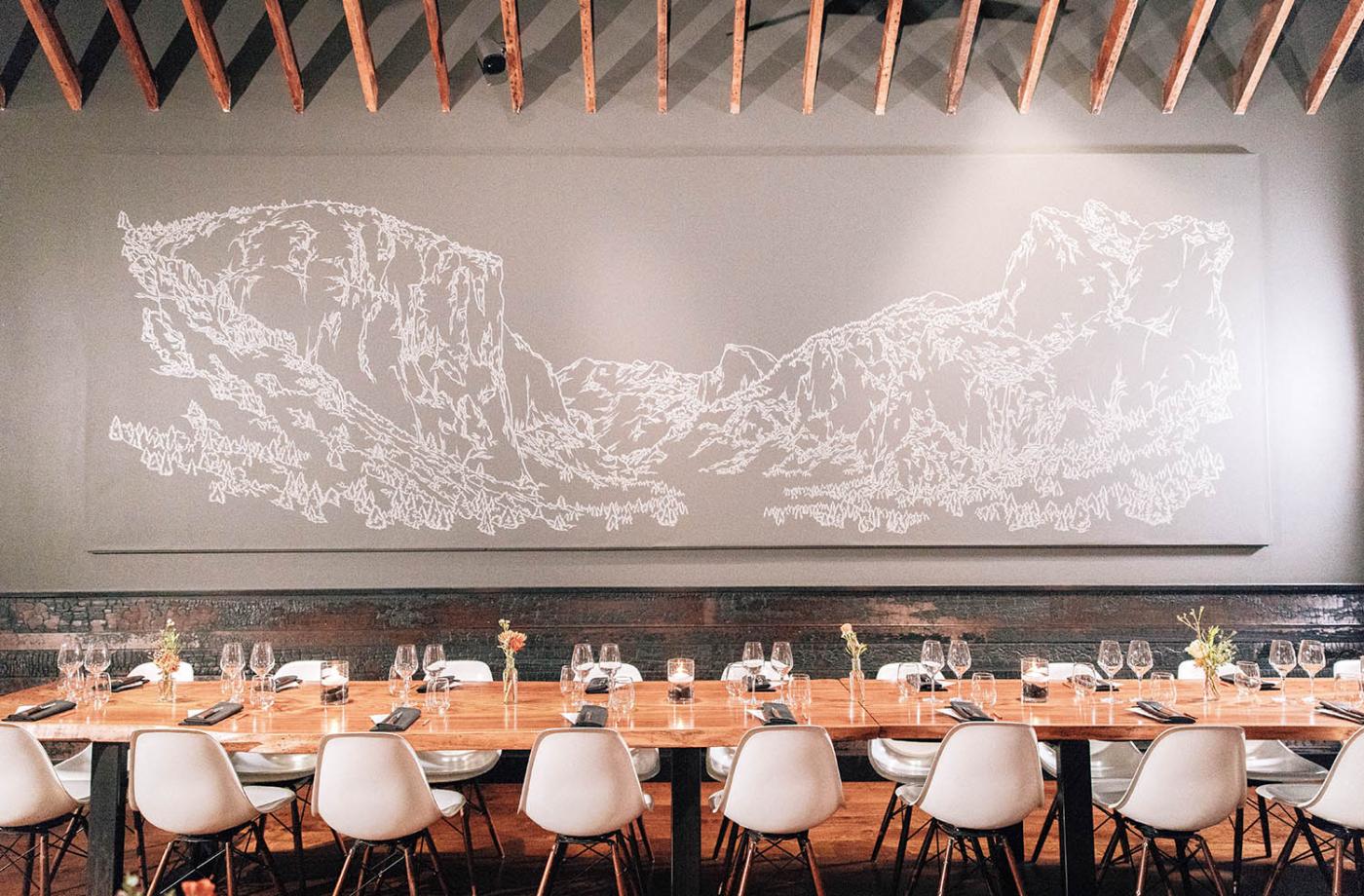 To kick off the party, we were escorted to the mezzanine where we communed with fellow diners over cocktails from a crystal punch bowl. Outfitted with a wood burning fireplace, camping curios and, no surprise, lots of bears, this space evokes a feeling of being in your best friend’s cabin in the woods more than being in a Michelin 2 star restaurant. After sharing a few drinks and ethereal appetizers, like whipped scrambled eggs and Marin miyagi oysters, conversations between strangers became more casual and the party progressed to the main dining room for the continuation of the most epic dinner party we’ve ever experienced. 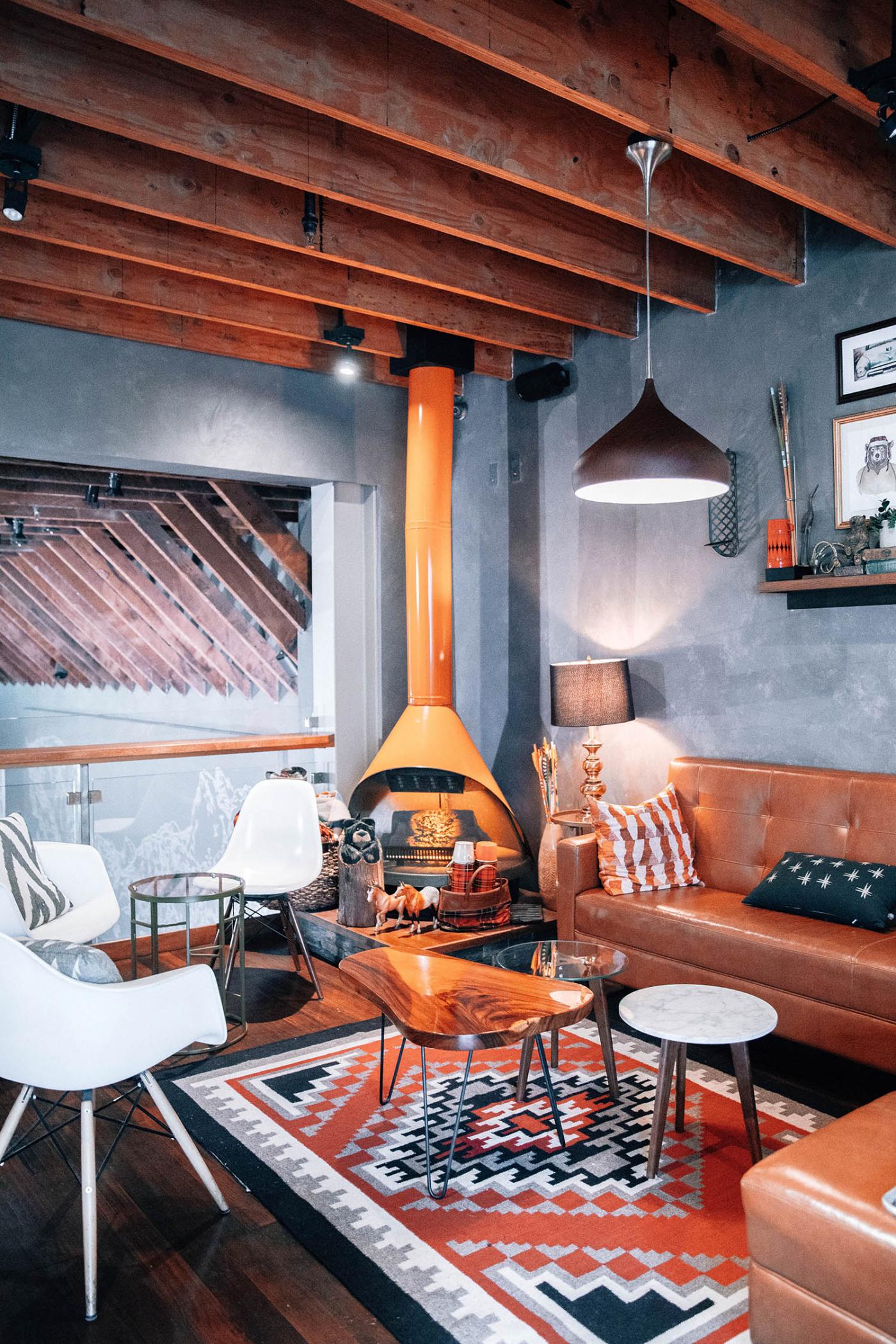 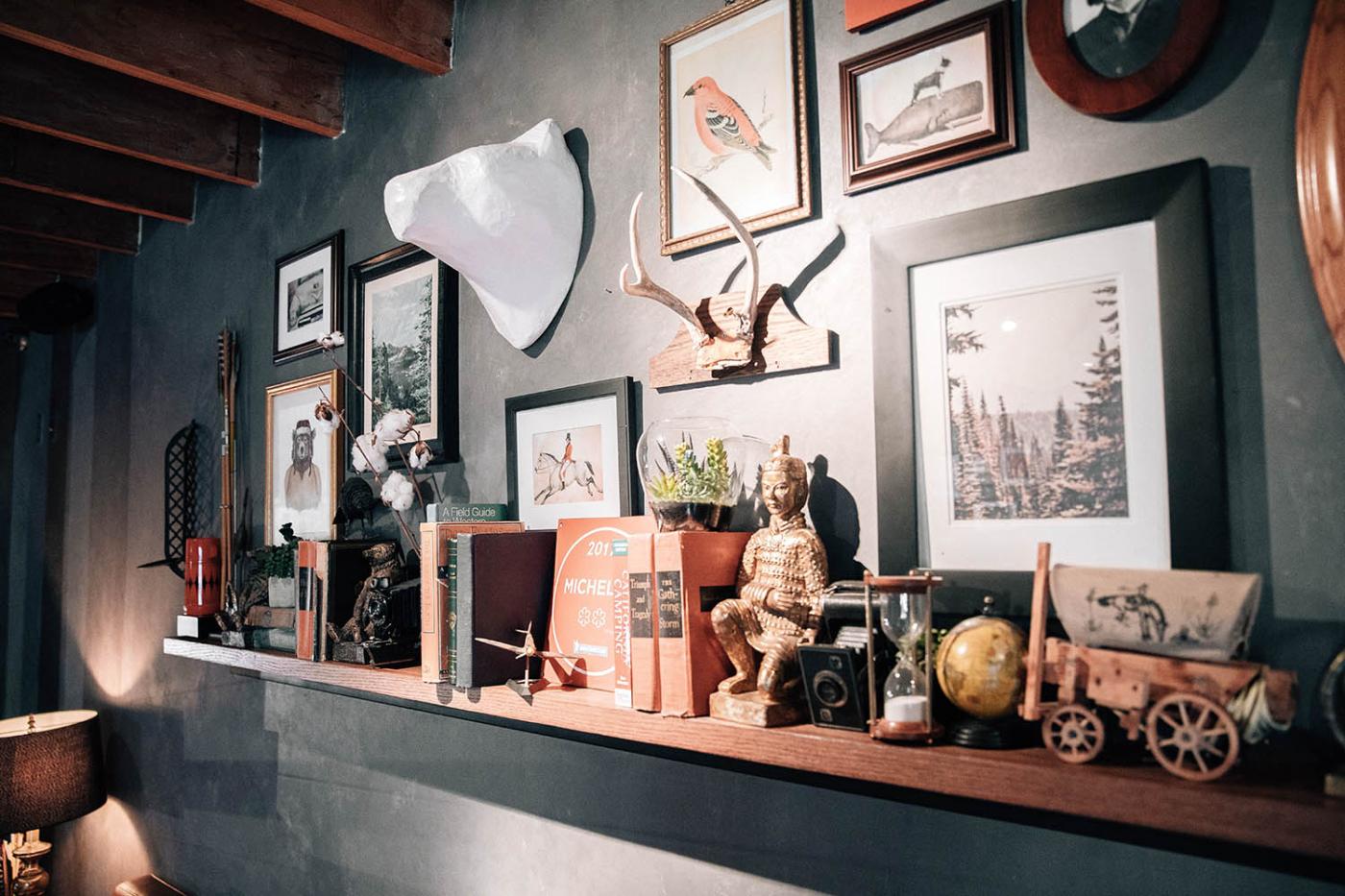 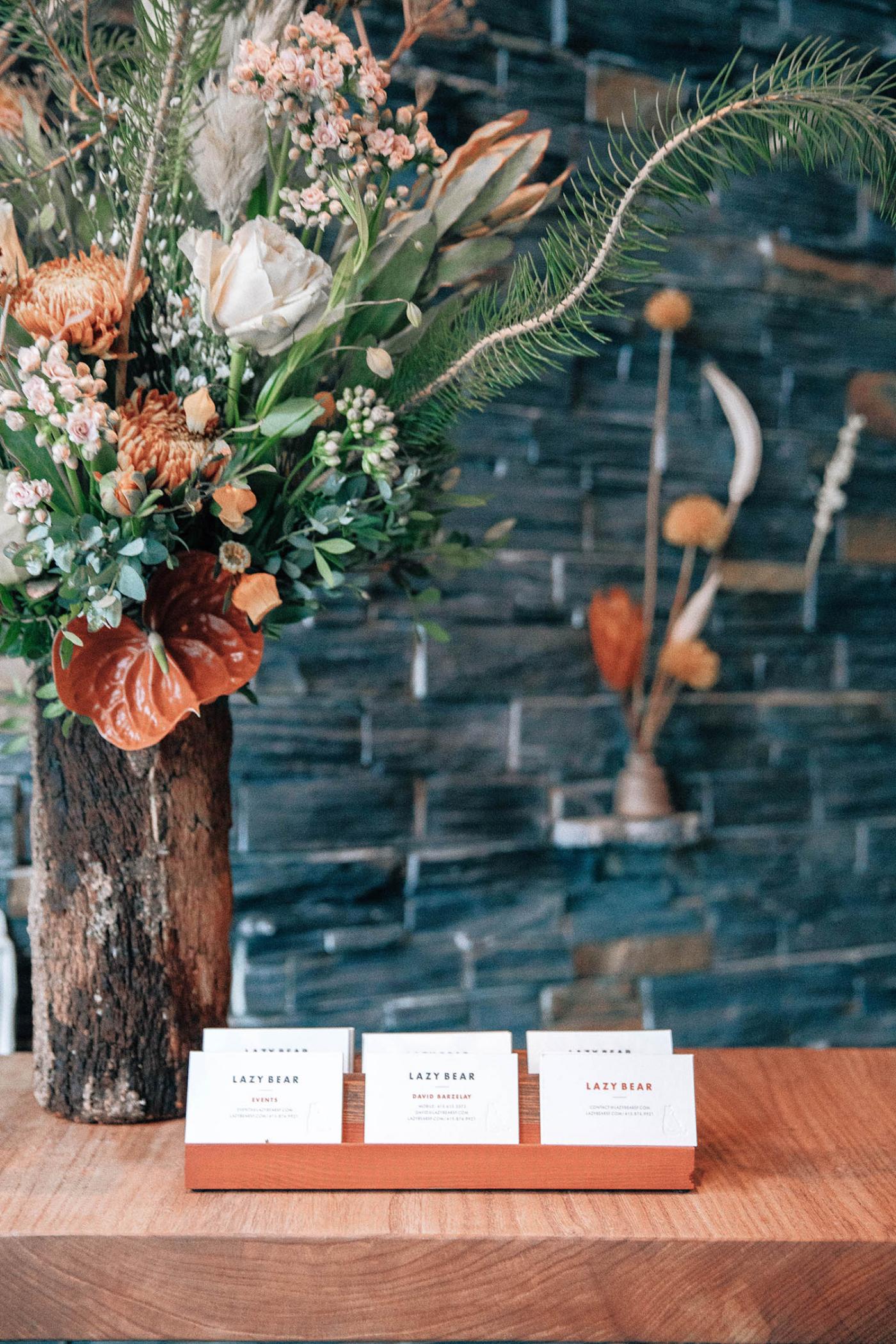 To understand the vision behind this brilliant dinner party, it helps to meet the hosts. David Barzelay, the eponymous anagram (Barzelay = Lazy Bear) founder and chef behind Lazy Bear is passionate and curious about every element of the experience he brings to his guests. His quest to unite people over a meaningful meal began over 8 years ago in his own apartment where he hosted pop up dinner parties for friends. As the popularity (and waitlist) of these dinners grew, the team moved to a brick and mortar location in San Francisco’s Mission District where, instead of reserving your own table, you book a seat at a communal table.

Unsurprisingly, Barzelay’s team is as passionate about adventure and gathering as he is. There’s Kelly Evan’s the General Manager, who dons a velvet blazer like a champ to welcome guests and sees to every nuance of the experience. There’s Anna Lee, the operations manager who ensures that everything going on behind the scenes looks effortless and breezy. Bar Director Nick Torres crafts cocktail perfection night after night, spotlighting only the most seasonally ripe produce in his creations. And Beverage Director Matt Dulle rounds out the expert leadership team by pairing drinks and bites in just the right way.


Where did the inspiration for the concept behind Lazy Bear come from?

David: The whole idea of gatherings being the ideal social and food experience was what prompted me to create this concept. I found that when I went to a fine dining restaurant and had a great meal, it lacked certain things that a simple dinner party had. I wanted to create something where we could use the format of dinner parties to echo a certain nostalgia for the shared American food experience.

So much of our cuisine and experience is inspired by nostalgia for adventurous childhoods spent outdoors, unsupervised. I grew up in Florida with a lot of wilderness around me and a lot of opportunities to explore outdoors. I spent a lot of time outdoors, going fishing with my dad, going on hikes outdoors and camping. There’s a freedom and appreciation to it. 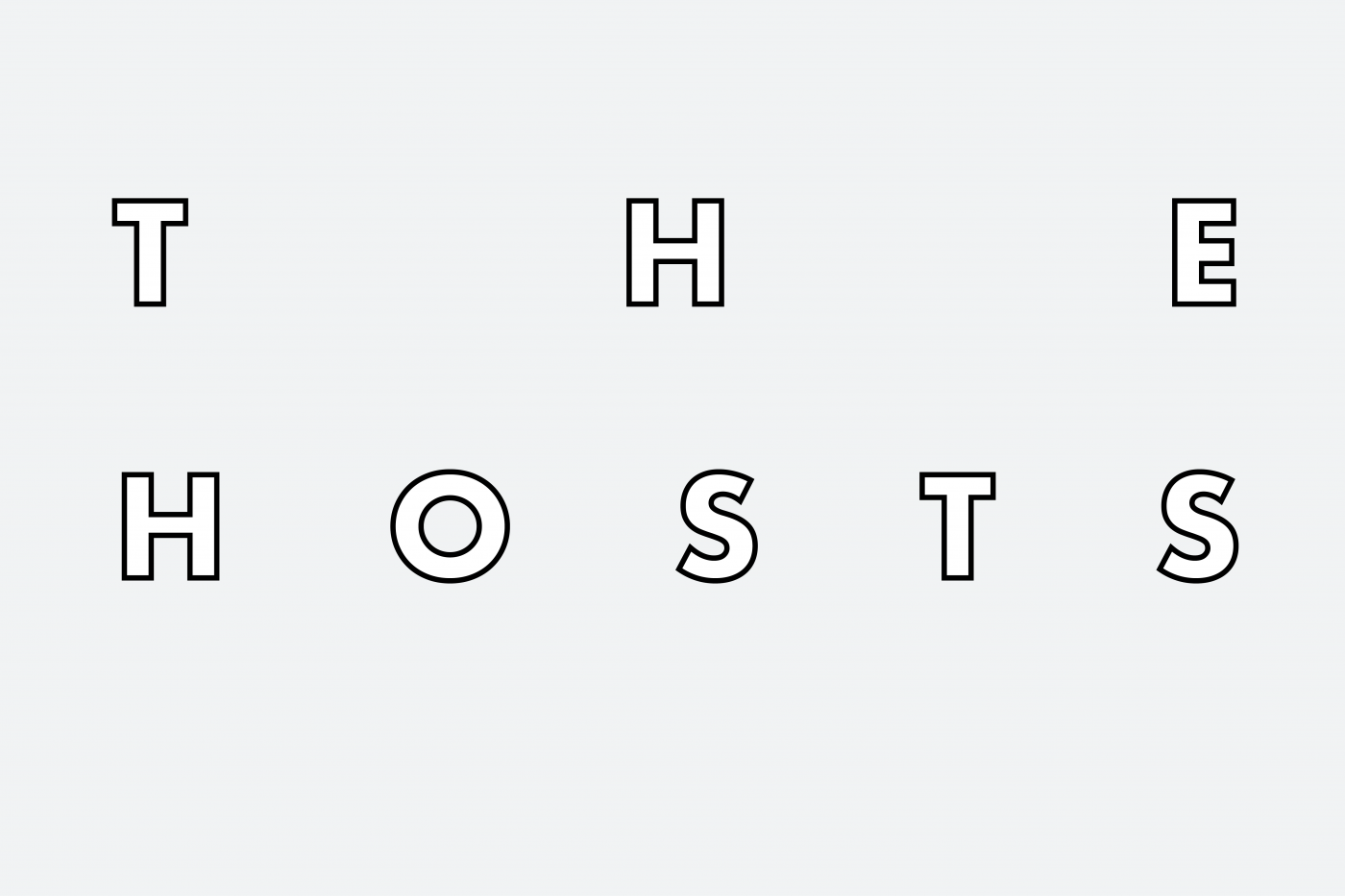 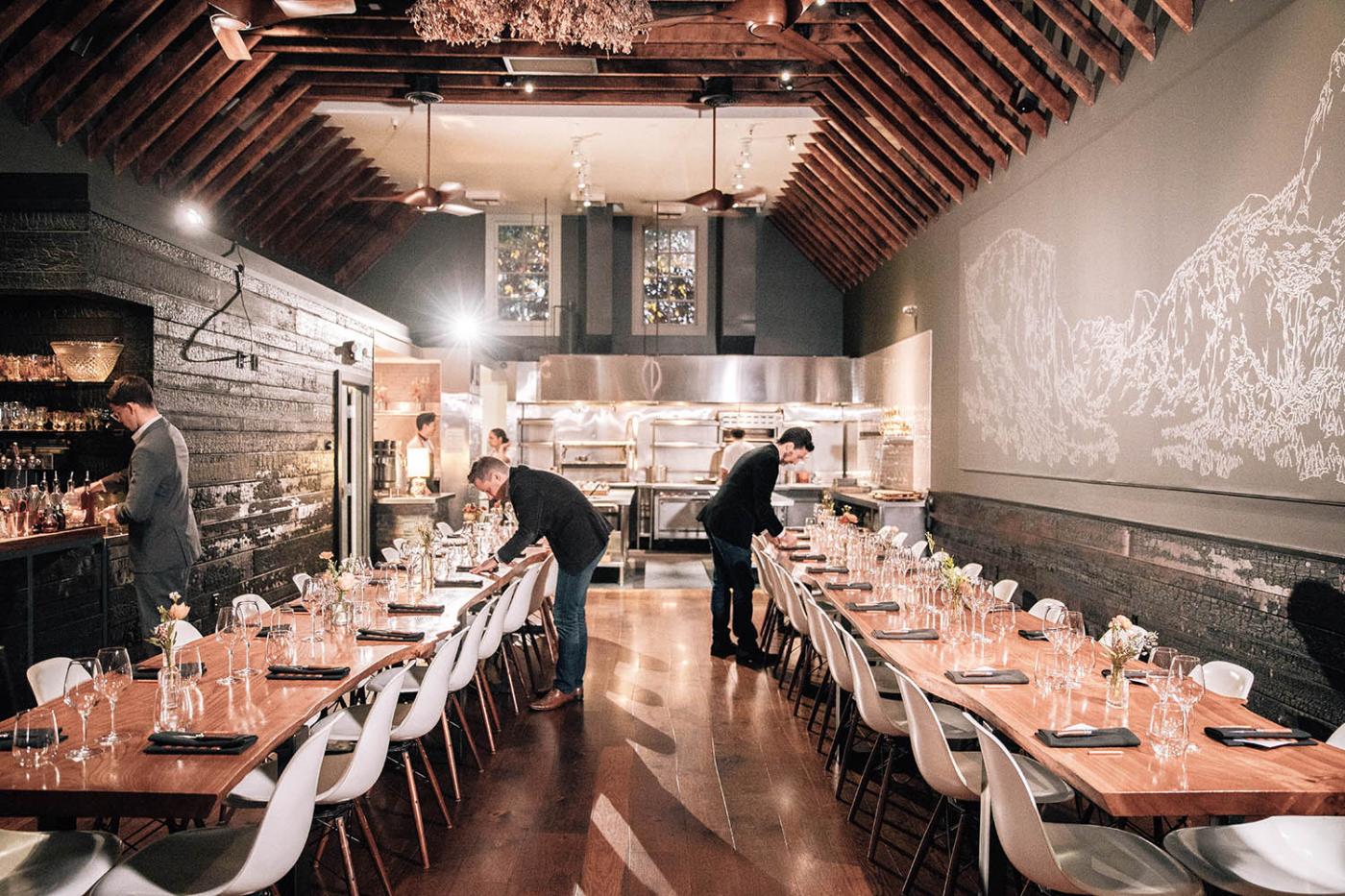 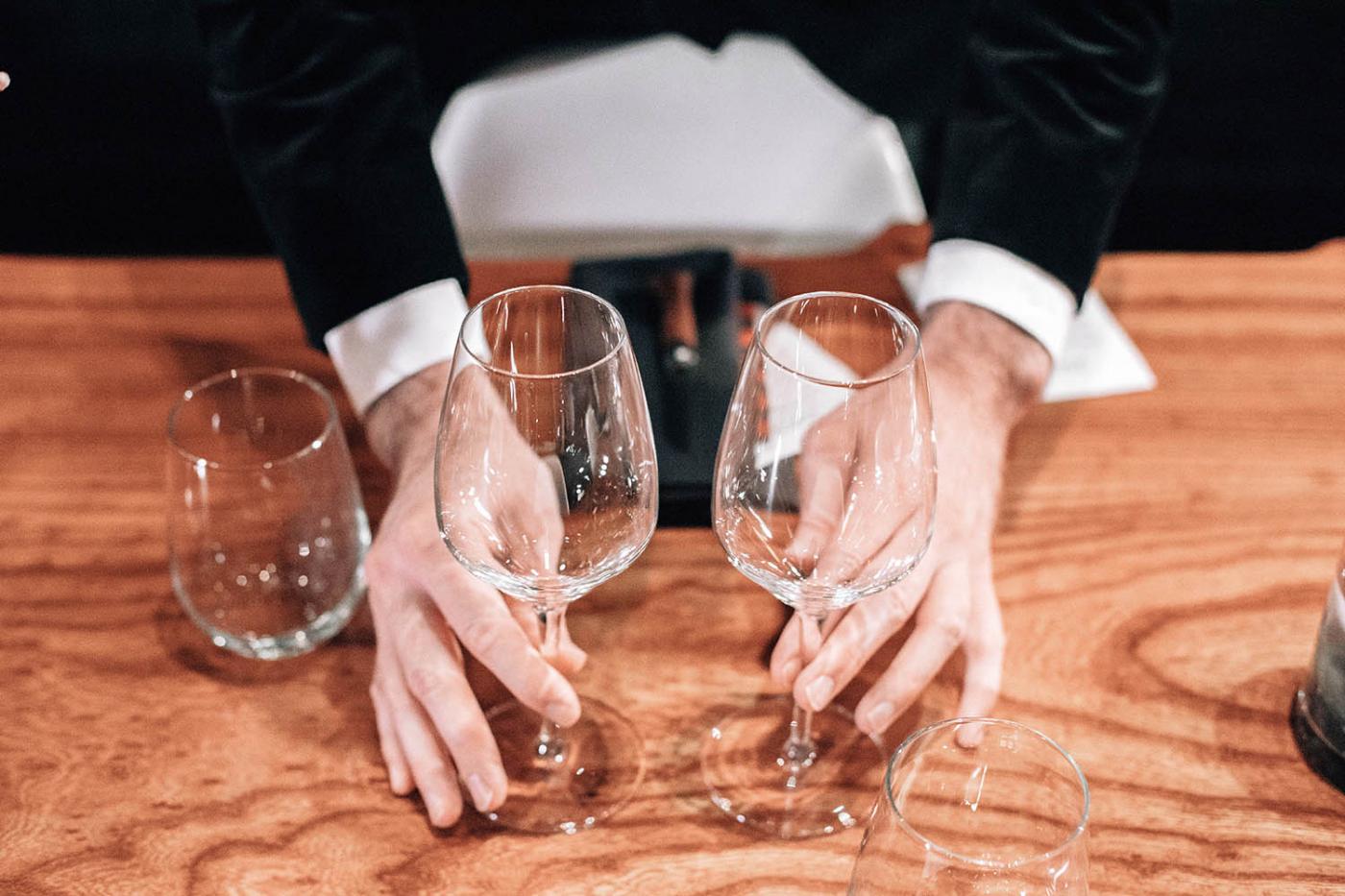 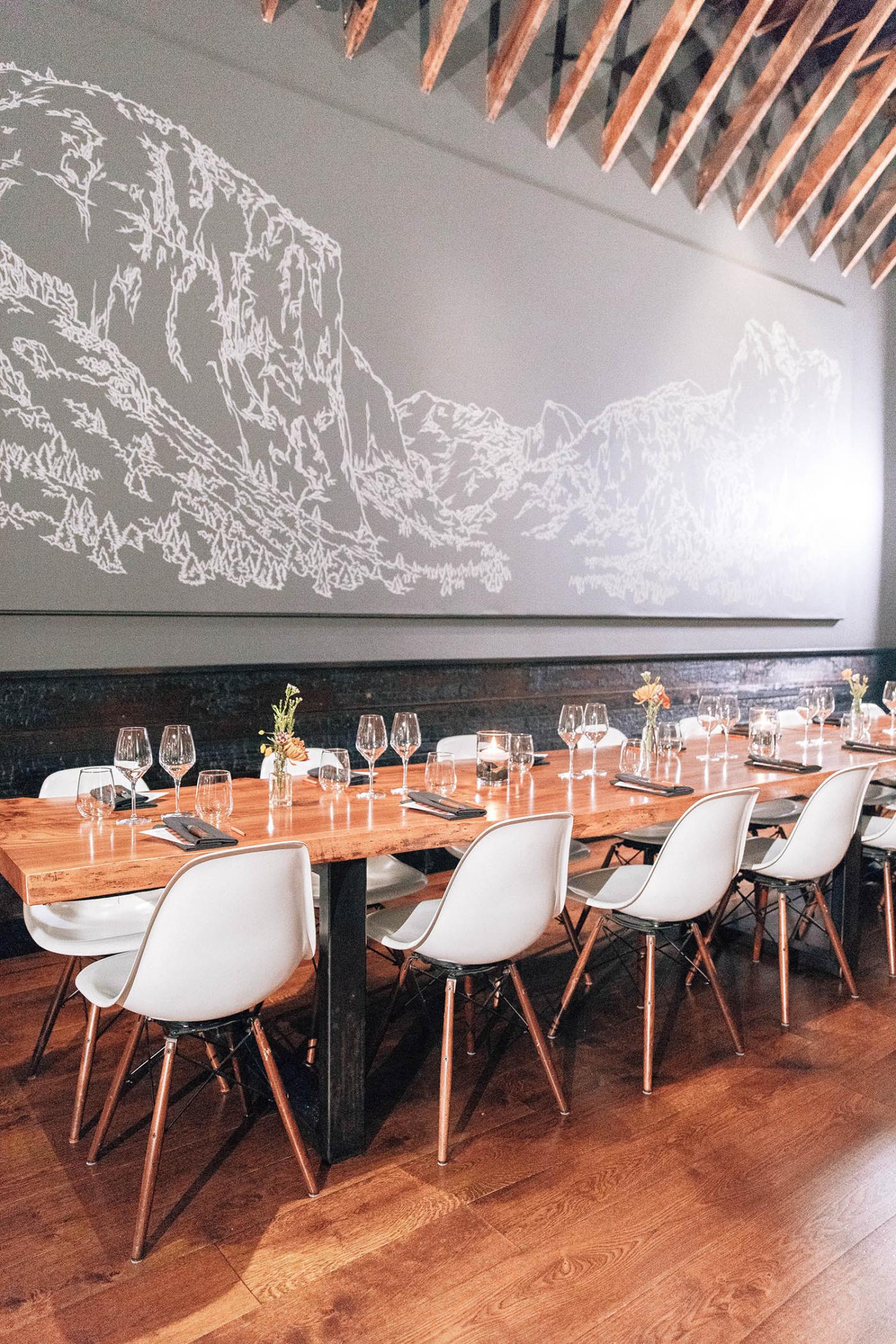 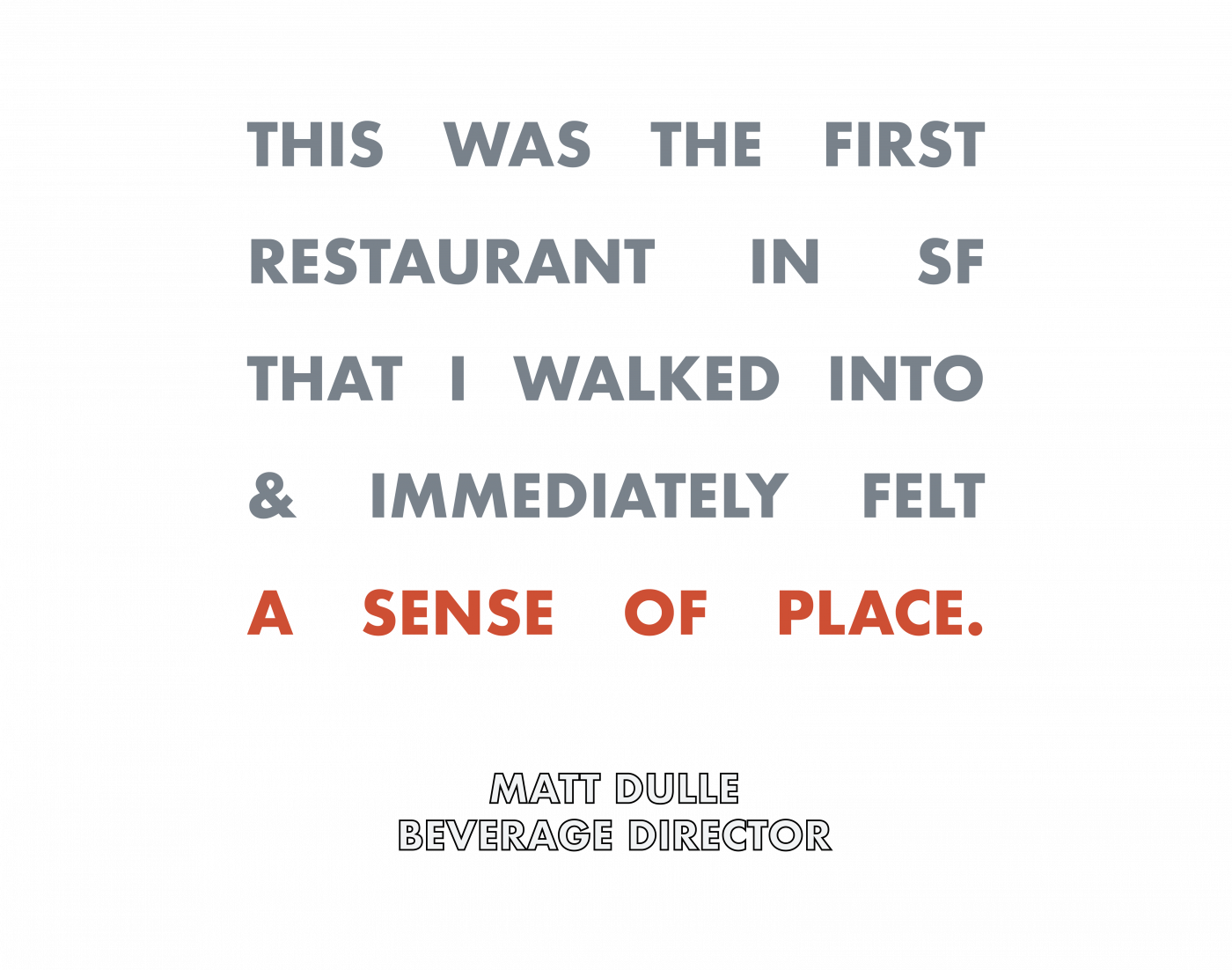 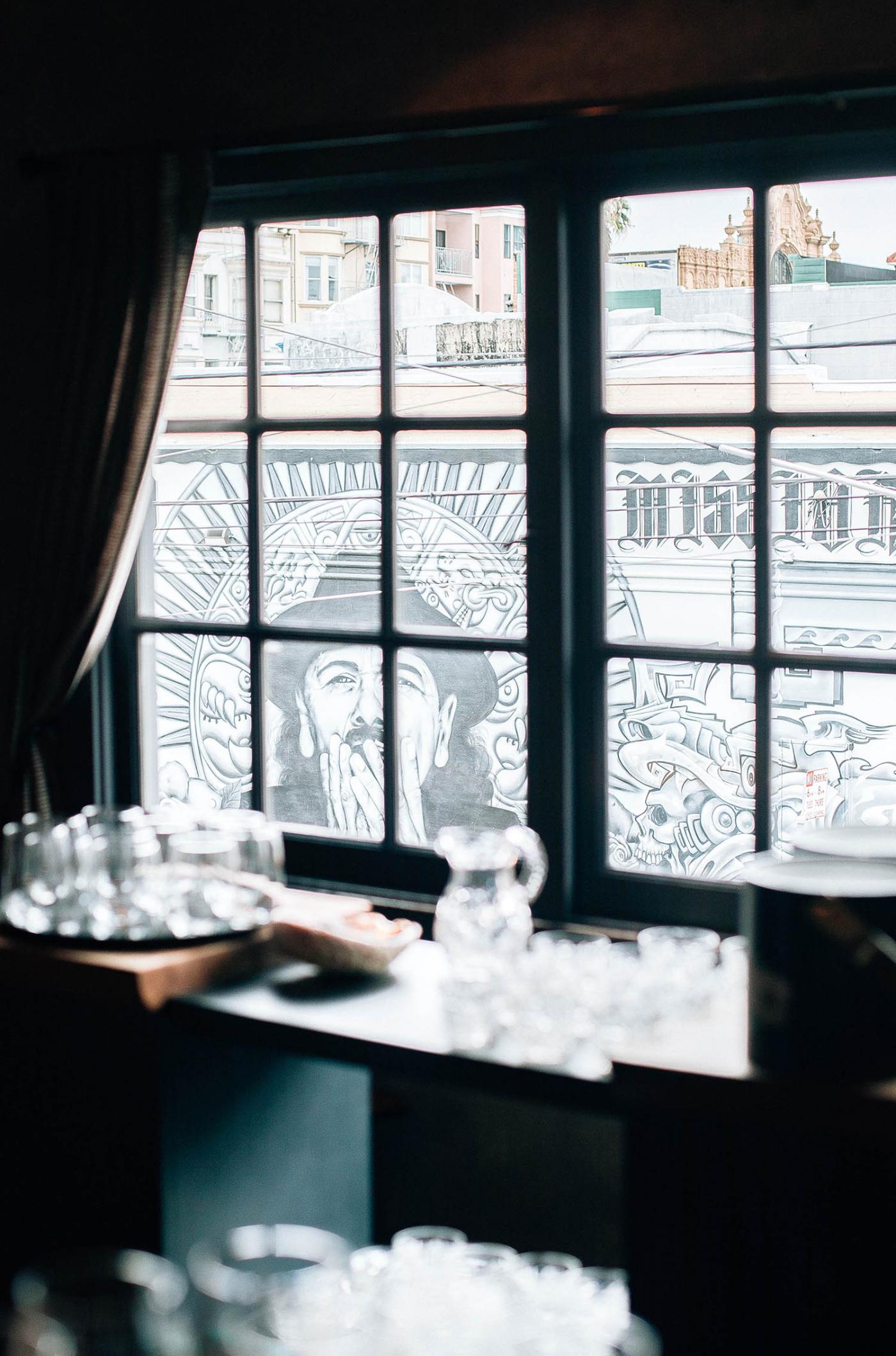 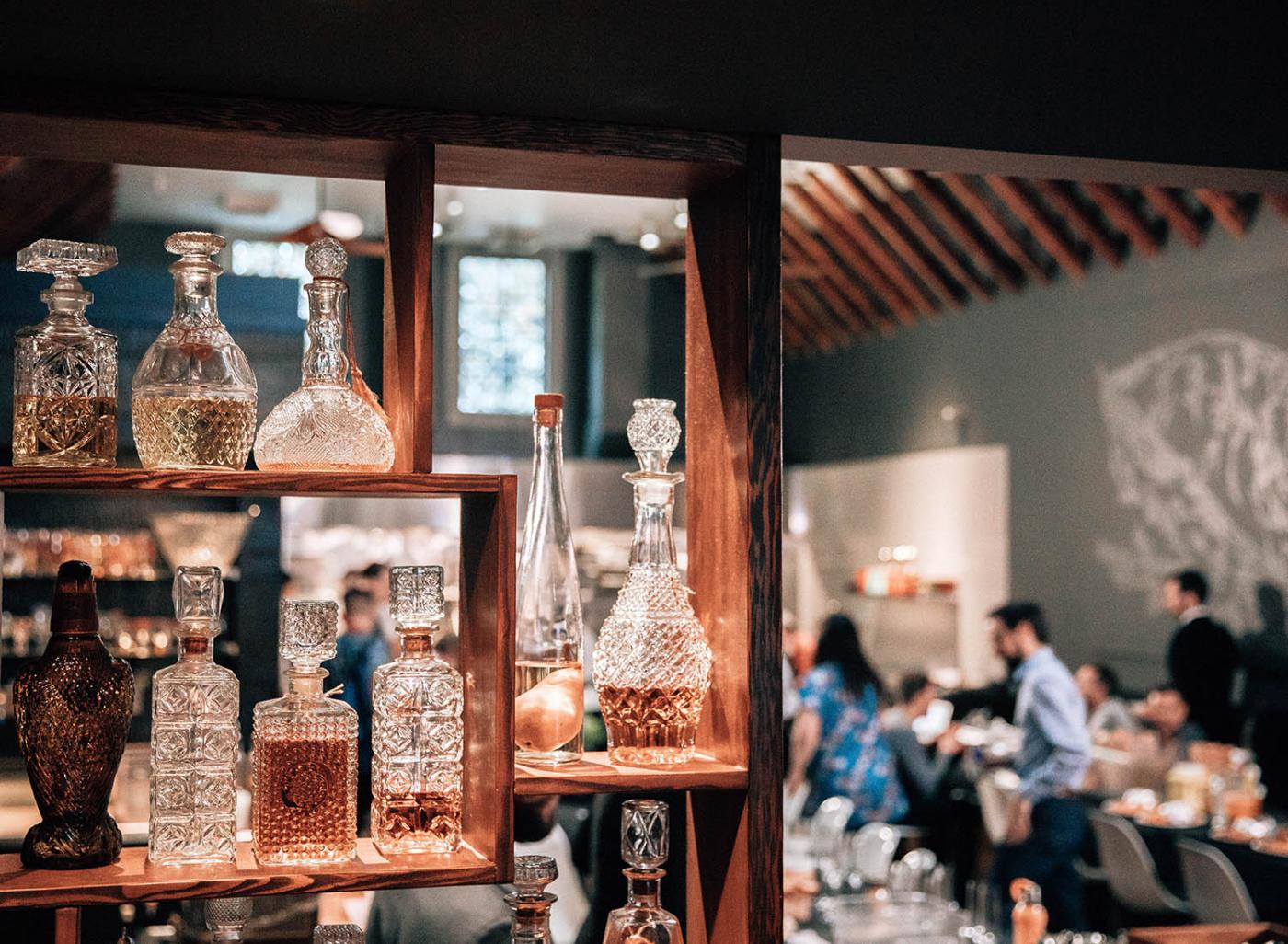 Your space has a cozy vibe with two long communal tables- how did you decide on this aesthetic and how does this influence the way guests engage with your space?

David: When it came time to design the space we had the name Lazy Bear and it sounds like it would be a summer camp and we really went with it. It ties into the theme of nostalgia and wilderness and scouting, but it’s more than that; it’s an evocation of the Golden Age of American dinner parties.

We do a lot of things to bring levity and fun to the meal and show diners that it’s okay to treat this as a fun party and not as a solemn church-like dining experience. The best way to encourage our guests to have fun is for us to have fun, which comes from a place of us loving what we’re doing. 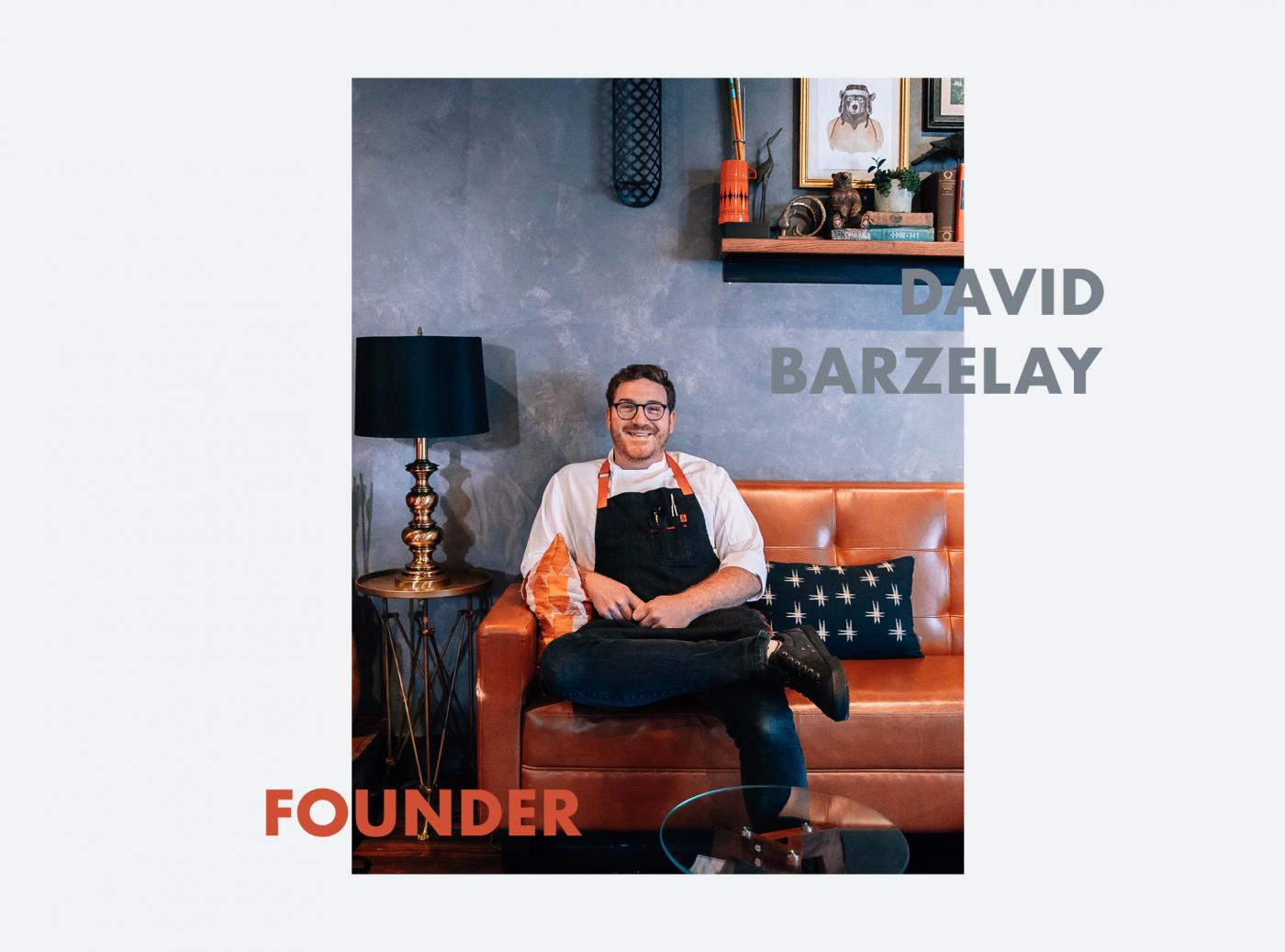 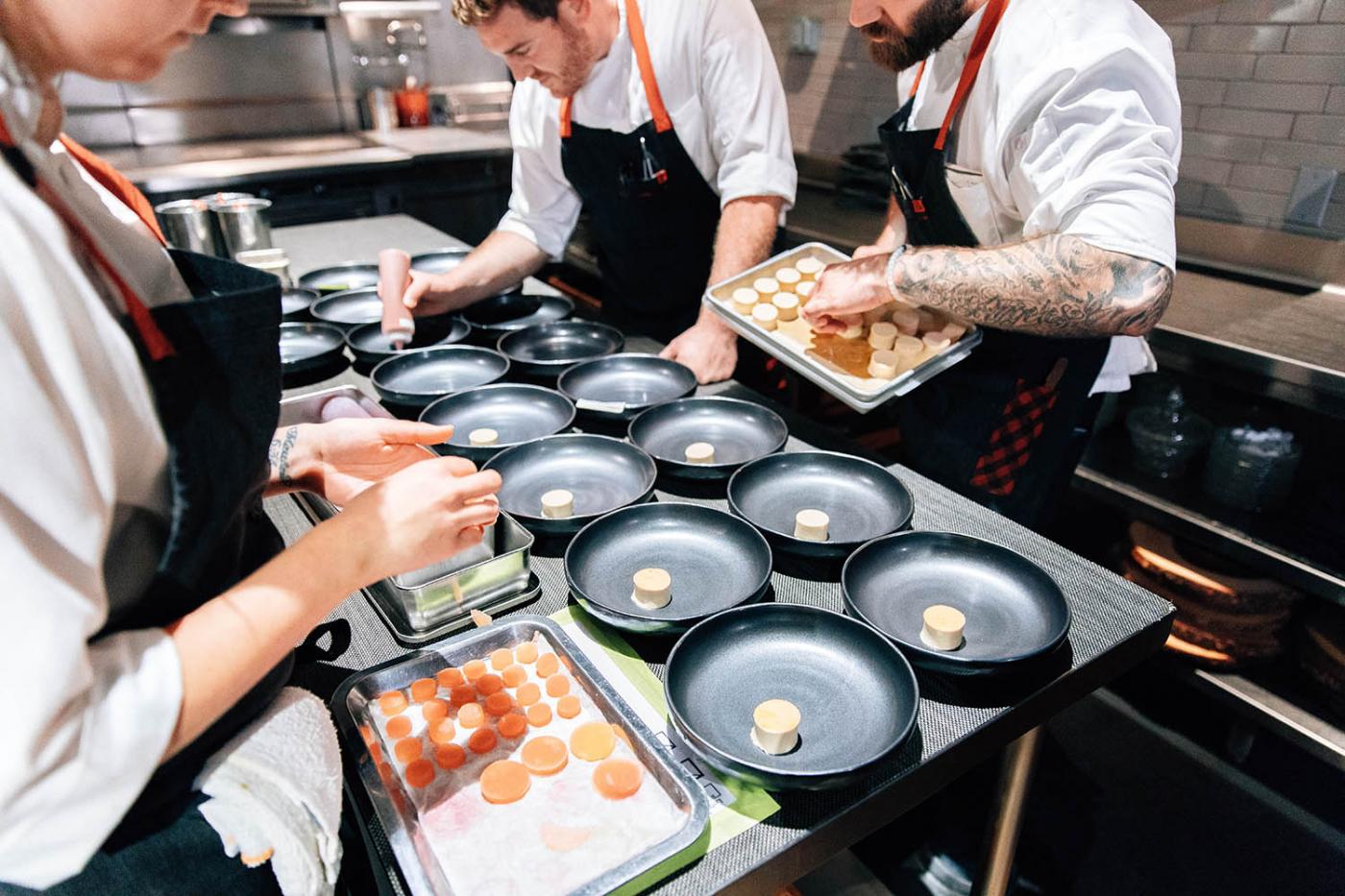 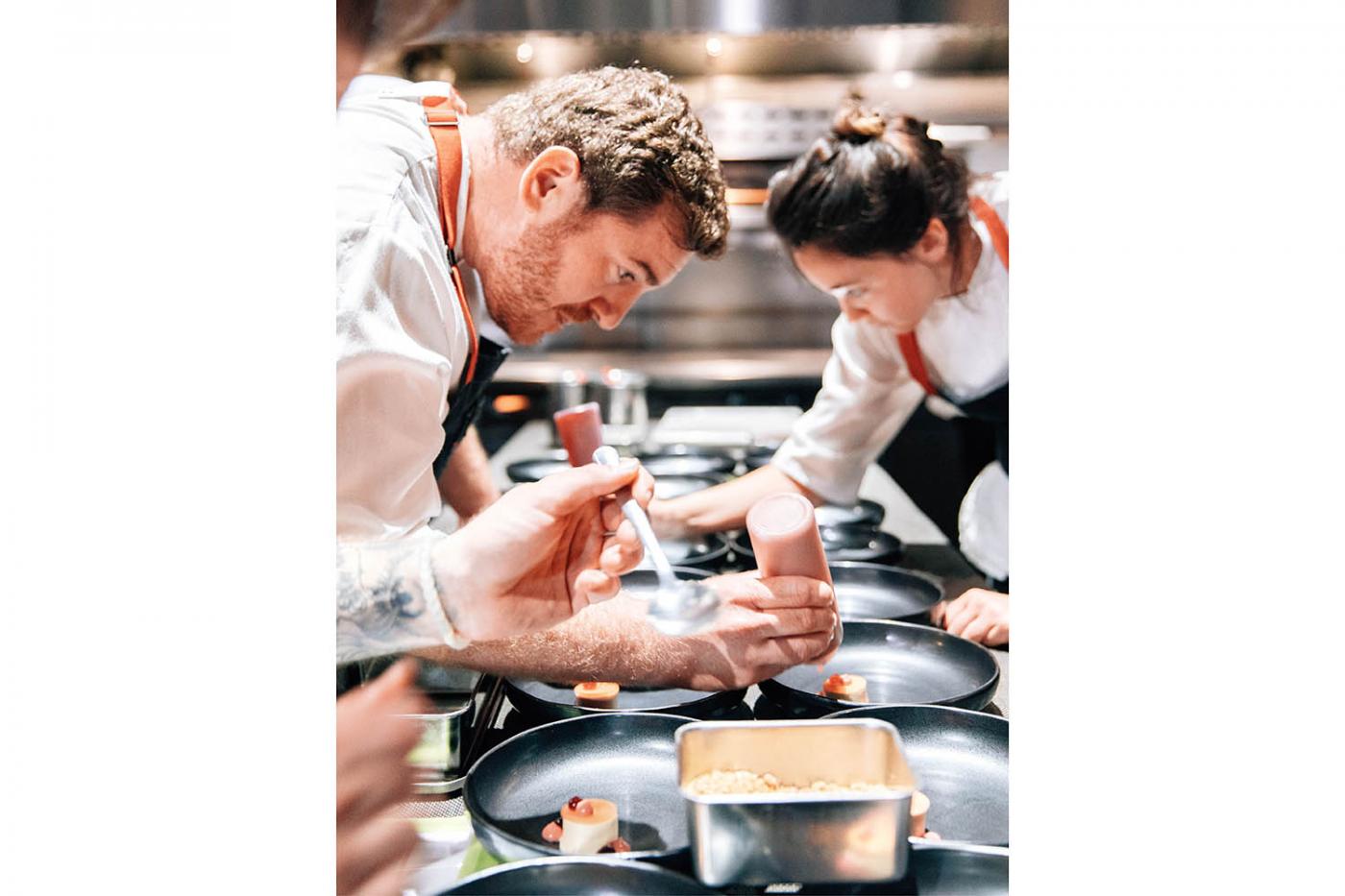 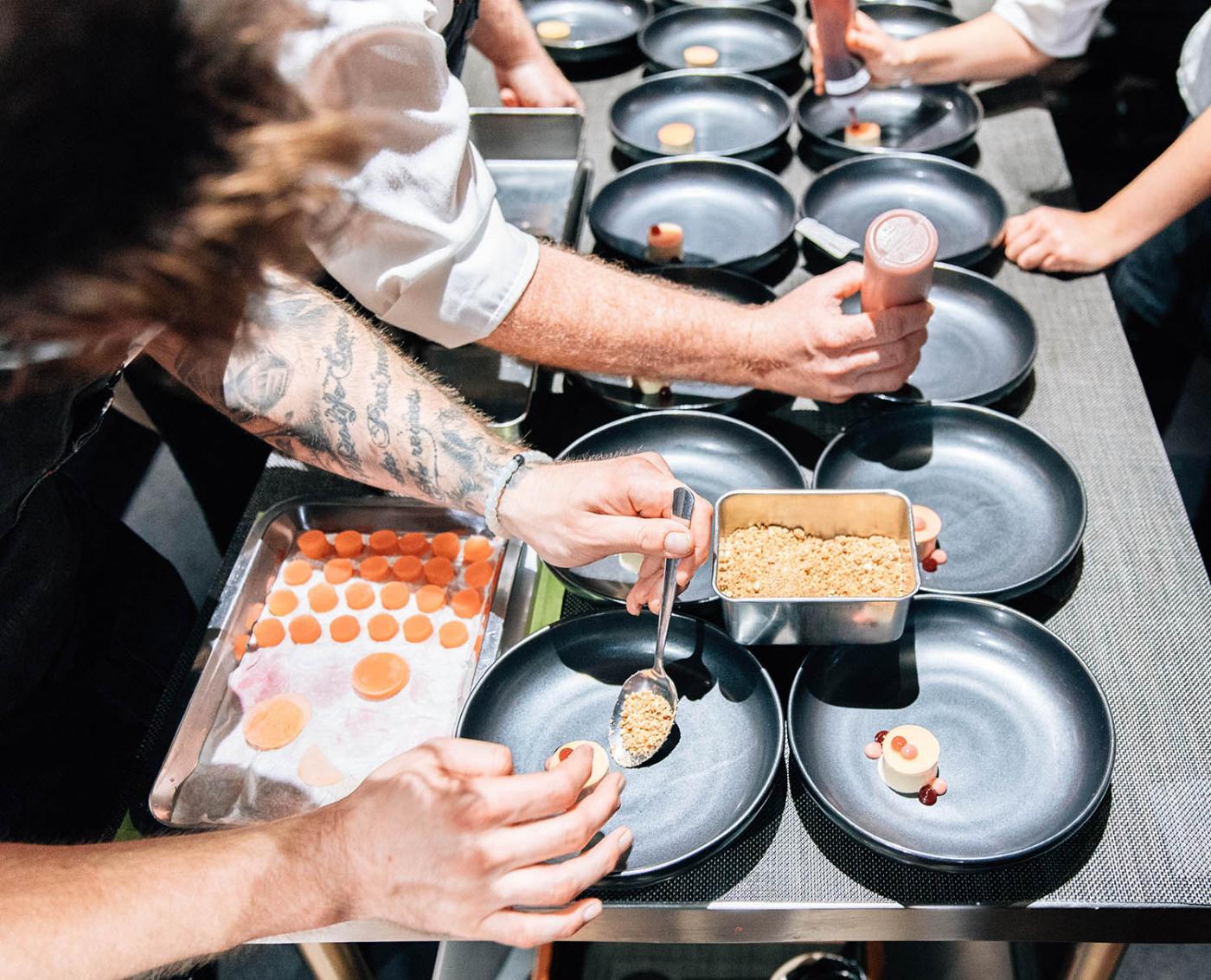 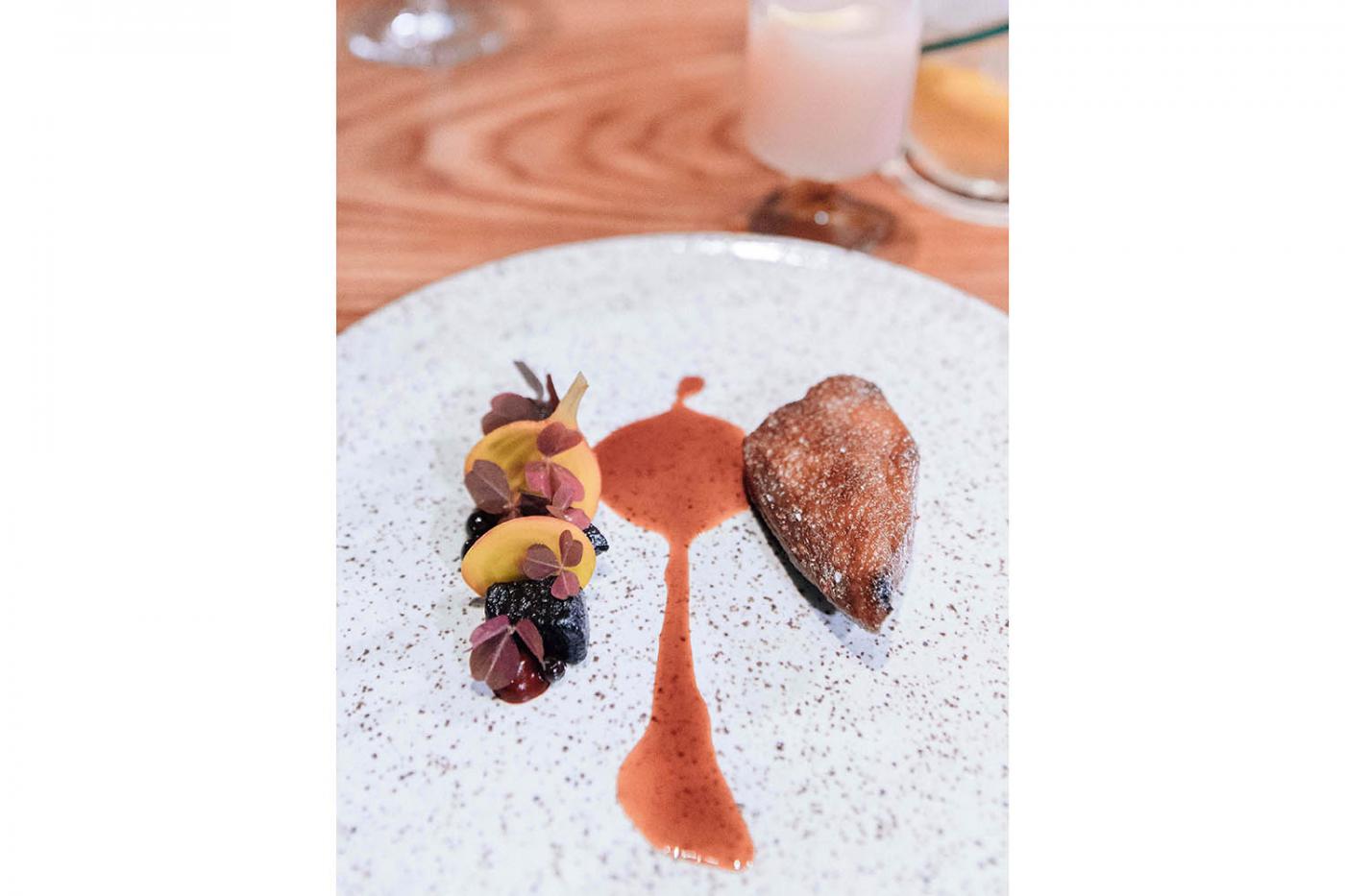 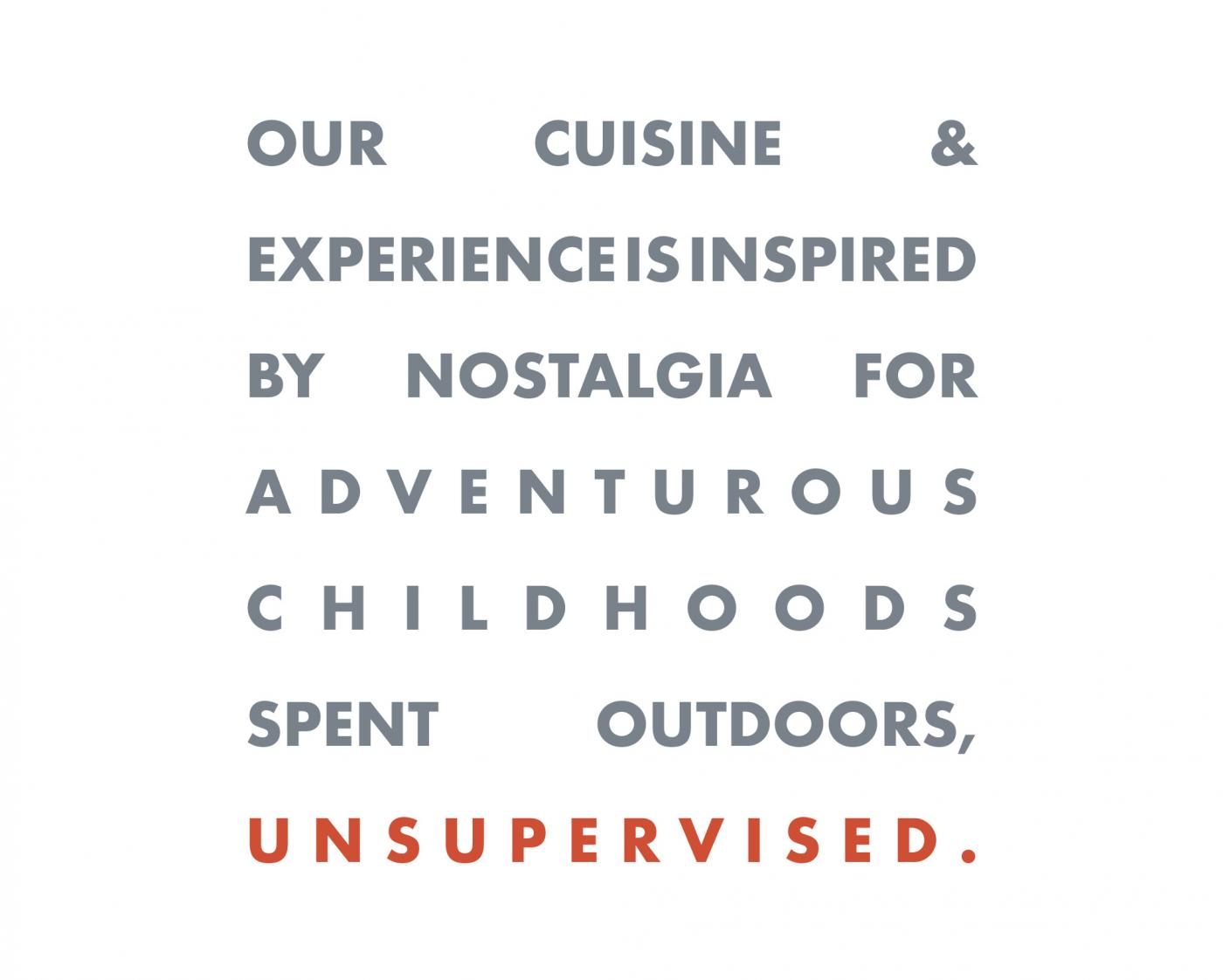 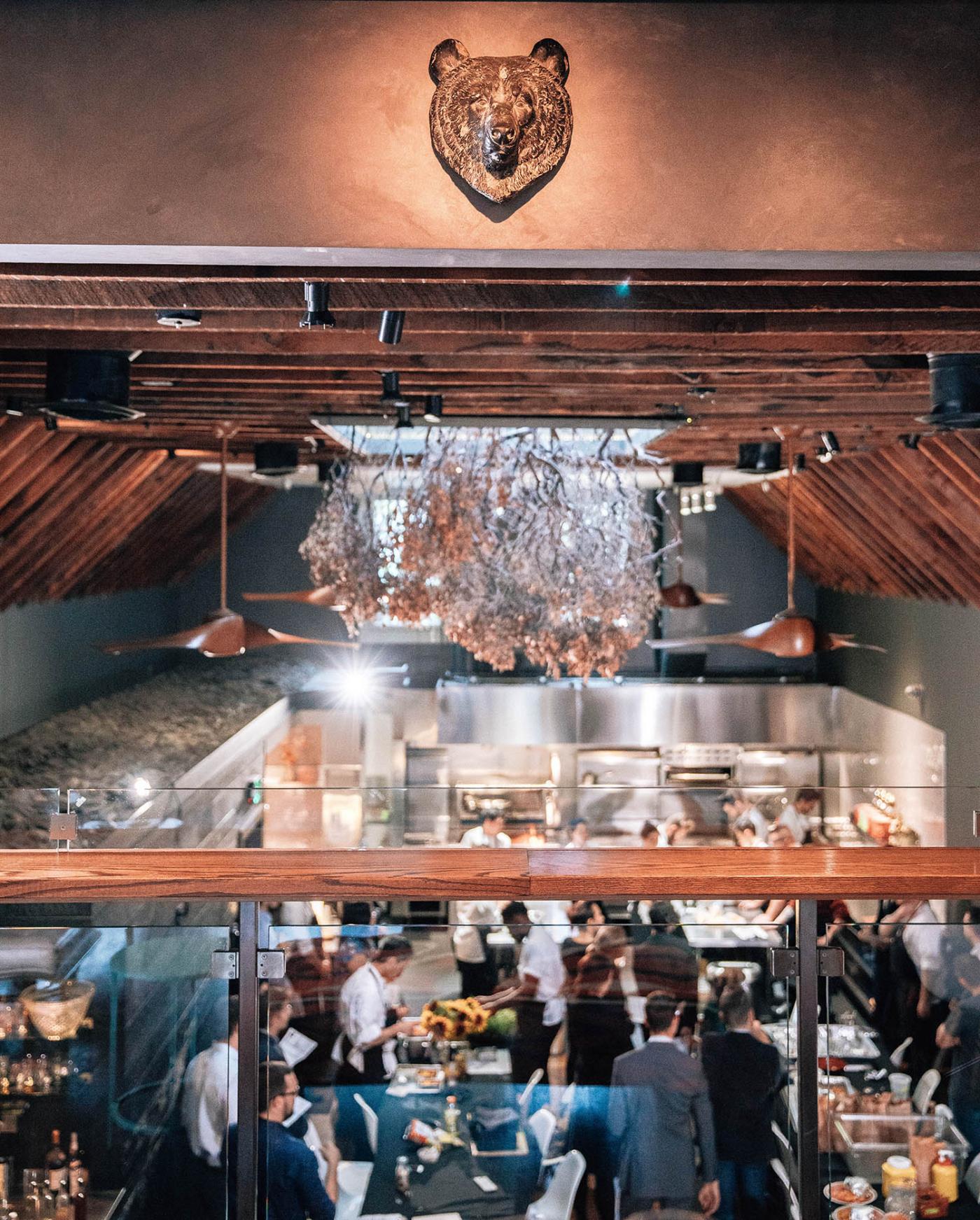 Once in the dining room- an elemental space with two long tree tables, charred Shou Sugi Ban Japanese cedar planks and an almost lifesize mural of Yosemite Valley by iconic San Francisco artist Amos Goldbaum- we were greeted with a slate of the most sublime bread and homemade butter, a “Field Guide” notebook in lieu of a menu and a cleverly inscribed golf pencil to document the culinary adventure ahead.

As each of the 10+ courses seemingly magically appeared on the table, the chef behind each masterpiece emerged to give story behind each plate. Our favorite story? One of Lazy Bear’s own team members slips on a wetsuit and free dives off the Northern California coast to forage for seaweed for their signature dishes (so extra)! 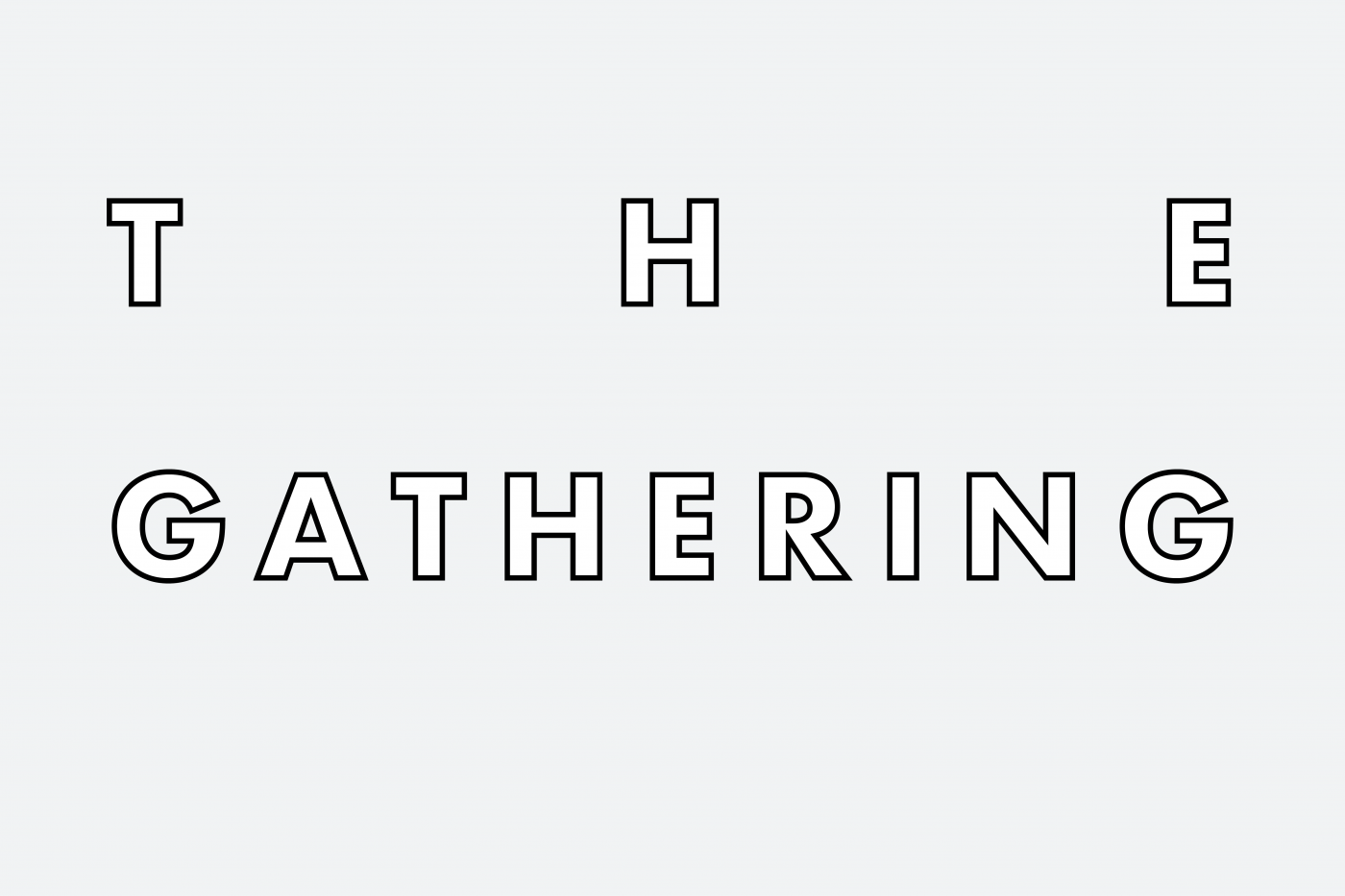 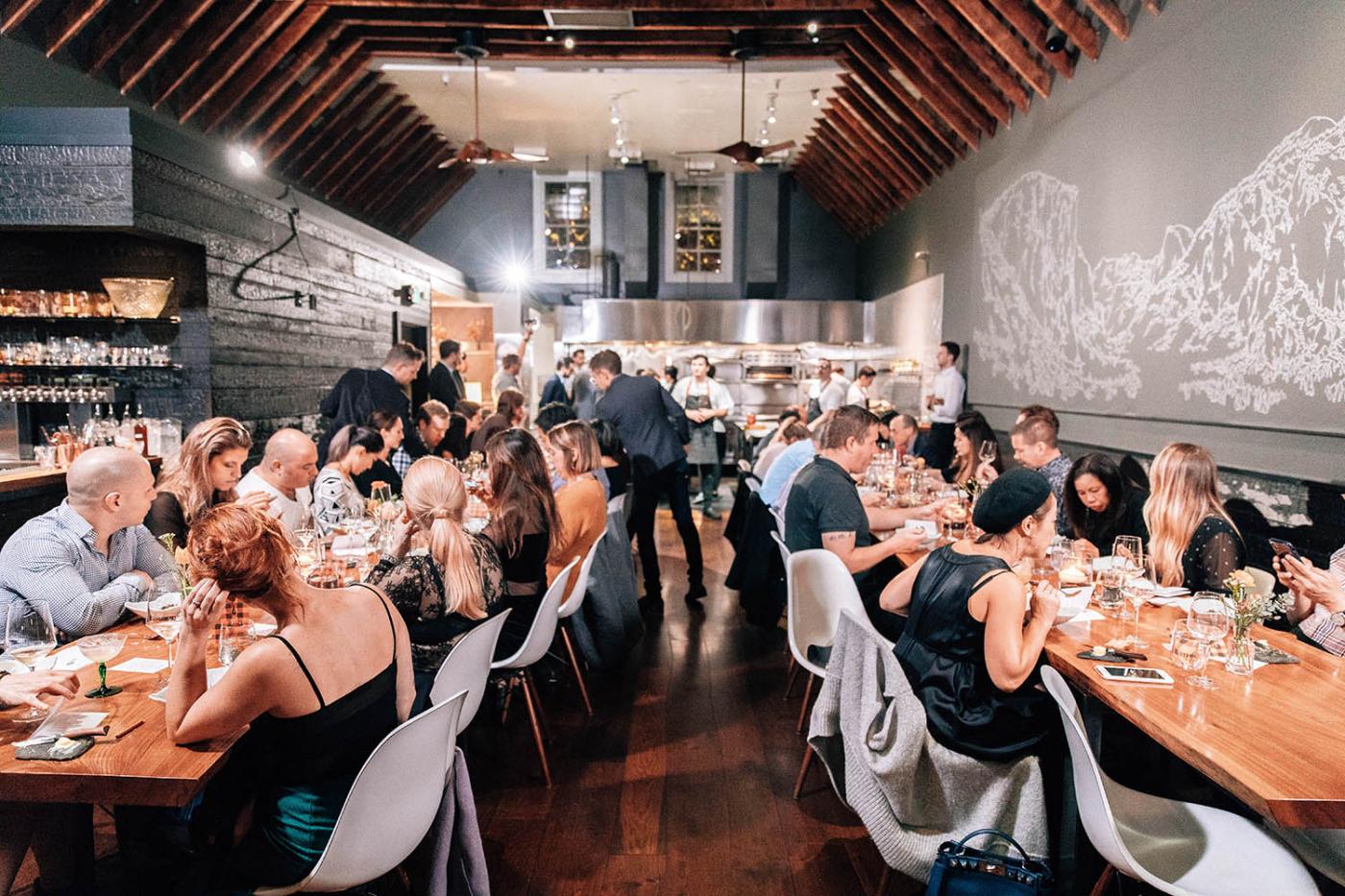 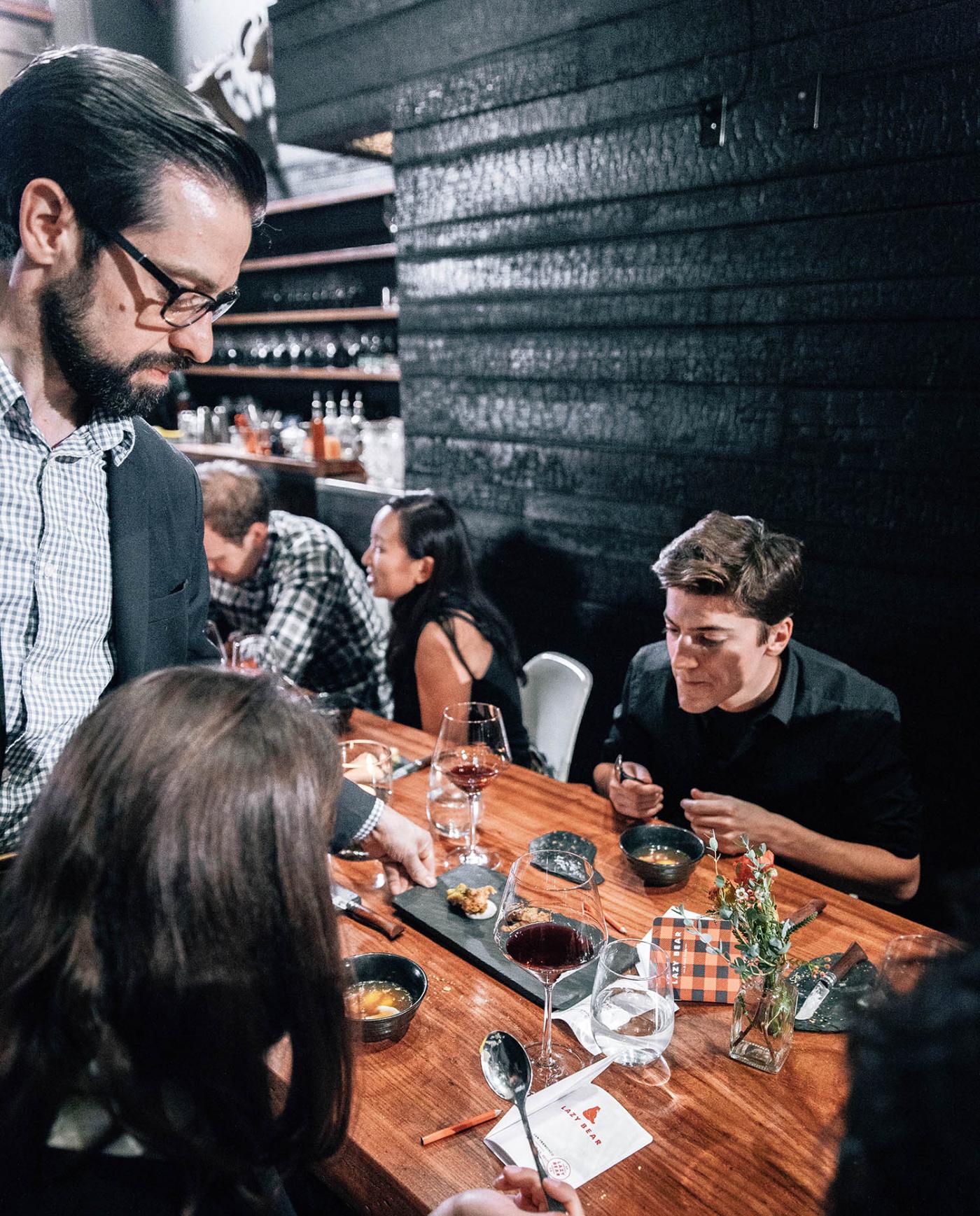 What has evolved the most over the years of hosting your dinner parties?

David: We’re embracing the wild; everything from foraging, to natural tablescapes and wild flavors is written all over the experience.


How have you convinced people of the concept of a dinner party with strangers?

David: It hasn’t been difficult to get diners onboard with this concept. In a way, we lucked into something that people really wanted. We did discover that at the very beginning we had to do a little handholding. People would arrive expecting a regular restaurant experience so we had to give people information when they showed up so that they knew what to expect. There are a lot of things about San Francisco and about the time period in which Lazy Bear started that made it possible. People here have a great willingness to experiment and try new concepts; people are open-minded.

Matt: I have a first day of camp theory for all our guests that come in. Some people are like “Bye Mom and Dad! I’m ready to do this.” Others take a few hours and some a few weeks to get used to the new summer camp experience. There’s a sort of healthy peer pressure to have fun and engage with the people next to you.

Kelly: We’ve lost that ability to just talk to strangers comfortably- we can feel fairly uncomfortable doing that because we don’t do it very often. But, when you get some food in you (and maybe a little alcohol) those doors start to open and you open people up to an experience that inside they are actually longing for and they get really excited about. 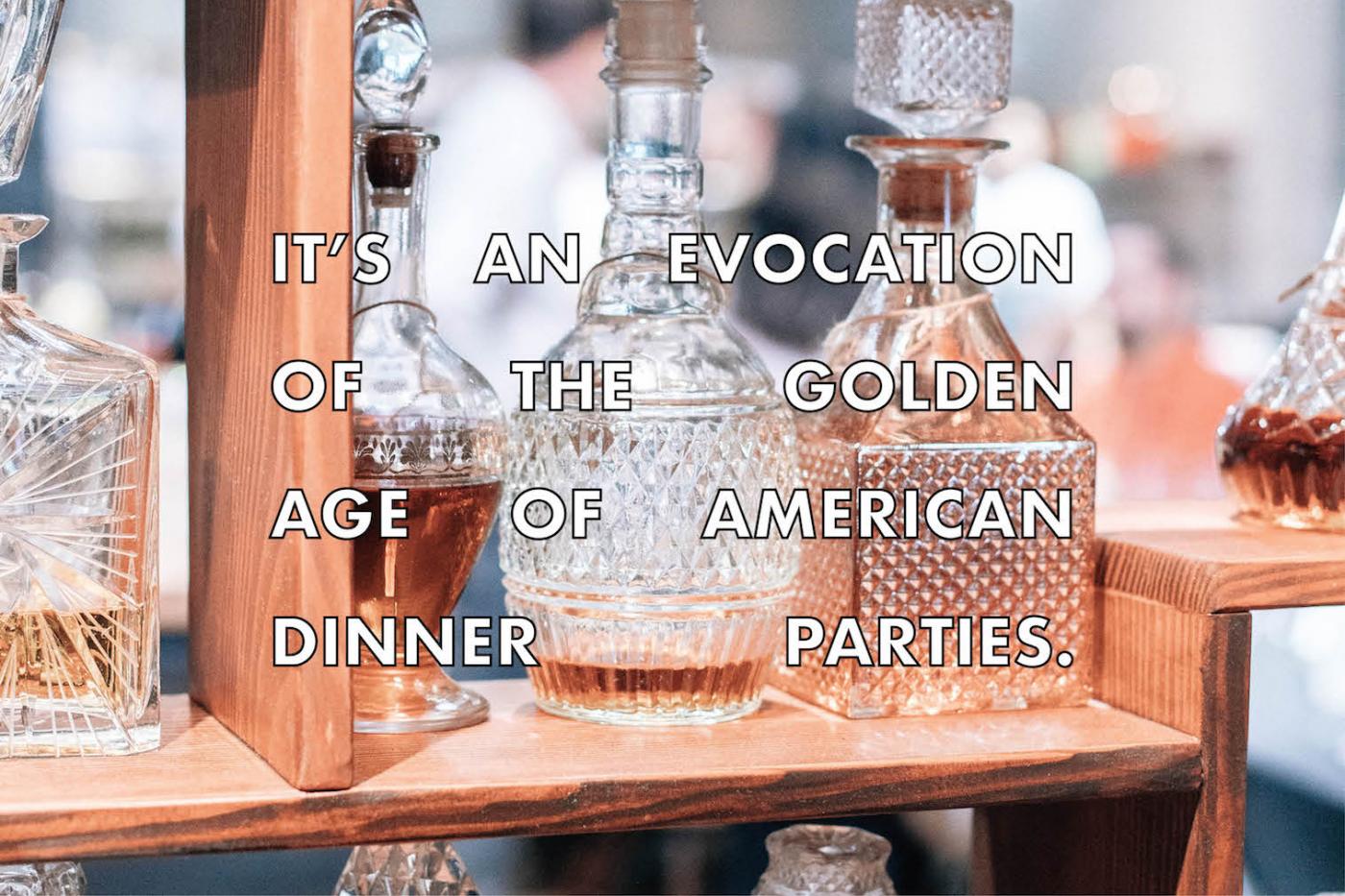 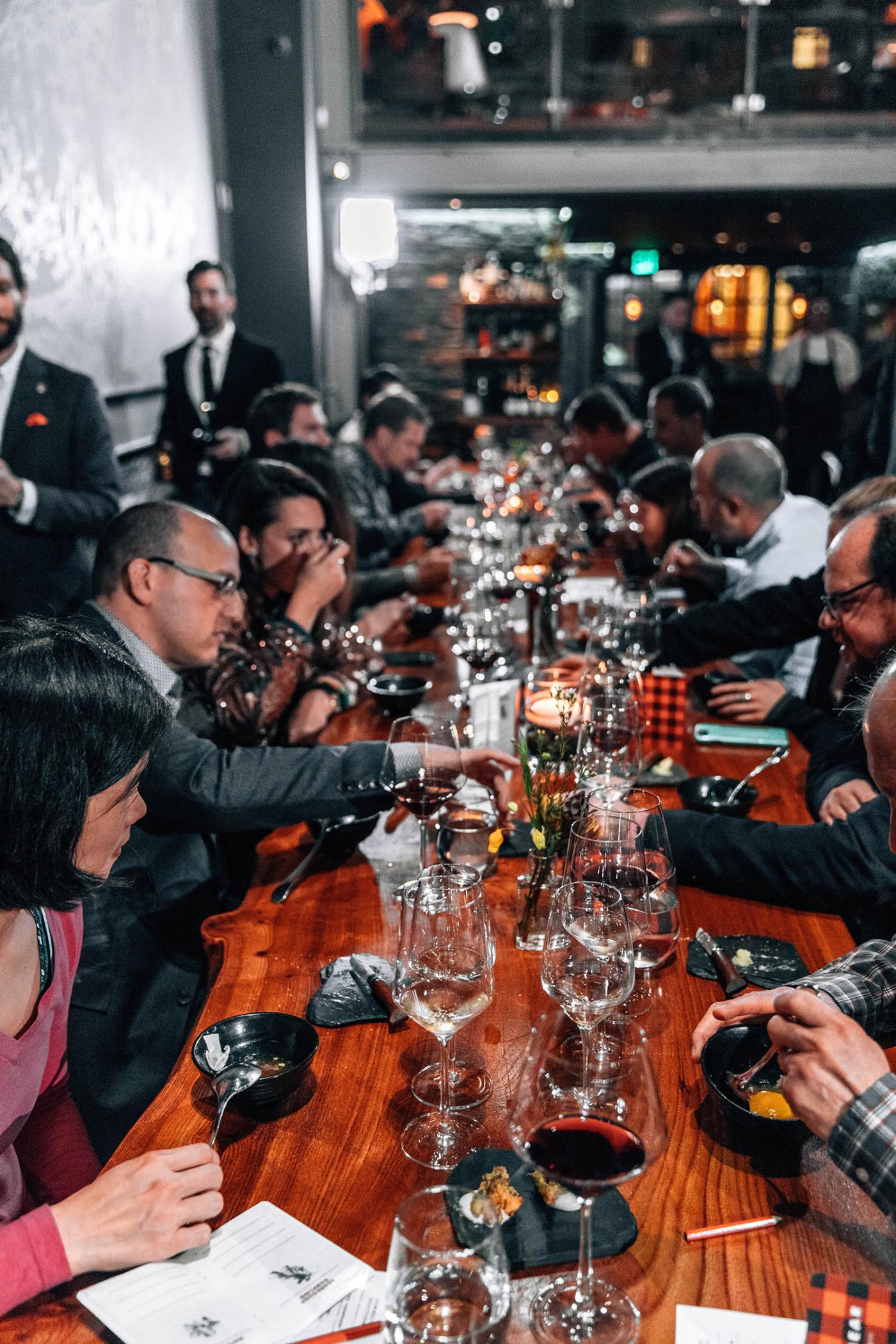 Why is Lazy Bear great for group gatherings?

David: We are hosts of a dinner party and we are here to facilitate guests having a great experience. We’re really awesome for events because it’s what we do every night we always serve a lot of people all at once. Not only is it a party, it’s what we do all the time!

Anna: To see a dinner party being executed into a full on restaurant service is amazing!


Bringing strangers together night after night, there are bound to be some interesting moments. Can you share a few?

Matt: We’ve had moments when the kitchen will start singing along to a song which then spreads to the dining room. People have a shared nostalgia which is a big theme here.

David: You know, there have actually been two couples that have met here and gotten married.

Nick: I don’t want to say too much because they might read this article. 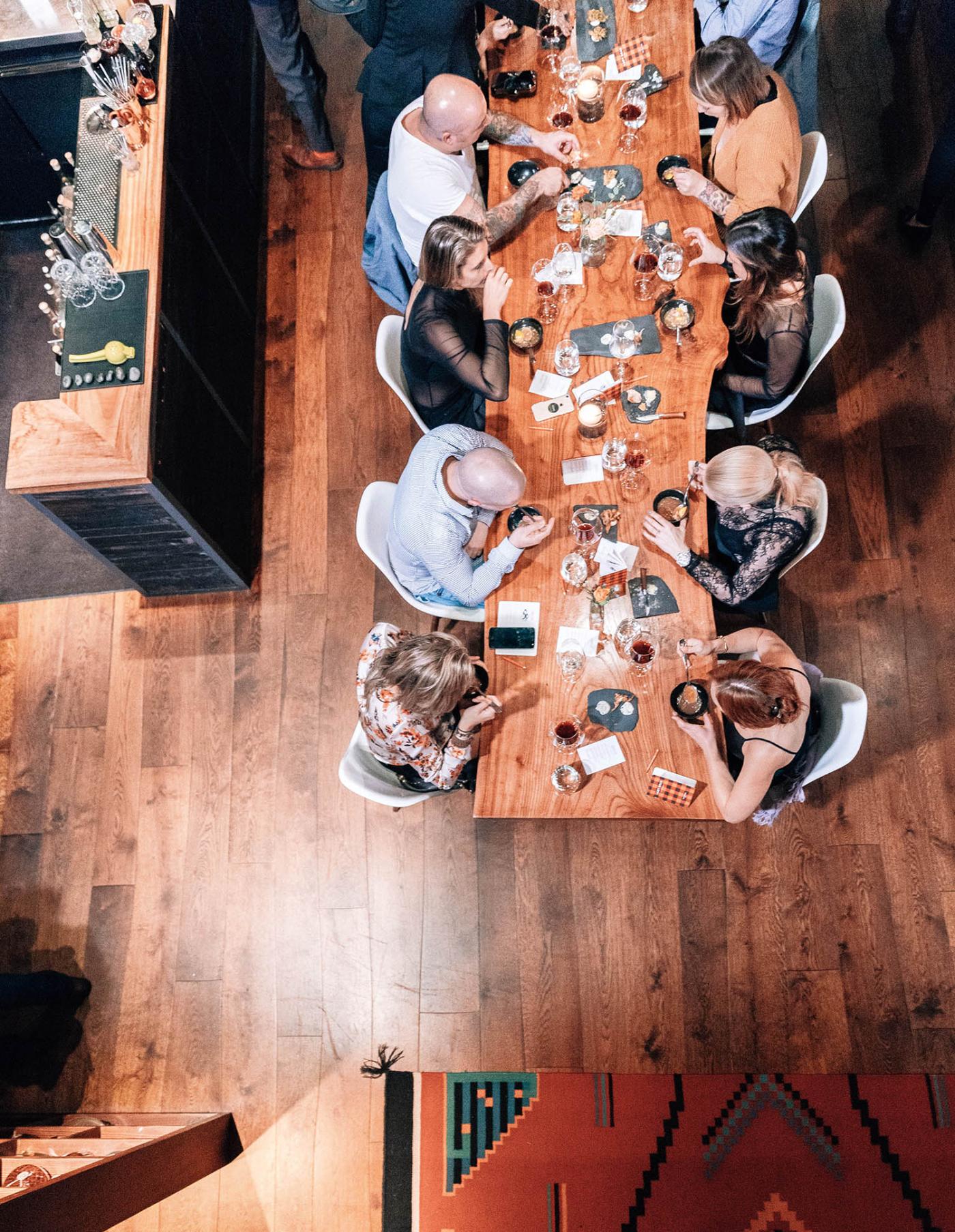 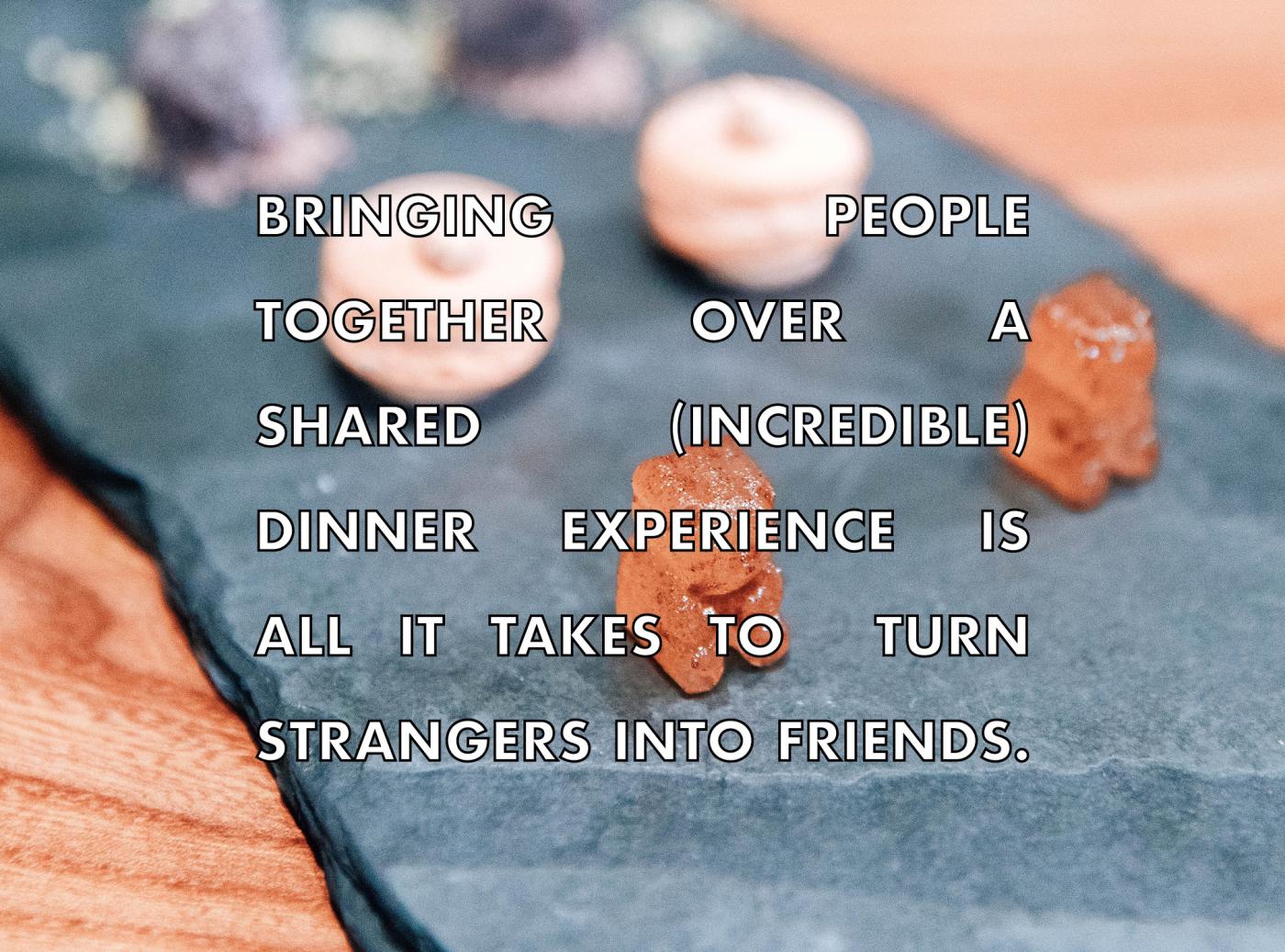 By the time our final dessert courses rolled out (yes, there were multiple courses of dessert!), we were laughing and cheersing with our fellow dinner mates as if we had planned to be at dinner together all along.

In an era of individuality, community can feel like a novel concept; Lazy Bear is proving that bringing people together over a shared (incredible) dinner experience is just the spark needed to turn strangers into friends.


Photography by Cándida Wohlgemuth for The Venue Report

Okay, We Have Serious Style Envy of This San Diego Dinner Party

The Simple, Refreshing Cocktail Every Summer Party Needs (Prep it Ahead of Time!)