For Michael Antonia the hustle has never stopped. He was the kid who mowed every lawn, shoveled every driveway and rode three paper routes. He was the teenager who built bikes out of junkyard parts and sold them to his peers, the wunderkind who started DJ-ing by night while booking and producing shows in night clubs, theaters, and festivals by day. He was also the college graduate who was swept up in the energetic orbit of Alex Calderwood, founder of Ace Hotels, a collaboration which would launch him into the design world. What is now years ago, this young father-to-be started an event production company from his dining room table during a recession and over the next few years, cultivated it to become "The Flashdance," one of the most highly regarded brands in the wedding and event industry. Even in the midst of success, Michael continued to see holes in the industry, such as the downright awful furniture at the events he produced. Naturally, he launched YEAH! Rentals in 2011 to runaway success followed by the retail counterpart, YEAH! Furniture, where thousands of hours of rigorous testing by way of weddings and parties helped him refine each design. 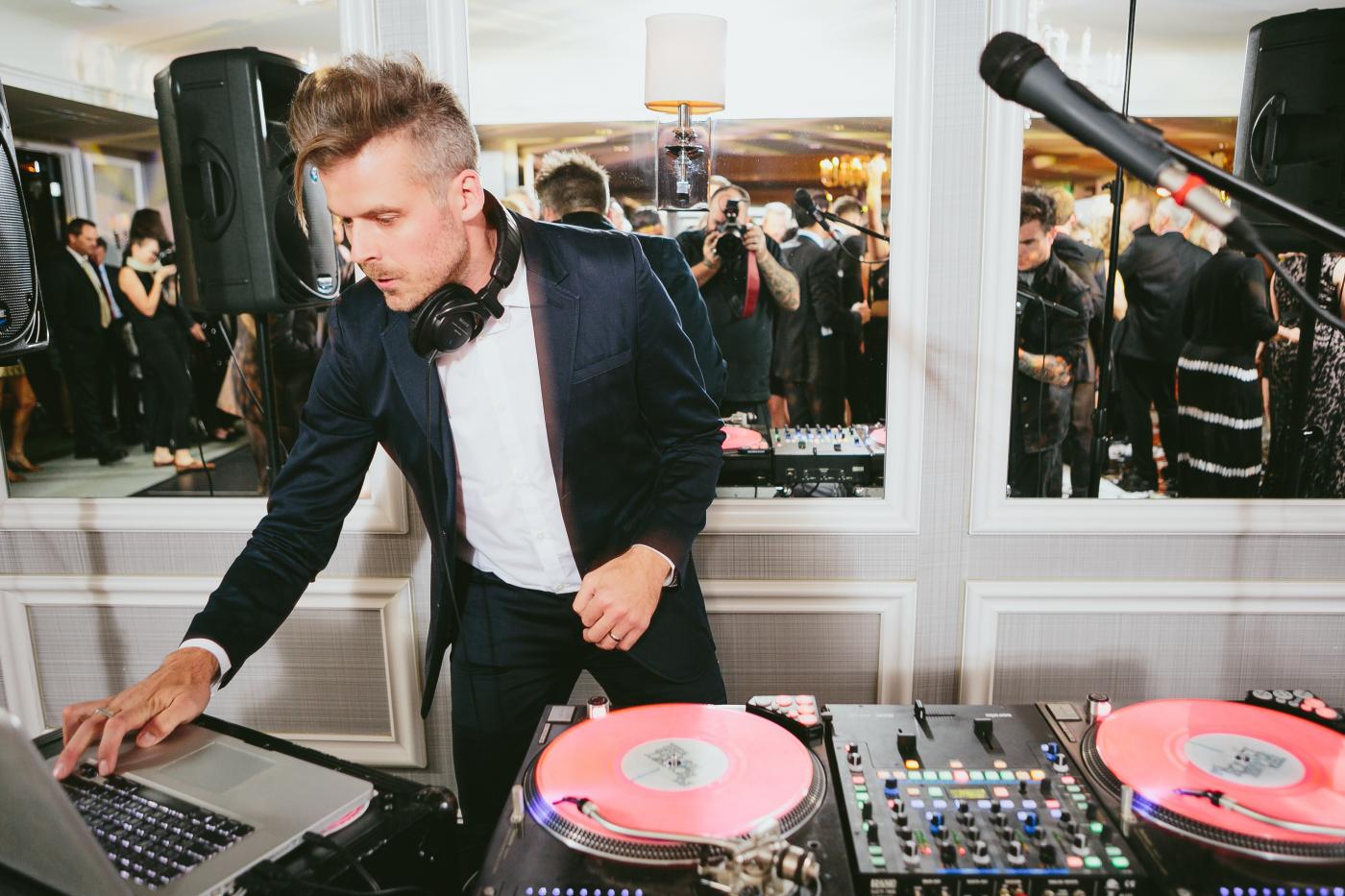 The Flashdance is a creative collaboration whose disparate elements complement each other to form new approaches previously unheard of. Antonia oversees it all as the formidable godfather figure who pushes his collaborators to increase their notion of "best" by five notches, yet maintains an effortless candor in his relationships and a spring in his step as he dashes from project to project.

The Flashdance now houses 6 companies and covers nearly every aspect of event production, whether it be furniture and props from YEAH! Rentals, photo/video/design from YEAH! Weddings, or a damn good Flashdance DJ. Antonia stays closely involved as the creative director and marketing expert while also finding time to keep his DJ-ing as sharp as ever and getting his music fix at the same time by working as the music supervisor for the Ace Hotel. Antonia has been featured in Paper Magazine, NPR Marketplace, Reverie Magazine, Apartment Therapy, Remodelista, Herman Miller's blog, Refinery 29, 100 Layer Cake and Martha Stewart Weddings and has made appearances on E! & Bravo, to name a few. While this mastermind does it all, he still has room for one more passion project. Keep reading for more on Office Space, Los Angeles' newest venue by this creative genius.

Hey Micheal! Tell us how you got into DJing.

I mowed lawns in the summer, shoveled driveways in the winter, ever industrious! I took that money and bought records, thousands and thousands of records. I've always been an obsessive music collector. Soon after college I learned that I could make money playing records and I never looked back, but that wasn’t enough, I also produced dance nights, parties, concerts, small corporate events and later graduated to producing multi-million dollar marketing initiatives for fortune 500 companies. In those days I DJ'd a lot. Sometimes up to 4-5 days a week for corporate stuff AND 4-5 nights a week in clubs. I was lucky enough to play with everyone from Pearl Jam and Grandmaster Flash to Daft Punk and Diplo, but it wasn’t all champagne with amazing artists, I was grinding it out on the club/festival circuit for five years in New York and five years before that in Seattle. In that time, I was surrounded by drug addled club owners, back stabbing "colleagues", and audiences who thought way more of radio pop than they did of the craft of being a turntablist. Plus, the money and hours were terrible. Instead of making another slight course correction to navigate my life into tolerable waters, I just crashed the ship and swam away.

I never meant to be a wedding DJ, I fought pretty hard against it in the beginning. But as it turns out i’m pretty good at it. In 2007, I moved to L.A. without knowing a soul, during the worst financial crisis in recorded history, my wife was pregnant and I needed a job so I applied my experiences and talent to possibly the most undesirable (to me at that time) career ever, turns out that it was the best decision I ever made. I saw a wide open lane in the wedding industry, wedding DJs were (mostly) dorks who said stupid shit on the mic, wore terrible suits, and played the world’s worst music ever, or they were real DJs too ashamed to actually advertise that they were, in fact, wedding DJs. So I set out to change people’s perspective and bring something fresh to it.

Even though I went into it kicking and screaming, I found that the wedding/event industry employs some of the most talented, funny, creative, sharp, and most importantly NICEST people I have ever met! Before I knew this, I built my own new professional network by pulling from my past lives in events, film, marketing and advertising. So from the start we were marketing to professionals and artists from outside the wedding world. From the beginning we have strived to make something funny, something authentic, something against the grain, but first and foremost, something FUN! We have been fortunate enough to find like minded artists to collaborate with who are ambitious and creatively adventurous many of whom are repped on this website, so I feel truly honored just to be a part of it all.

I can’t really say enough about how many ways this industry continues to change my perspective and my life, not to mention how gratifying the experience of bringing some of my people up from frustrated artists to successful entrepreneurs has been. By joining this diverse community of professionals in the wedding world, I am surrounded by extremely talented, warm, people who have amazing families, who are down to help and collaborate, who are genuinely excited about life, who like to have a really good time, who I count among my closest friends.

It still makes me feel funny to say I am a wedding DJ at a dinner party, but it makes me feel pretty awesome to say that I started five companies because of it, and that I work with my best friends, and make people TRULY happy every weekend. It makes me feel insanely good about myself to set that example for my kids. I can’t even express how blessed I feel that my wife can be with our children in the day (and not at some miserable corp job) and we are all together at least 5-6 evenings a week. All this while I make a living creating art that I am incredibly proud of, and to have the support of my peers and fans that are so open minded.

I would have never chosen this career, but I’m so grateful it chose me.

Is DJing how you got into the event/venue world? Tell us about that journey.

Yes it is, I realized in college that you could get paid to play records in public and I have never looked back. I started in small lounges, bars, restaurants, happy hours, wherever would have me. After awhile I got pretty good at it, grew an audience, graduated into small clubs and then eventually bigger clubs, festivals, and touring. I was lucky enough to play alongside many of my biggest heroes like Diplo, Outkast, Fatboy Slim, DJ’s are not Rockstars, Daft Punk, Z-Trip, DJ P, 2 Many Djs, Swamp, Grandmaster Flash, Afrika Bambaataa, DJ Shadow, Cut Chemist, Andy Smith (Portishead), Thievery Corporation, Jazzanova, Bebel Gilberto, NERD, Kelis, Eddie Veder (with Queens of The Stoneage), Groove Armada, Felix Da Housecat, The Rub DJs in intimate venues and at festivals in front of 10’s of thousands of people. After awhile, I realized that quality of life was more important than being “cool”. Right around then I started The Flashdance and have spent pretty much every day since trying to have a high quality of life and maintain an element of cool… Some of the ways I have been able to do that is to keep growing, changing, adding layers, collaborating, taking risks, and trying new things. That lead me to YEAH! Rentals, YEAH! Furniture, YEAH! Weddings, and now Office Party. The result has been very rewarding and it keeps me really busy.

Any advice for entrepreneurs wanting to start a career in the venue world? What should they expect when opening a venue space?​

Below is an example of what we offer at YEAH! Rentals! 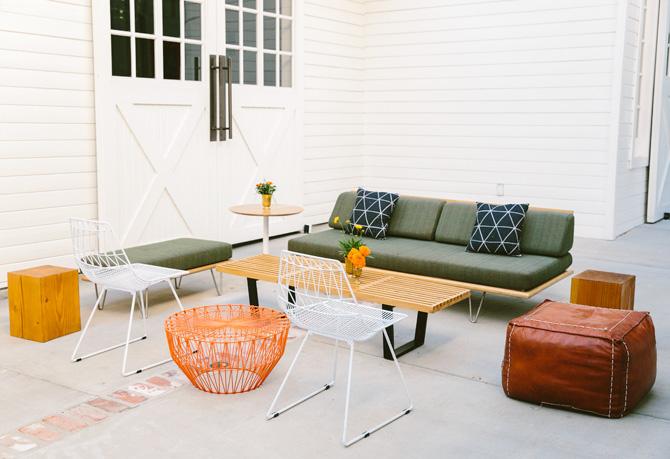 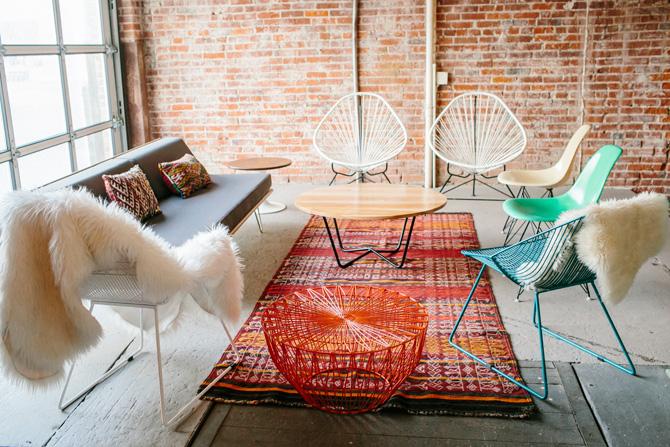 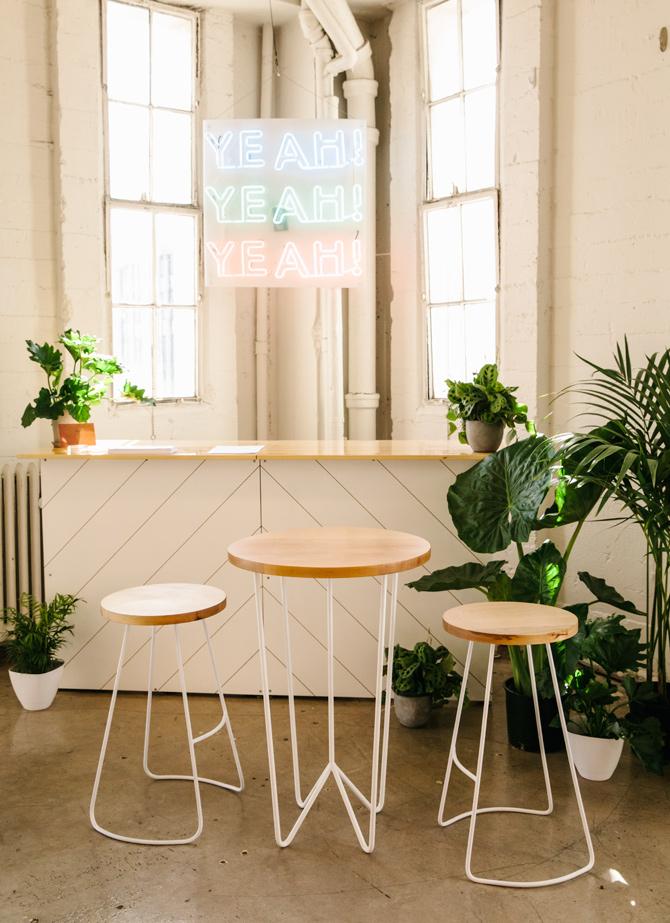 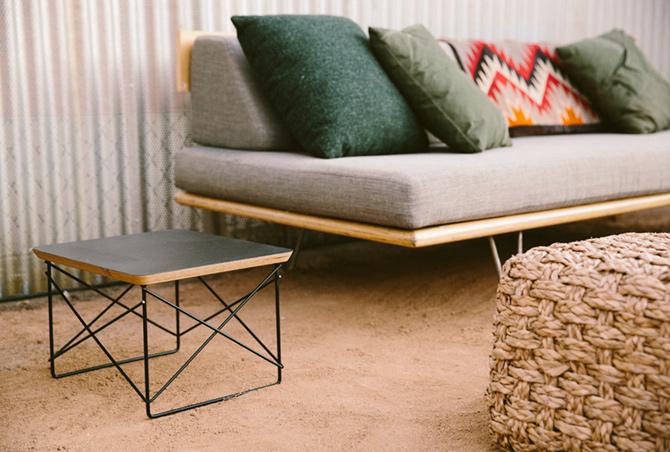 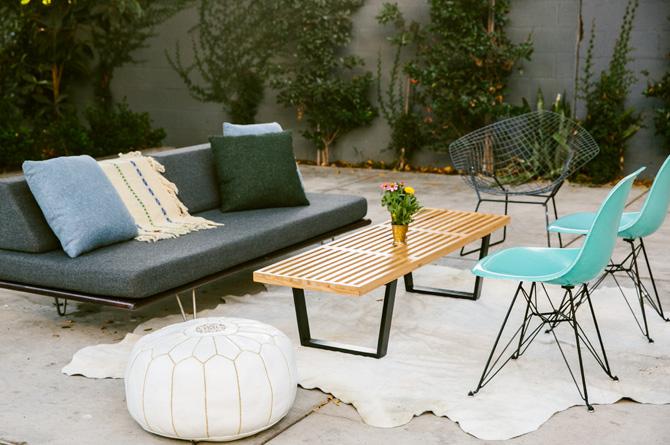 What is a quote you look to when times get tough?

Whether you think you can, or think you can't... You're right.  -Henry Ford
You are whatever you pretend to be. -Kurt Vonnegut

December 14th, 2008 & October 30th, 2012 - The dates that my 2 beautiful little girls were born. But what I think you mean is proudest business moment and that would definitely be April 12th, 2017. I was speaking at a creative conference with my friend Brian Morrow of Sharkpig in Rome, and I flew my parents out (who have never been out of the country) to see us talk, and me DJ for a few hundred creatives from all over the world in my favorite city. My parents never really knew what I did for a living until they saw that. It filled me with great pride.


Tell us about your upcoming projects and openings!

This summer I have a long overdue launch. I have collaborated with my friends from Sharkpig and we are opening a showroom for YEAH! Rentals & YEAH! Furniture, a shoot space/production studio as well as offices and a private event space. I have been working on this for over 7 years so it really feels like i’m about to be the first man on the moon. The space is called Office Party (https://www.officepartywebsite.com/), it is in Highland Park just 10 mins north of DTLA and it is going to be spectacular! 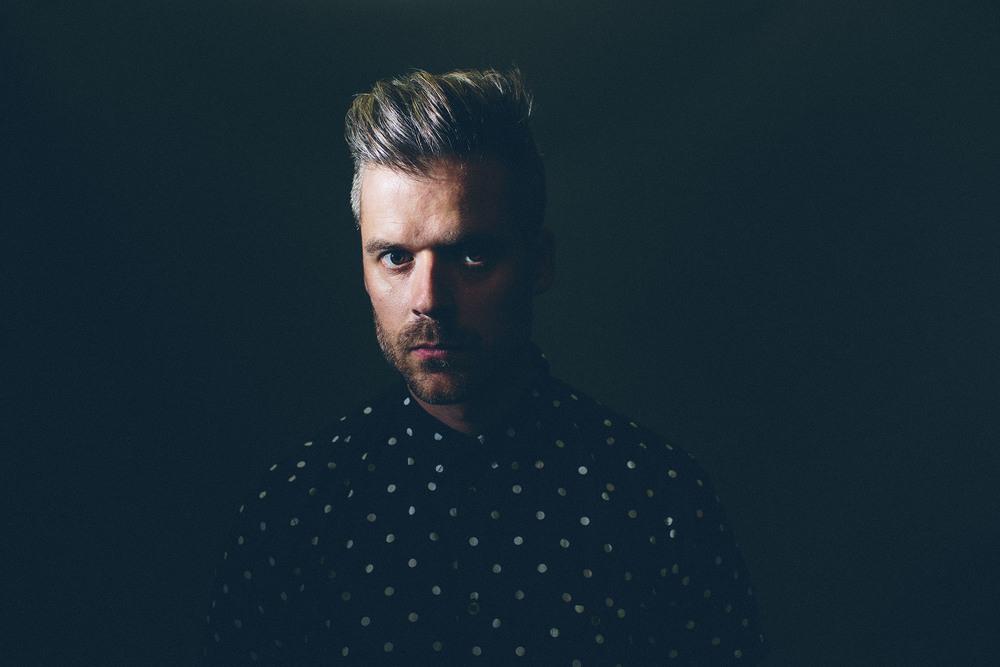 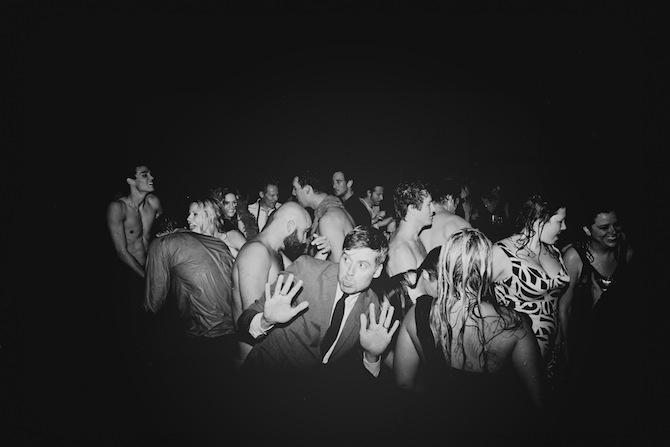 Birthday Bucket List of the Week: A Glamping Balloon Safari over the Serengeti

A Mother and Son Duo Open a Warm, Nostalgic Restaurant in Mexico City