"Some places stay with you forever. When wildlife photographer Nina and her Sebastian asked me to shoot their wedding in Masai Mara in Kenya, I didn’t know this land would touch me so deeply. It sung to me in a way I didn’t know possible, found new chords and played on strings I didn’t know I had inside me. The setting was like no other." - Jonas Peterson, photographer. 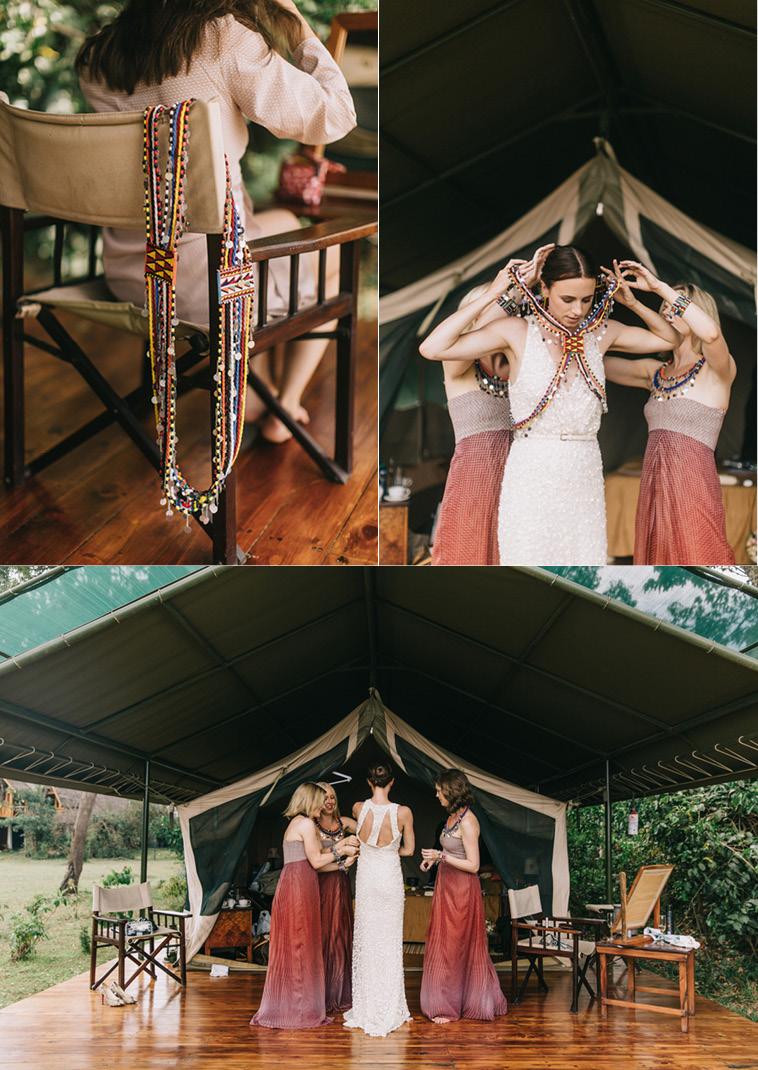 From The Bride, Nina

“The last couple of years I have spent many months in the Masai Mara following one pride of lions on my project about the world’s last wild lions. During this time I have become very close friends and almost family with the Maasai who have welcomed me into their lives. Therefore and because we were planning to hold our ceremony on the land of the Maasai it was very important to us to incorporate some of the traditions of the Maasai culture into the ceremony" 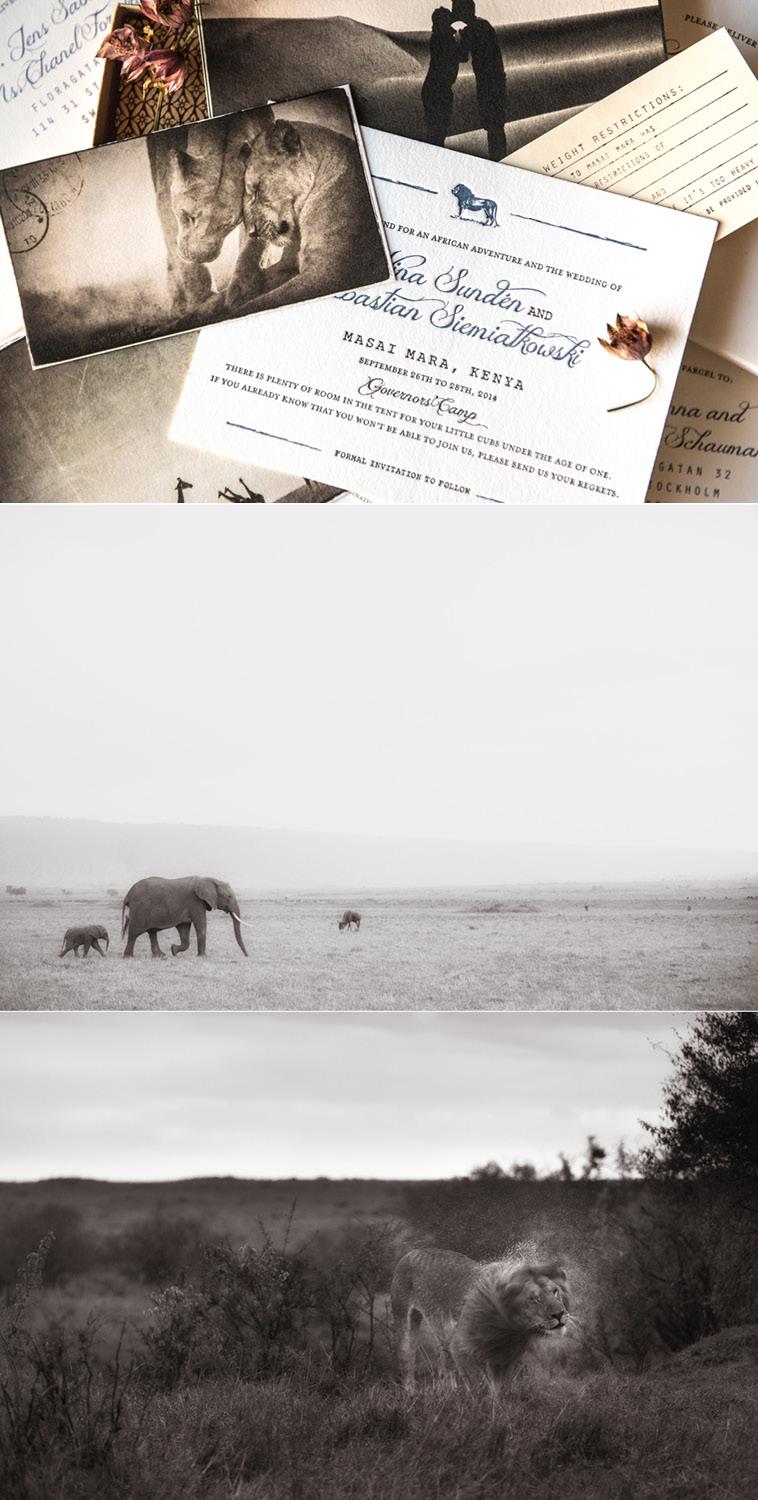 A Wedding Celebration and Lion Preservation

The area and venue were very special to Nina as she had been following this tribe of lions while working on her book project. She had spent endless nights and days photographing the lions with the help of the local Maasai tribe, so it held an immense significance for her.

Today there are roughly only 15.000-25.000 wild lions left in the world, which is a drastic drop from just some decades ago. Despite this drastic decline, Nina along with the leading big cat experts of the world are optimistic. She wanted to share her love of Kenya with her most beloved friends, so that they too would fall in love and want to contribute. In lieu of gifts the couple asked their friends and family to make a contribution to the leading big cat organization of the world – Panthera (Nina is their Senior Marketing Advisor).

In total all guests together made a significant contribution that will have an impact for the world’s last wild lions. How incredible that not only did they have a stunning wedding celebration, but that it also made a huge difference. 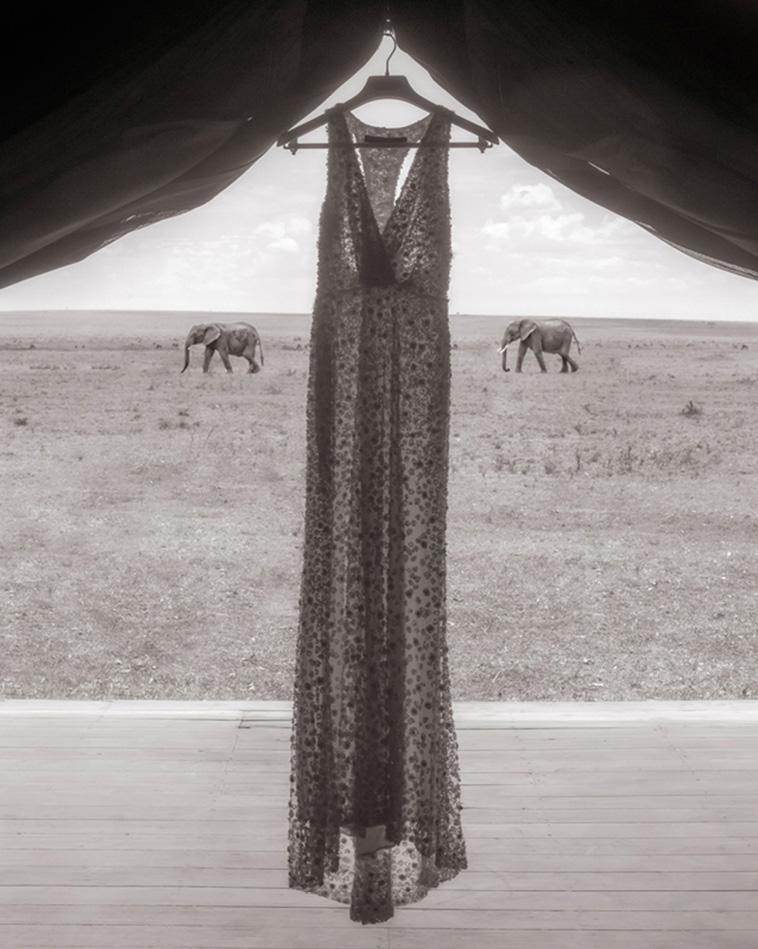 "The bride of the Maasai normally wear a lot of jewelry where the necklace, called enkarewa, is especially important. When I first told my closest friend in the Maasai community about our wedding early in 2014 he came back to me with a necklace and bracelets as a special gift made for me by his family." - Nina, The Bride 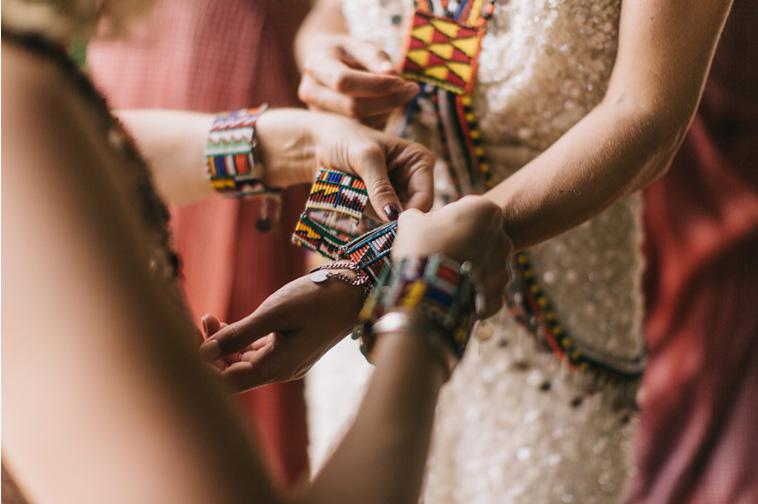 "The stick carried by Sebastian was also a gift from the local Maasai community. But even more generously my friend then offered to bring warriors from the Maasai community to the celebration. So in the end our two cultures and nature merged in the perfect moment and the best day of our lives.” said the bride. 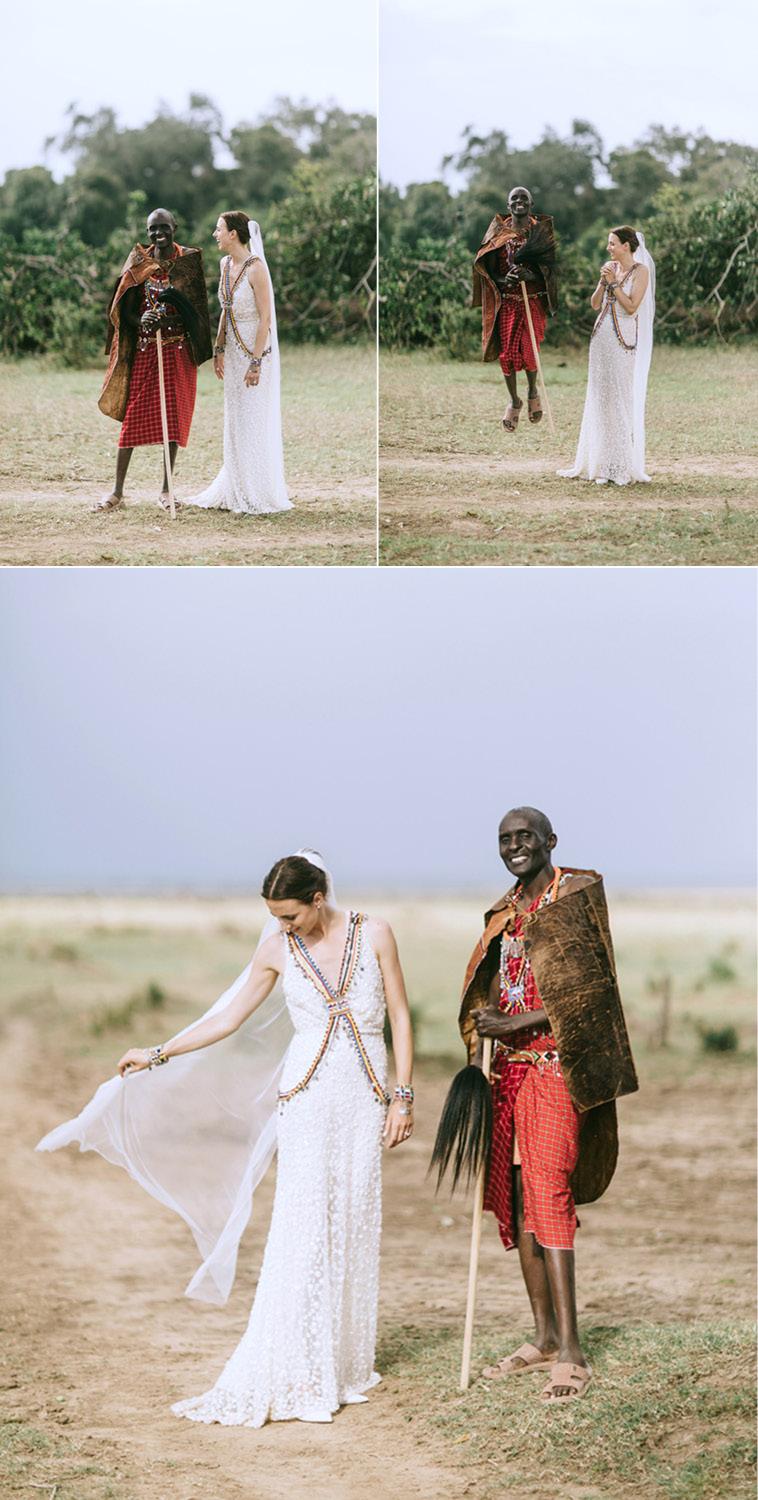 The bride and groom came to the ceremony in a safari land rover, the clouds were just starting to building up to an unusually dramatic storm, yet on the other side of the horizon, the sky was perfectly blue and the sun was shining. Most brides worst nightmare, but this nature loving couple took it as a good sign of mother nature was in full attendance at this communion of love. 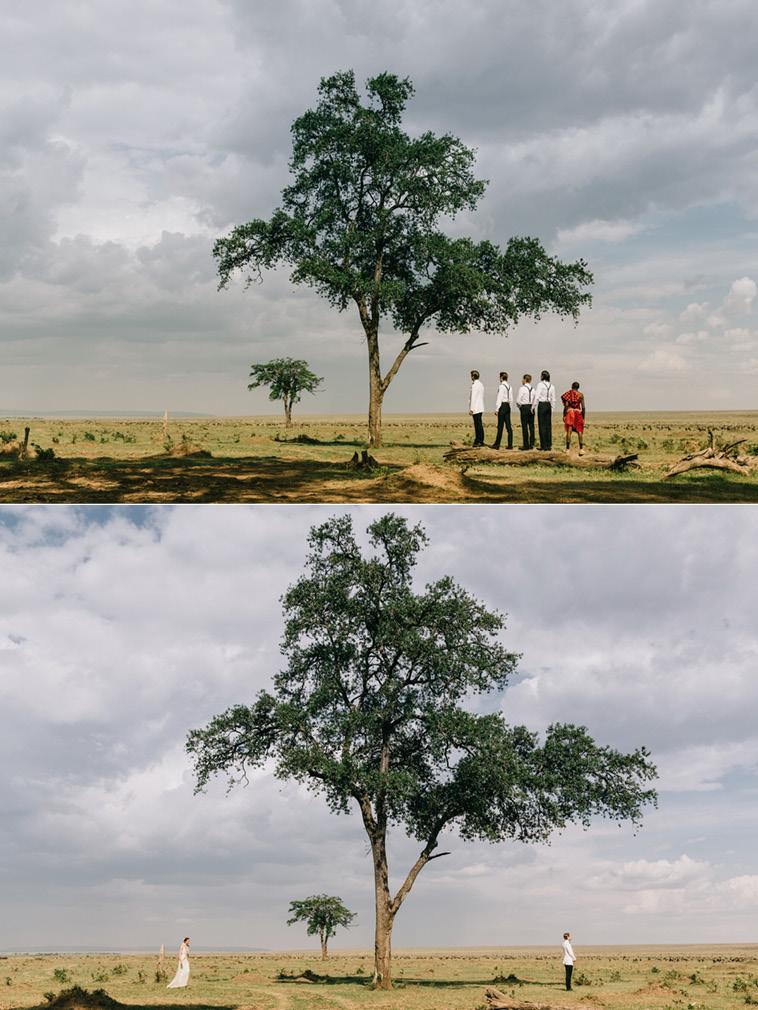 The ceremony took place on the middle of the savannah, on Maasai ground in Masai Mara, Kenya. The local Maasai tribe are friends of Nina’s and invited her to hold her ceremony on their land. They also insisted on doing an honour guard for her during the ceremony. 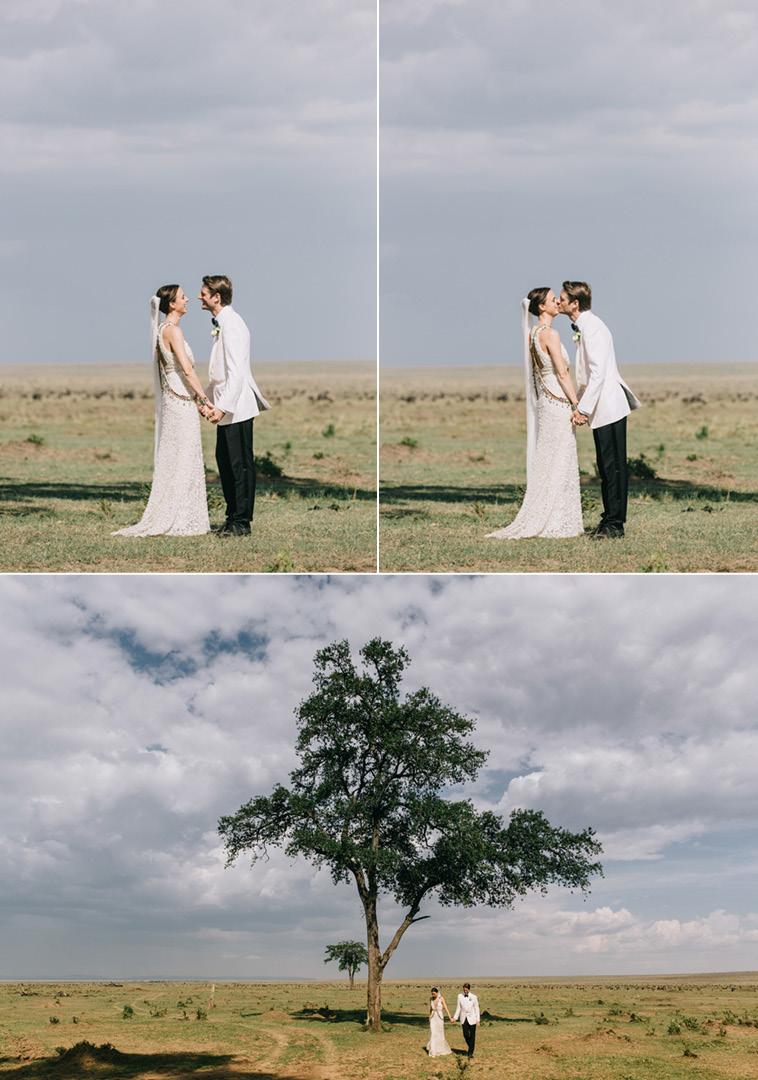 "The arch that was built is a traditional symbol of the entrance to a boma – the typical house construction of the Maasai, and after the announcement a traditional Maasai song and dance followed according to tradition" - Nina Bride 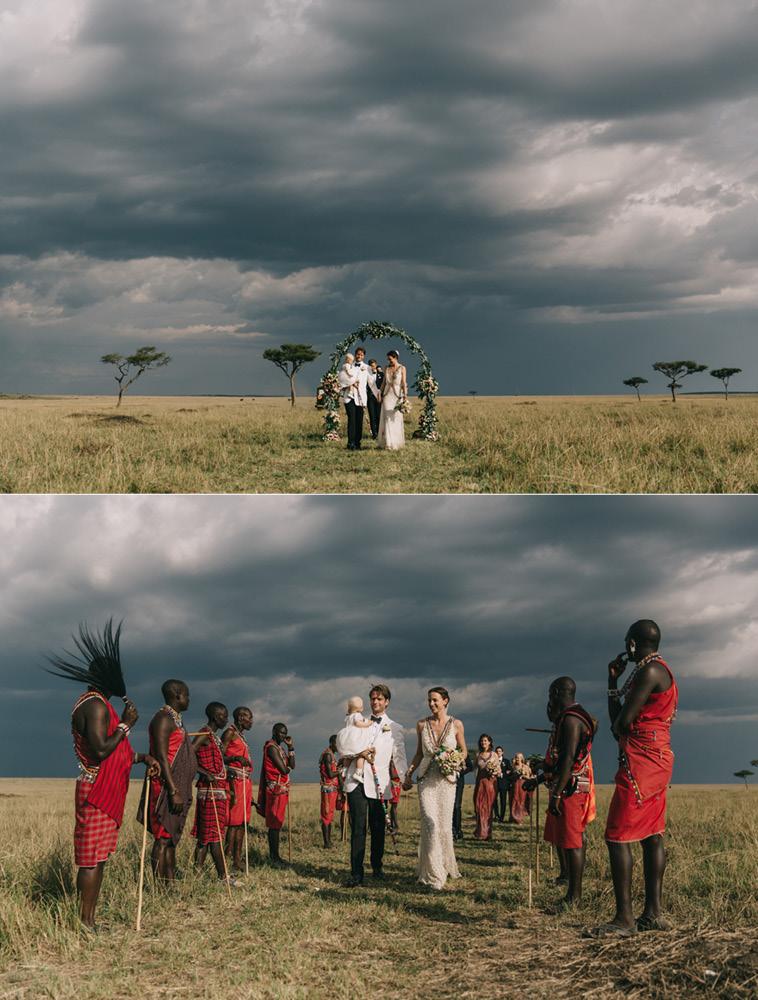 The Maasai insisted on doing an honour guard for the wedding ceremony.​ 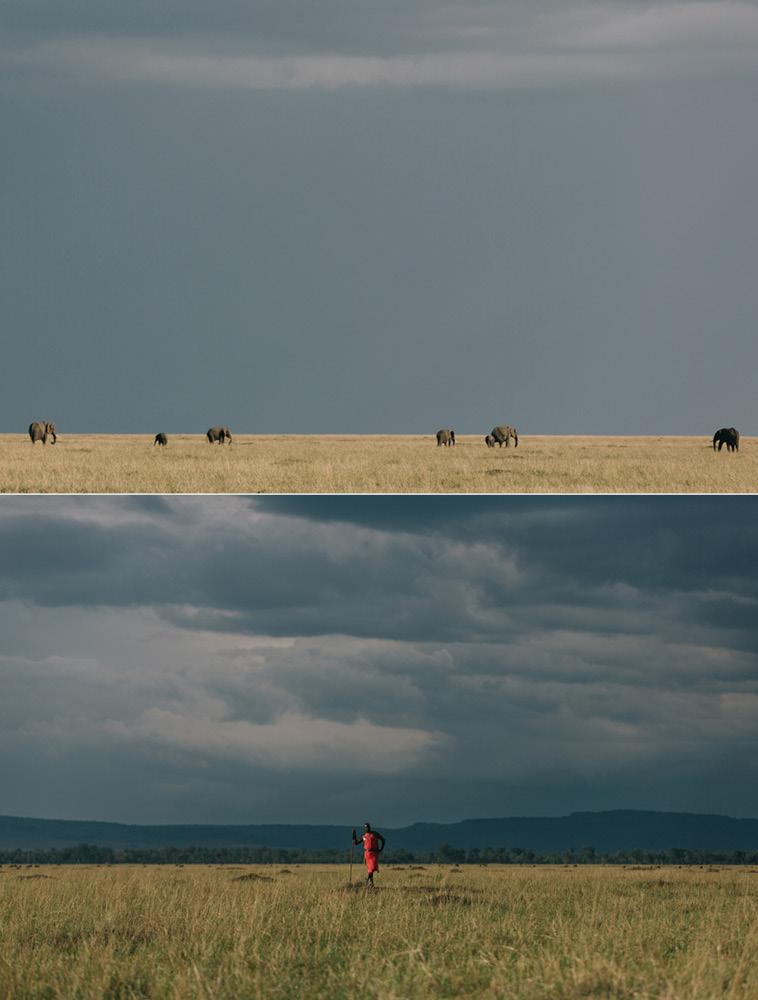 The officiant wore a Maasai shuka as stole during the ceremony, which was another gift from the Maasai. 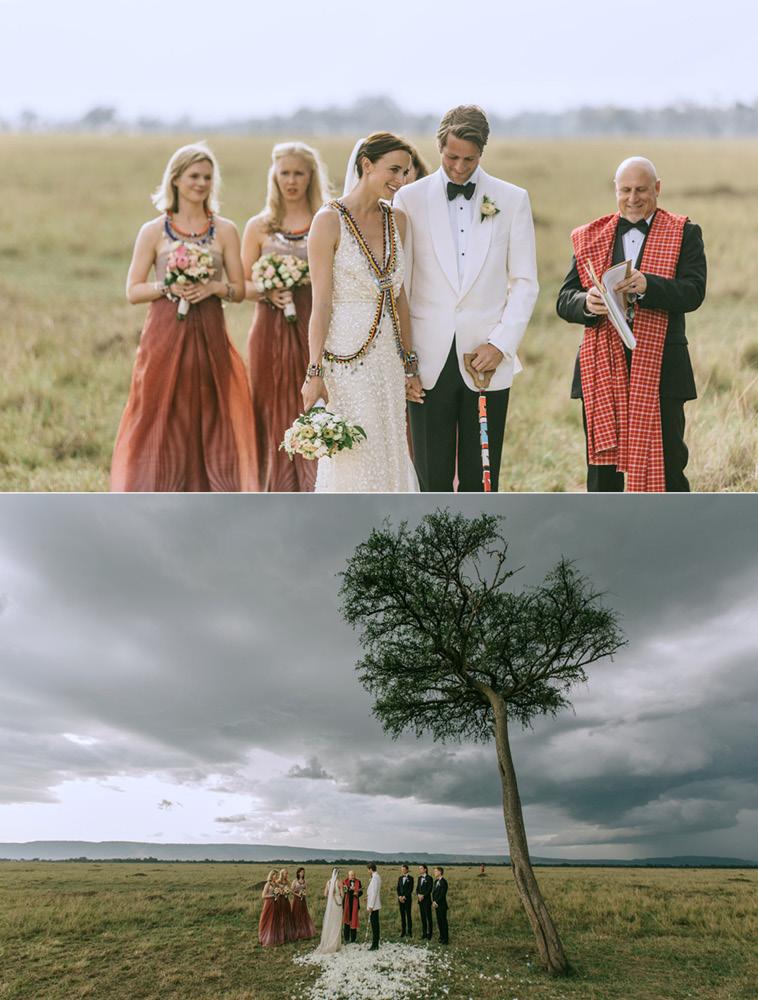 Mother Nature made for the most glorious venue setting one could ever imagine. A true testament to no matter how much decor you add to a setting, it cannot compete with endless rolling grasses and soft watercolor clouds. 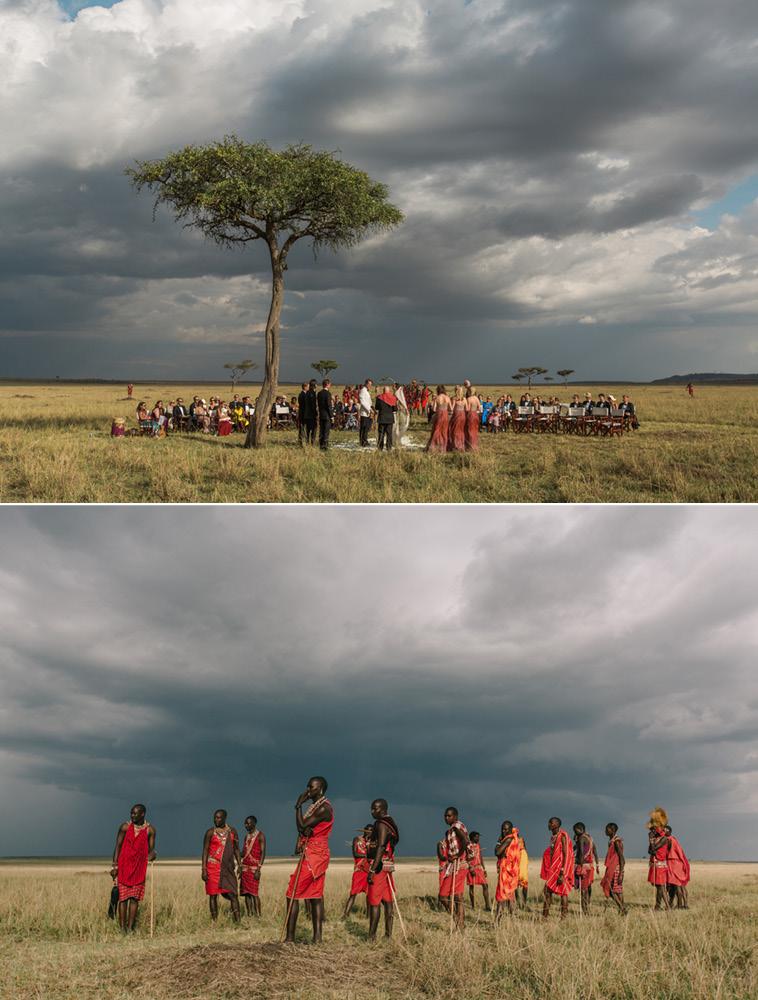 As the bride and groom walked down the aisle, the white rose petals at the center of the ceremony had attracted a number of white butterflies that circled around them. As they were finishing their vows a bird flew up, stopped for a second midair, and then continued up the tree. 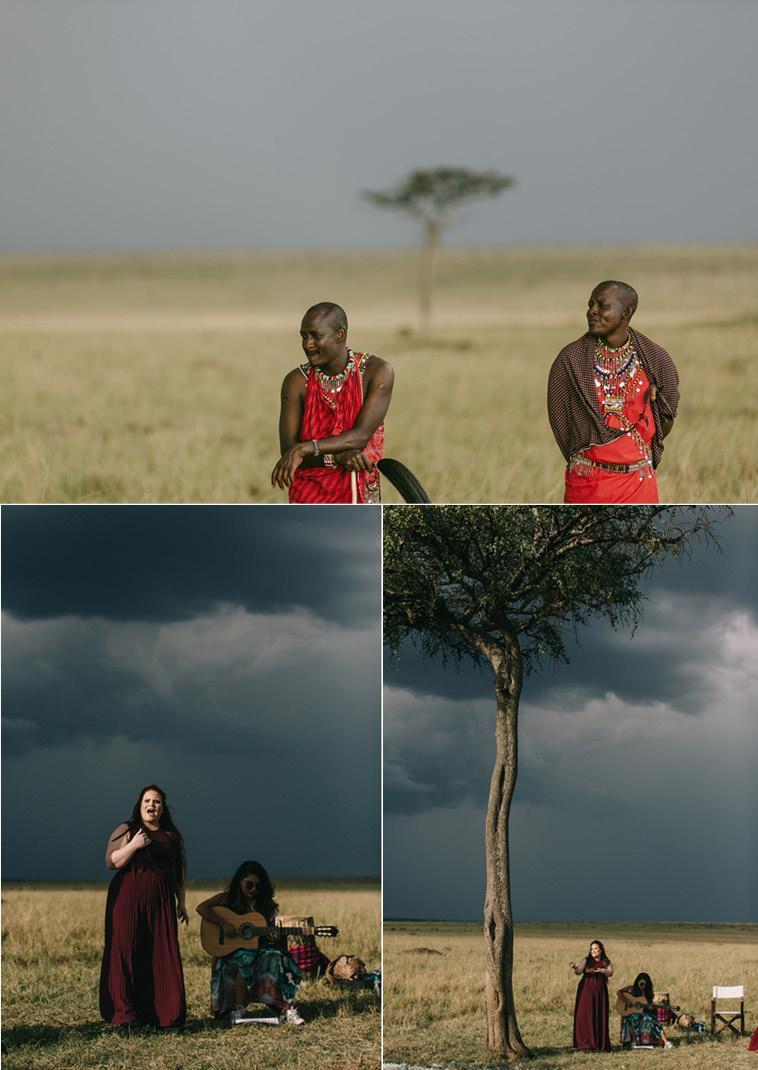 Sandra Wikström sang three songs, first to symbolize the past “I was made for loving you” by Desmond Child, Paul Stanley, and Vini Poncia, second to symbolize the present  “All of me” by John Legend, and finally “He lives in you” by Lebohang Morake to represent something greater and the future 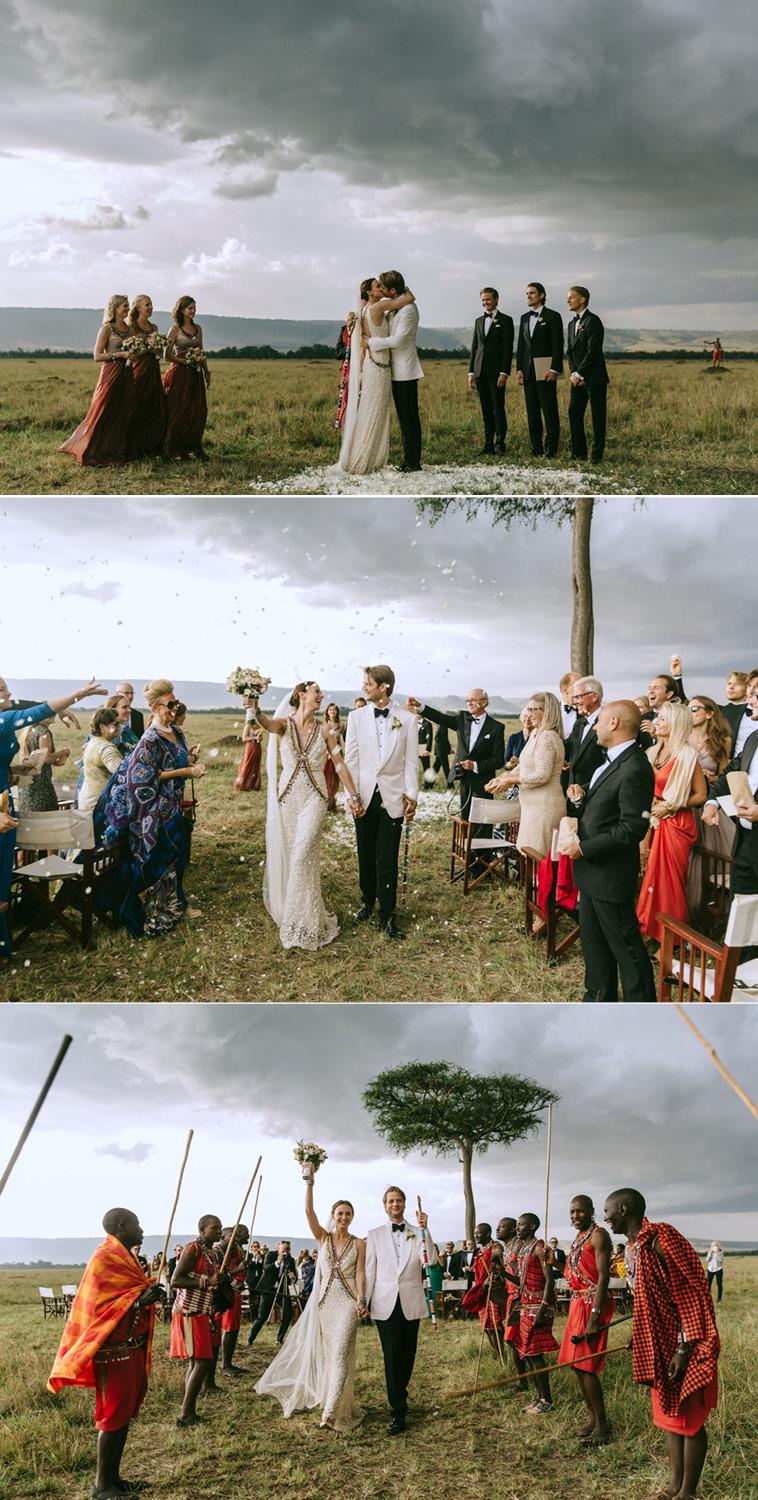 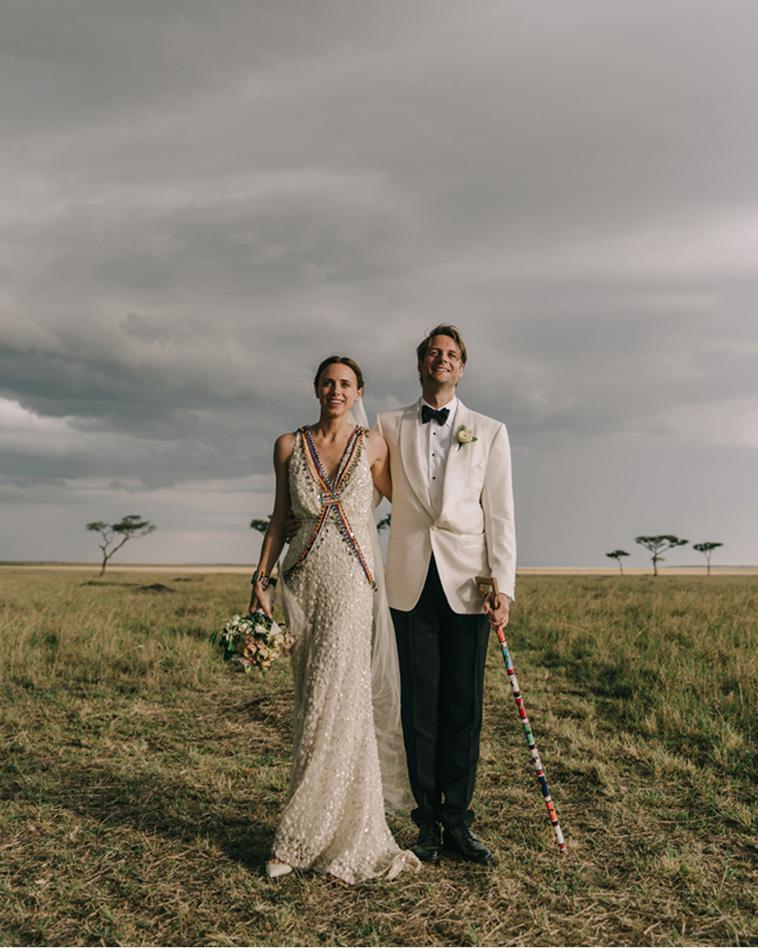 The Storm Rolls In

The dark stormy clouds added drama right before the ceremony, which only added to the beautiful vows and made for some spectacular images. 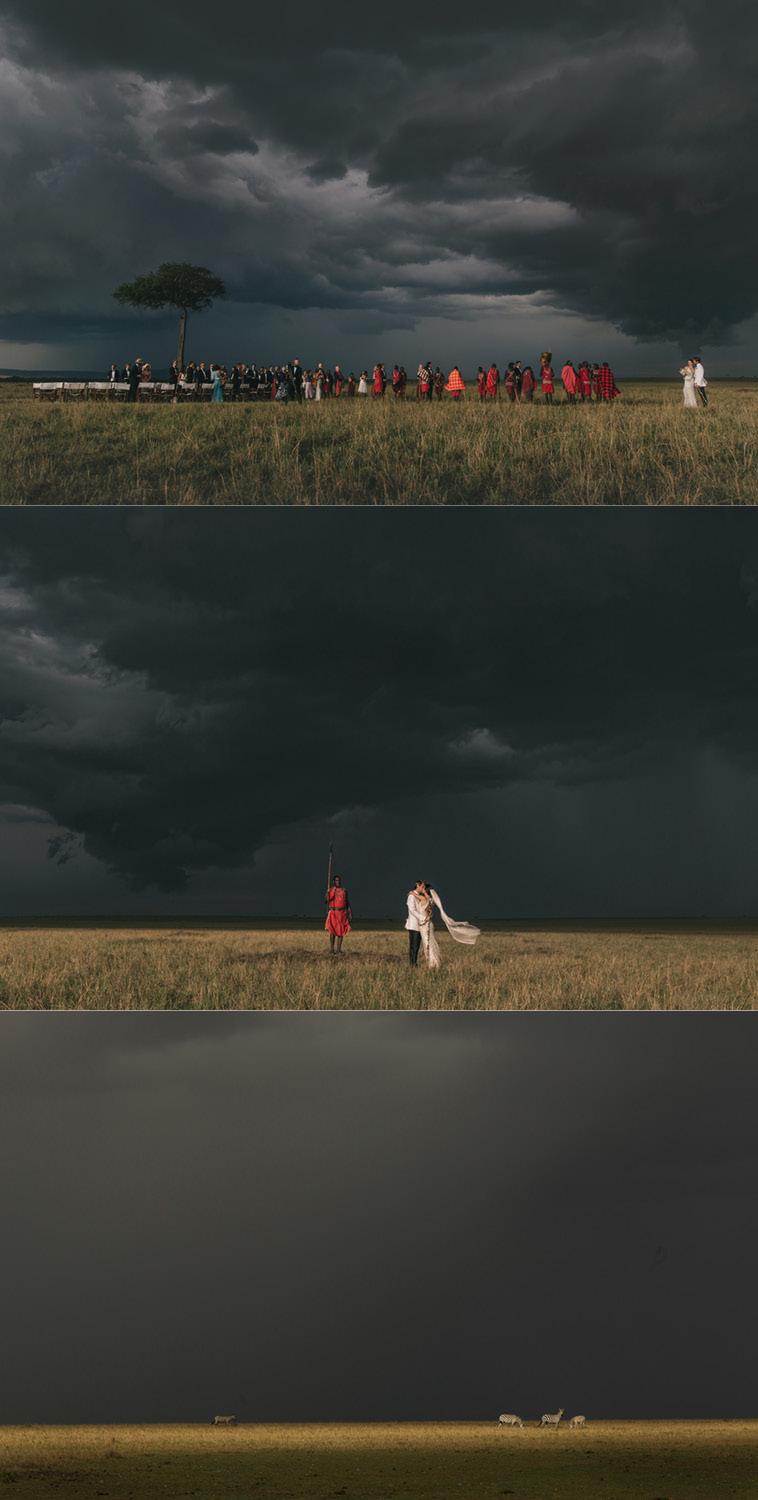 "At the end of the ceremony the sky was almost black. As we were walking back down the aisle, a herd of wildebeest stormed across the savannah and the wind started blowing. Mere minutes after we had walked up the aisle the storm hit us and the strong wind lifted the veil. Just as we got into our car the sky opened and huge raindrops started falling." - Jonas Peterson (photographer) 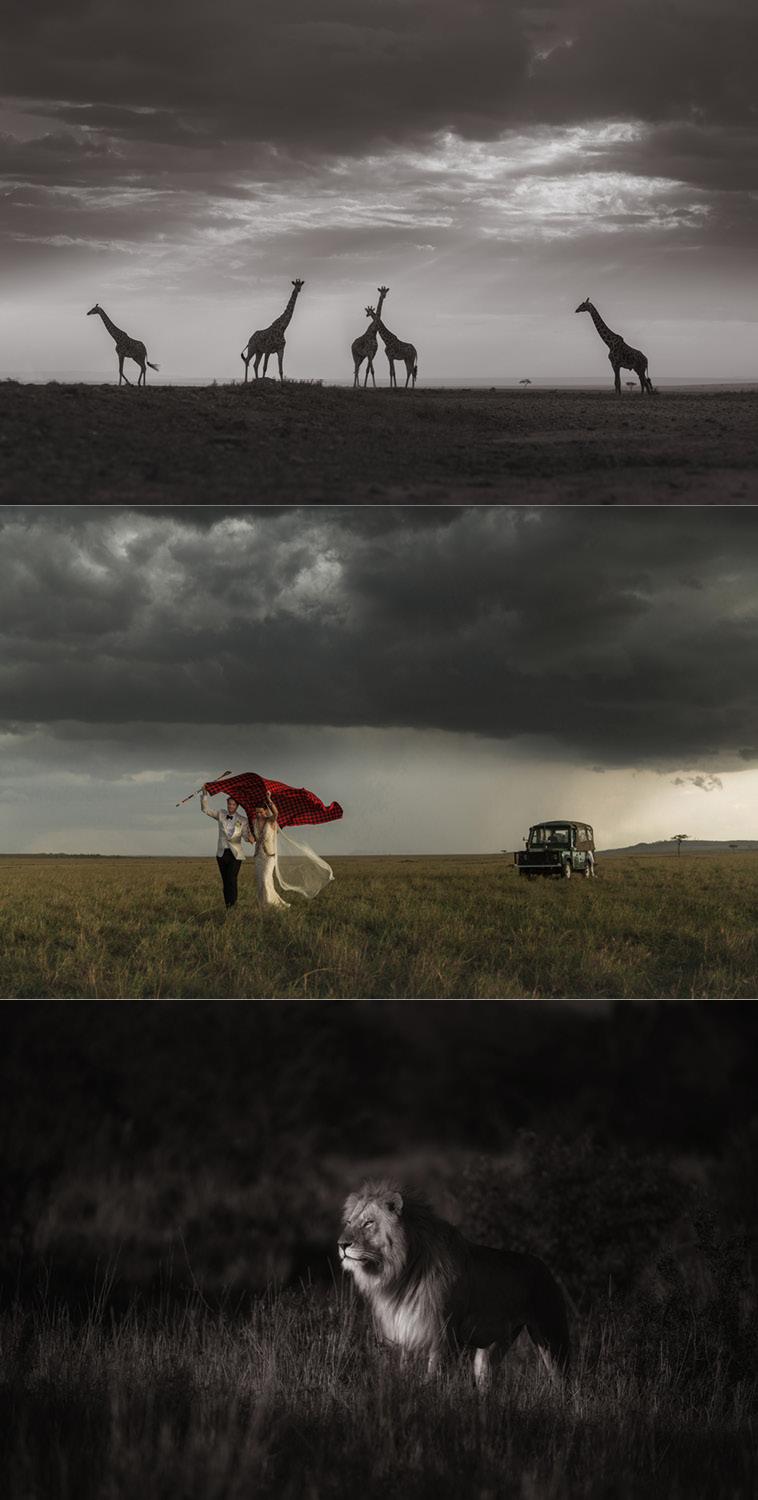 "All guests stayed at the Governors Camp in Masai Mara and the various dinners and receptions were held there too.  It’s incredibly special to visit Masai Mara, you get so close to the animals, you literally have them on your doorstep. Or tentstep, since you stay in tents. At night you can hear elephants and hippos walking around in the camp, you’re always safe though, there are guards around." - Jonas Peterson (photographer) 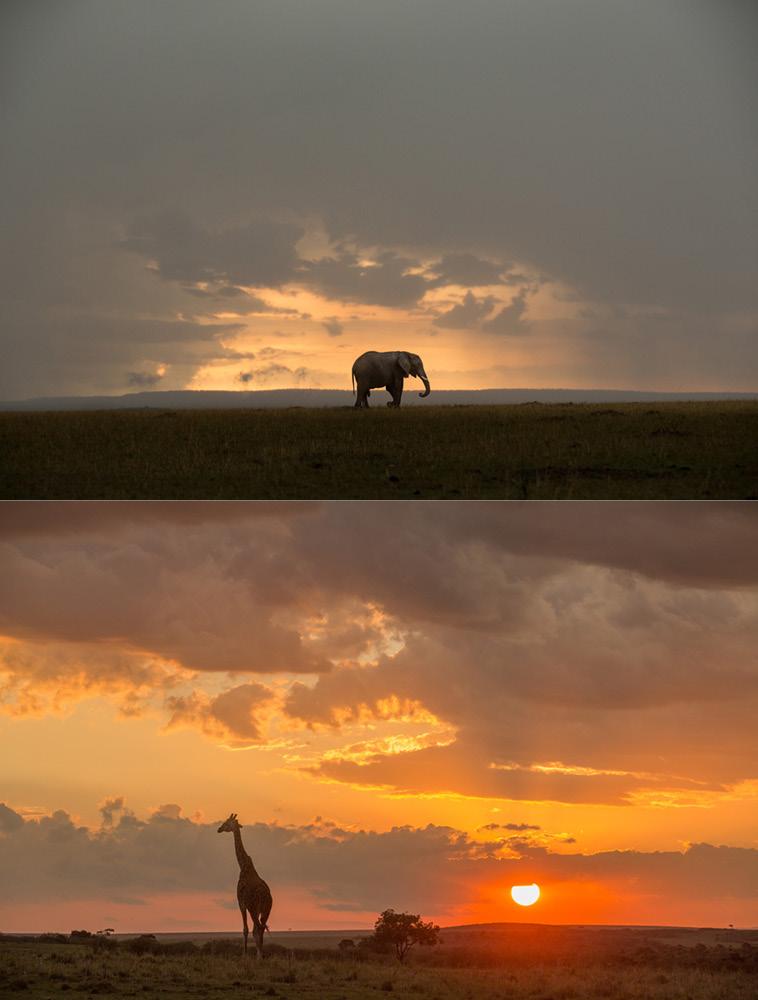 "Tracy Wolmarans at Governors Camp made us all feel extremely welcome, both vendors and guests. I have vowed to come back, hopefully someone will book me to work there again, but otherwise I’ll visit anyway." - Jonas Peterson (photographer) 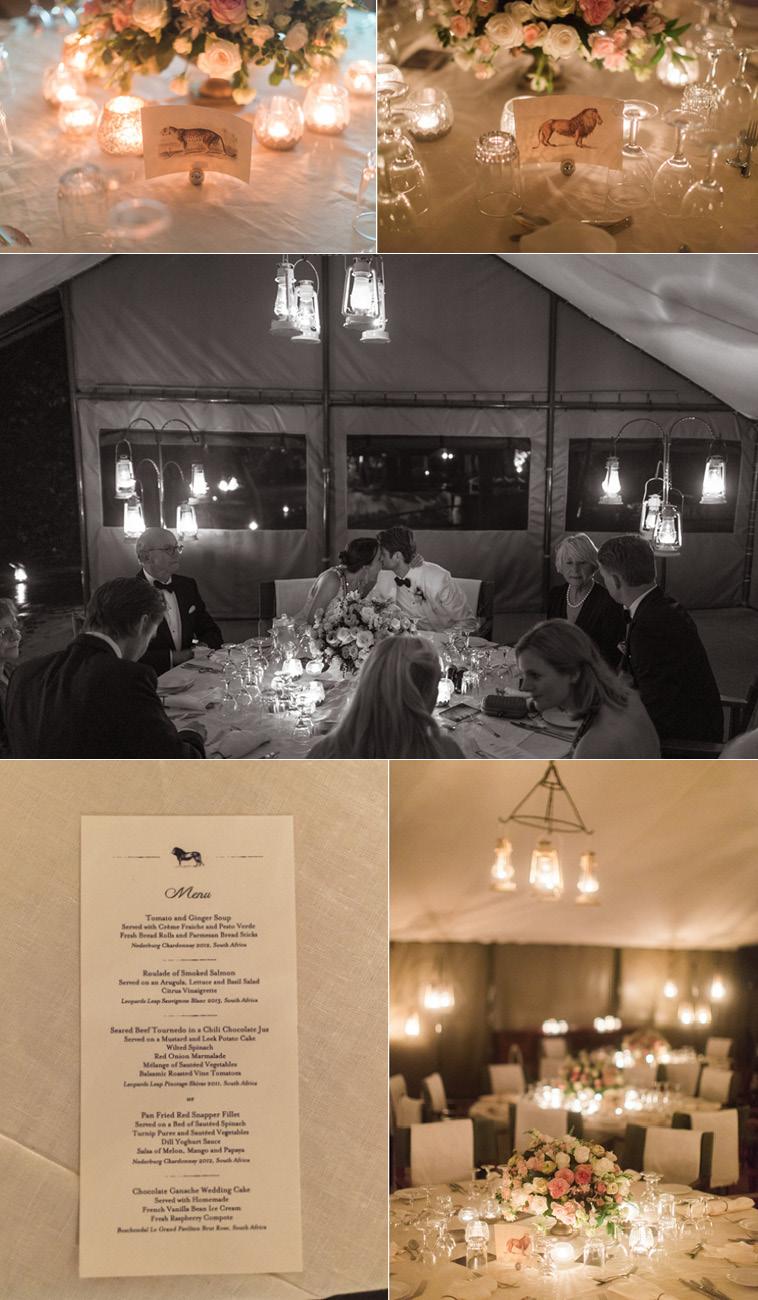 The tables in the safari tents of Governors’ Camp Masai Mara, were adorned with old style garden roses and eucalyptus from Oserian in Naivasha, Kenya, in collaboration with a local florist.

“If I know a song of Africa, of the giraffe and the African new moon lying on her back, of the plows in the fields and the sweaty faces of the coffee pickers, does Africa know a song of me? Will the air over the plain quiver with a color that I have had on, or the children invent a game in which my name is, or the full moon throw a shadow over the gravel of the drive that was like me, or will the eagles of the Ngong Hills look out for me?”  ~ Karen Blixen

Over the last 8 years I’ve been incredibly lucky, I’ve shot weddings all over the world for people from all walks of life. The stories I’ve seen have brought me to tears, they’ve made me laugh out loud and they’ve made me believe that love truly is all we need. I’ve learned to listen to the stories presented to me. I’m not there to tell mine. I’m there to tell yours. - Website

Winter in Finland, Through The Lens of a Travel Photographer

Over 2,000 of You Agree, This Is the Hottest Safari Lodge of the Year